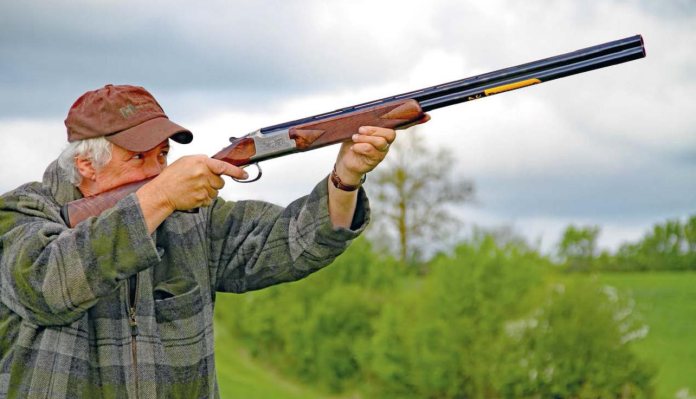 The B525 (made in 2015) is part of the fabled Browning series of over and under shotguns that span some 80 years and is the fifth generation of the legendary B25 shotgun. This new incarnation of the traditional 525 action is the perfect game gun, with lightweight and fast handling characteristics coupled to traditional lines and an ultra-reliable action. In addition, it comes with an American walnut pistol grip stock and tapered forend. There is also some nicely detailed laser-cut engraving of pheasants, partridge and woodcock to the action faces. Best of all, the 20 gauge version on test is offered in three barrel lengths, has lovely lines and is coupled to a 6mm top rib for fast target acquisition.

All in all, this latest version of the B525 is quintessentially stylish, robust and steel shot proofed, making it future proof and capable of harvesting any game you hunt with it. This gun comes fully cased with a set of chokes, choke key, trigger lock and manual, plus an automatic safety comes pre-fitted, all for £2195.

This is where this model really shines, as the overall balance characteristics are superb. I prefer the B525 over the heavier 725 models, even though the former kicks a bit more. However, this 20 gauge version works in harmony with the stock design so recoil is light.

You have a lovely walnut stock of American Grade 5 to 6, which means a really well figured and interesting stock pattern to both rear and forend. Not as highly figured as a Turkish blank of the same grade but still really good, plus everything is finished with a gloss oil finish. As I said, it fits so naturally with its 14.75” length of pull, drop at comb of 36mm and drop at the heel of 56mm.

The pistol grip is nicely raked and quite slim, plus shows some good chequering for adornment and added grip. The same is mirrored on the forend, which is your traditional tapered design that offers many different grip options dependent on shooting style, stance and shooter size. Finally, the Inflex rubber recoil pad allows a swift mount without hanging up on your jacket, yet grips when in the shoulder and lessens any recoil from stout loads.

As stated, the B725 is a full-sized action, whereas the B525 is lighter and perfectly suited for Game or Hunter models. I personally really like the 525 series as it offers excellent value as well as superb engineering and manufacture. There is a real sense of overall good fit and finish with very good metal to metal and wood to metal finishes.

The action has a typically Browning full-bodied design that incorporates the familiar monobloc system with solid and reliable lock up. There is no stiffness and sloppiness when breaking the action via the smooth top lever, just wellengineered opening and closure.

As a whole, the steel action is slimmer than the 725 but has the same type of operation and locking arrangement, with steel locking lugs protruding through from the barrel lugs and a relatively deep action profile. This is a classic Browning trait and reassuringly strong. Externally, the action faces are coin finished and are adorned by laser-cut game scenes. These are well executed for a gun at this price point.

Internally, there is an inertia type striker system and the sliding barrel selector, which forms part of the safety catch, operates with a left position for the top barrel and right for the bottom barrel firing first. The ejectors are also well finished and polished, moving freely in their recessed cage and monobloc grooves. They are welltimed and powerful, meaning there is no chance of a stuck case. The sliding safety on this model is automatic, so you have to pay attention and take it off before you shoot. Yes, it’s safe but I do prefer a manual safety.

This new Game Tradition is steel proofed and bears a set of fleur de lys proof marks, plus it is chambered in 76mm (3”) so is good for any 20 gauge ammunition. You have a choice of 28, 30 or 32” lengths, which is a nice choice for those wanting a shorter walked up gun or those long barrels for more swing and a bit more oomph.

I really like the 6mm rib with its single large bead set at the muzzle, as it does not obstruct too much of the game you are sighting and allows a very fast target acquisition. The overall finish is the usual deep lustrous blue, which is surprisingly hard wearing and suits this style of gun with walnut stock much better than a dull hunter finish. You have the usual multi choked system coupled to Browning’s Back Bored Invector Plus system and the shotgun comes with Invector Plus: Full (F), 3/4 (IM), 1/2 (MOD) and 1/4 (IC) choke options.

The back boring lessens any deformation of the lead shot in the barrel and thus provides a better, more even shot pattern down range. Also, the internal dimensions are slightly oversized, which again gives a smoother passage of the wadded shot column. Not only does this increase velocity due to less friction but recoil is reduced due to the smoother, wider bore surfaces and ease of the shot column passage down the bore. A nice additional feature is that the bores don’t seem to foul as badly as some tighter barrel systems on other equivalent doubles.

No surprises when I say this Game Tradition handled like a dream. It’s effortless, in that I mean everything is automatic and instinctive from the hold, shouldering and eye alignment to the final swing and imperceptible trigger pull. Personally, I would go with this 20 gauge version as recoil is really light. Even with stiffer 32-gram loads, it is very easy on the shoulder due to the B525`s great stock geometry.

I tried some pattern boards at 30 yards on half choke and first up were the Gamebore Traditional Game cartridges. This load is available in 24-gram (shot sizes 6 or 7) and 28- gram loads (5, 6 or 7 shot). We shot the 28-gram No 6 shot load with a fibre wad packed into its 65mm case. On the pattern board, the B525 totalled 198 strikes, with 53 inner and 145 outer hits. Quite a nice distribution of shot with very few holes for game to escape through.

Next were the Eley VIPs, which produce a high velocity of 1425 fps. I had the 28- gram No 6 loads with fibre wads on test. These shot very well with a slight upward bias above the sightline and 72 inner strikes and 113 outer hits. So, a dense and even total pellet spread of 185 - Impressive.

Gamebore Blue Diamonds make a superb clay or simulated game cartridge, which this 525 excels at. With 21-grams of No 7 shot we had a total of 168 pellet hits within 30”. There were 111 in the outer zones and a good cluster of the remaining 57 within the 15” inner sector. They were light on the shoulder and very easy to shoot well.

A good hard-hitting game load would be the Hull High Pheasant Extreme with its 28- gram loading of No 5 XTRM hardened shot in a 70mm case and with fibre wad. There were a total of 167 pellet strikes, with 102 outer and 65 inner hits all of which were very evenly distributed and bang on the sightline, making this 20 gauge a good pheasant gun on the line.

It’s hard to knock the B525 in any calibre or configuration as it continues to be a really good shotgun that’s nice to shoot and easy to handle. The handling characteristics are ‘just right’ and marry up a good swing with pellets connecting with the target. 20 gauge would be my choice as recoil is low, yet there is enough punch for most game, plus the calibre and gun produce some really good patterns down range - What’s not to like?