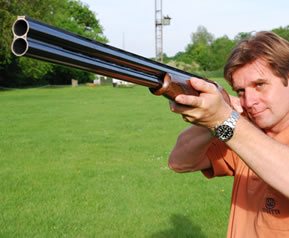 The Browning Heritage attracted a lot of attention when it was first launched some months back. There has been much demand for the new gun, moreover.  There are two giants in the firearms industry as far as smoothbore guns are concerned, Beretta and Browning. Beretta make more shotguns these days; in excess of 150,000 a year - an extraordinary number. Browning don’t make quite as many (well, their market share in the UK is certainly a smidgen less, but they have an equally dedicated band of followers. It is one of the odd aspects of the shooting world, that we tend to be very loyal to one brand of gun. I tend to be a Beretta boy, but my gun cupboard contains a few Brownings as well (not to mention a Winchester or two).

‘The Browning Boys’ (like the Miroku fraternity) are certainly especially enthusiastic about their firesticks, nearly all made - if over and unders - to the famous Superposed design that John Moses created in the 1920s (he died at his work bench perfecting it). It was a revolutionary design, a streamlined over and under that could be made for a reasonable price (though the Superposed was never a cheap gun). Now, we have Brownings made in Japan (by B.C.Miroku), guns made in the Custom Shop at Herstal in Belgium, and the B.C. Miroku line of Browning inspired guns.

The new Heritage is a Miroku made gun, but it tries to bridge the gap in some ways between the Japanese and Herstal made guns.  Based on the 525 (and, save for the sidepates, sharing all its features), it is the Browning answer to the Beretta EELL (which is, in essence, a 600 series/silver pigeon guns with sideplates). But, do not let this mislead you, the Heritage is a gun with a very distinct character of its own, and one which will be iconic in the future I suspect.

Andy Norris of Browning International comments: “This is Browning’s attempt to close the gap between the B525 Prestige and the B25 range. At the moment the Prestige sells for something over £3,000 and B25s over £10K. The Heritage sells for just over £4,000. The tight scroll and game scene engraving is especially pleasing to the eye and will appeal to anyone wanting a true deluxe model but without having to pay a king’s ransom.”

In my own discussions with shooters, I have already met some who really liked it and a few who were not quite so impressed. My first impressions are, honestly, a little mixed. The gun is clearly extremely well finished, but I thought it appeared quite angular, notably in its action design. The Browning, of course, has a full width hinge pin and a full width bolt and bite, unlike the Beretta and Perazzis of this world. This makes the action a little deeper, not quite as svelte as Beretta and Perazzis in 12 bore form. But there is no doubting the strength of the Browning design.

I really could not fault the quality of the gun on first visual inspection. As importantly, it came to the shoulder extremely well. The grip – something Browning always seems to get right partly in consequence of the action design – felt especially good. I also liked the comb shape.  The Browning sporting stock design is one of the best. There is nothing eccentric about it, no strange humps and bumps. It is a classic form that has been much copied.

I will make two observations. First, the grip seems to suit just about any hand, including big ones. Second, the comb is tapered, but is still wide enough to offer the required facial support for consistent clay target (or game) shooting. My only critical comment on the practical front (a very easily remedied one) is that the stocks on Brownings tend to be a smidgen low at heel. 2 ¼” is the standard measurement for drop and the test gun is no exception – my preference for a shelf measure is 2 1/8”. That said, 2 ¼” is often better for those with large heads – and Browning’s (and Mirokus) especially well suit those of larger stature. The length of pull is ideal at 14 7/8” and there is slight right-hand cast. Brownings always seem to be fairly straight.

The barrels on the test gun are chambered for 3” (70mm) cartridges as most modern Brownings (save the 3 ½” auto models, of course). They come with a set of well machined Invector chokes (the shorter style rather than long Invector Plus type). They are quite tight bored at 18.5mm (many of the guns in the range are now back-bored at 18.8mm) and proven for steel shot. Indeed, all multi-choke Brownings are now steel shot proofed, only guns with fixed chokes are subjected to standard proof. The monobloc barrels on our Heritage also have the new Fleurs de Lys mark indicating their superior proof.

By way of interest and historical note, I might comment that monobloc barrels are fairly new to the Browning range, they held on to the demi-bloc system until mid way through the 425 series of guns.

I was not quite sure about the aesthetics of the Heritage, but there was no doubting the way it shoots. It was a solid and steady gun. Not quite as lively as the big Perazzi, as tested elsewhere in this issue, but very predictable. It controlled recoil well and felt comfortable in use. I found the grip and comb shapes good as already discussed and the schnabel forend, not my first choice on a sporter, suited the gun well.  I also liked the 10mm sighting rib with centre channel, though the mid-bead is an unnecessary adornment in a sporter.

This would not only make a good gun for clays, but a good high bird gun as well. It will cope with the recoil of 32-36 game loads and will take all the abuse that other 525 style guns will. With regard to aesthetics, the engraving looks good, but the design is a little angular as noted – I will let you decide. Value for money – not bad. Shootability and quality – excellent. This may not be your gun, it’s an individual gun, but I think Browning will have a commercial success with the Heritage, nevertheless. It is available in various barrel length options, but my advice would be to stick to the 30” gun as tested.

My thanks to Lyalvale Express for supplying the cartridges used in this test and to Andy Norris of Browning.