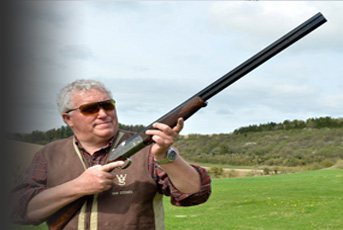 Be warned, 28-bores can be highly addictive! For many years I regarded them as nothing more than a beginner’s gun, and a fairly pointless one at that. Considering this calibre to be in a no man’s land between the beginner-friendly .410 and the next logical step; the 20-gauge. However the first time I shot one was something of an eye opener, within a handful of shots I immediately felt at home with its responsiveness, lightness and sheer pointability.

Yes, it may throw a smaller tighter pattern than its more ‘grown-up’ peers, but in my opinion more than any other calibre it becomes part of you as you shoot. This takes me back to my original comment when I reluctantly handed back my first taste of 28-bore shooting to its owner….effortless

The Guerini Maxum has been on the market for some time but continues to be a strong seller. Available in 12, 20, 28 and .410 guises with game, sporting and trap configurations to match your preference. The test subject is a 30” game gun, based around a variation of the tried and tested, Brescia-style, Italian boxlock action. A wide tapering flat bolt bites forward from the bottom of the breech face, locating into a slot under the chamber in a variation of a theme used by Browning.

It’s not a break through design but by sticking to a proven recipe it is easy to work on, reliable and should take pretty much everything you can throw at it! Though the trunions are replaceable if you do end up shooting telephone number quantities of shells through it.

The recoil-operated single trigger is of a plain machined finish, which I prefer, gold plating is all very well, but on some guns it can smack of desperation. Pulls are crisp at a shade over 4lbs though the blade isn’t adjustable unlike its clay busting siblings. The safety and selector sit where you would expect them to be and it resolutely refuses to be caught out even when I tried to confuse by trying to leave it betwixt the two.

The barrels are very well finished and for a gun of this price are unusual in having solid ribs, the top one tapering from 8-6mm and being finished with a brass bead. This gives it a traditional look, adds a little weight and is of excellent quality for a field gun. I have only to peer down a few ventilated ribs to see dents, dings and bends from unfortunate encounters with gate posts. The bores are chrome-lined and chambered for 2 ¾” loads allowing the use of 28-gram shells and have a bore of .554. A full set of five chokes are supplied.

The woodwork is well finished, the chequering at 26 lines per inch allowing a good purchase as does the semi pistol grip, another refinement not often found on guns purporting to be for field use.  In years gone by I lusted after English stocked over and unders, having shot with one as a youth but the subtle yet effective semi pistol is in my opinion a good compromise though I would still like to try it with a straight stock.
A wooden butt plate continues the game theme whilst at the other end a Schnable forend with push button release once again sets it apart from the crowd. Drops are 37 and 57mm at comb and heel while length of pull is a fraction under 14 ¾ inches. All pretty standard but effective nonetheless as those who tried it found it fitted well enough for an off the shelf gun.

Beauty is as they say in the eye of the beholder, but you would have to be a cold hearted soul to call this gun ugly. Its looks are quite striking and the many small details already mentioned come together with the eye-catching, Giovanelli-designed floral scroll engraving on the pin-less side plates to make a very attractive package indeed.

Of course all of this is fairly pointless if it shoots like a rusty nail but I can confirm that there are no concerns in that department. I can vouch for that as the test gun is in fact my own and after nearly three years of ownership I still consider it my pride and joy. Yes, being a small bore it does need to be controlled a little more than a 12 or 20, but once you get used to that it is capable of taking on both clay and feathered targets at impressive ranges, having tried an earlier vent rib version I think this solid rib equipped gun is more stable. The extra weight up front being a useful ally when it comes to keeping a swing going on those long shots.

Reliability has been faultless and I have fed it everything from 14-grams through to a full ounce, though for clays I have settled on the Gamebore 21-gram # 9’s as my personal fave! 23 or 24-gram #6’s do the job well enough for most things that have a pulse, but I keep a few 28 #5’s for high birds. The 6lb 6oz weight being enough to absorb the extra recoil without becoming unpleasant. My only regret is that it doesn’t get the use it deserves, when it comes to shooting clays I like many others wimp out preferring to play the numbers game that says that if you are chasing a score then a 12g is the only logical choice. However when it comes to fun there is little to beat it, and like all 28 gauges it is seriously underestimated as a killer of game.

The Maxum is a lot of gun for the money, even allowing for the price hikes in recent years due to the Euro exchange rate it still compares very competitively with its rivals. I may be somewhat partisan about this particular gun but I am no lone voice; there are plenty out there and the gun trade continues to see sales grow. But remember my warning; one shot and you might be hooked!

1, There was never a shortage of people wanting to try the 28-gauge Caesar Guerini Maxum Game, maybe you should too!

2, The semi pistol or Prince of Wales grip suits this little 28-gauge no end

3, The action though not ground-breaking is none the less reliable

5, The pin-less side plates are a dream canvas for any engraver

6, The Schnable forend, and push button release are nice touches