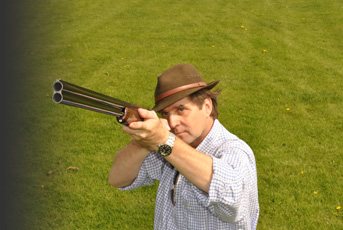 With the game season approaching and with it, my birthday on the ‘Glorious Twelfth’, I thought we might look at something ideal for the wee grouse, or, indeed, the odd summer woodie or walked up bunny. Our test gun is the rather smart, Round Action Guerini 20 bore known as the ‘Ellipse Evo’. Although far more 12 bores are still sold than 20s, this calibre has become increasingly popular with live quarry shooters. I use Guerini 20s myself – predominantly 32” guns and have nothing but praise for them. The test gun is available as a 12 too, which is my new firestick for walking up, as I prefer a 30 over a 32” because of its fast handler characteristics. But don’t want to drop to a 28” gun, even where speed is important, as I like the increased pointability of a 30”!

The Evo has a solid rib and a retail price of £3,775.  First impressions are excellent. Indeed, if you do not like the aesthetics of this elegant gun, I would be most surprised. The action is coin-finished which gives an impression of style. I wouldn’t say that it was understated, but there is not too much bling either. There is a mix of tight scroll and more open floral engraving and it all looks good. The wood has reasonable figure. Bluing is deep with good preparation work evident before application. Wood to metal fit is well up to standard too.  The Evo looks very svelte and hits the scales at about 6lbs 9oz, is slightly muzzle heavy. It is clearly intended as a game gun. The forend is of slim but rounded pattern, a style many people like better than a Schnable – not least those who prefer to take a grip further forward with the front hand. Not I hasten to add a Yardley recommendation, because it can cramp the swing. The grip is of semi-pistol pattern, but with an unusually open radius. The only thing that I was not quite sure about was the wooden butt plate, which is a bit darker than the rest of the stock and therefore stands out.

This Guerini certainly has style. Indeed, it is one of the most attractive guns that you will see on the gunshop rack these days at this price level. What of its other features? The neat push button forend release gets a thumbs up, as does the solid, tapered, rib. Some Guerini’s have a long tang on the trigger guard, but I have no quibble with the fairly plain and simple one here. I also liked the elegantly shaped, silver polished, trigger blade. My only negative being the safety thumb-piece is a little small to be positive on a cold or wet day.
The barrels are monobloc, with the joints between tubes and monobloc being tight (Guerini seem to be taking real care in this area now). The Round Action is chambered for 76mm (3”) shells – which always inspires confidence. Inside the finish is as impressive as out. The forcing cones are of medium length and the 15.9 mm bores are not too tight – though my preference would have been for 16 mm. The barrels are chromed and equipped with nicely machined multi-chokes. Joining ribs are solid as noted and extend all the way back to the monobloc. The subtly tapered sighting rib is finished with a metal bead at the muzzles. This is by far the most practical thing on a game gun as a solid rib is not as prone to denting as is a narrow ventilated type.

The action is of typical Italian pattern and based on a special forging, which pushes the cost of the gun up a little as it has required re-tooling to manufacture it. It has trunnion hinging and helical springs power the hammers. The single trigger mechanism is recoil-activated, and this model does not have a selector. Trigger pulls were fine. The bolting system is Browning-inspired involving a full width bolt coming out of the bottom of the action face and engaging bites beneath the bottom chamber mouth. This seems to be the most popular system in Brescia outside the Beretta, Perazzi and Gamba factories. The decoration and shape of the action is much to my taste. It suits this gun well. I am not a particular fan of the machine engraving of game birds that adorns so many shotguns these days. It can look a bit naff unless done really well. On a mid-priced gun, I much prefer scroll – especially today as it can be made to look quite spectacular thanks to clever laser technology. Soon, as far as scroll is concerned, I doubt if you will be able to tell the difference between machine and hand work unless you are an engraver.

The stock of this Guerini is especially racy in its style and proportions – something a little different but handsome. The wood has reasonable figure as mentioned, but, it is straight through the grip which is always a good thing for strength. This must never be over-looked when assessing a stock, as lots of swirling figure through the grip area weakens the wood significantly. The finish is competent. Chequering is neat as well and almost certainly executed by laser. The butt sole is grooved horizontally. This is well done, but chequering would be my preference, or a simple rubber pad (which might easily be fitted). Slotted screws rather than the Phillips type grace the butt plate, happily.
The measurements of the Evo suited me quite well save for a slightly low comb. Stock length is just under 15” with about 3/16” extra at heel and ¼” at toe – good measurements for most middle-aged blokes (who don’t usually want too much toe). Drop at comb is 1 1/2” and at heel 2 3/8” – a bit low for most (unless you happen to have a large, long, head). There is slight cast for a right right-hander.

The gun shot well, but, I am biased, as I like these Guerinis. I used it with both light and heavy 20-bore Express loads. I often push 30 or 32-gram payloads though heavier, longer, 20s, with 24-grams being the sweet load for this gun, but recoil was not excessive with an ounce (28-gram) either. It was all the things a good 20 ought to be. What more is there to say? If you compare it to many modern round action guns (though I should, perhaps, more precisely, say round body) with a bit of extra finish, it looks good value for money. Mind you, so does the square bar, side-plated, Guerini Maxum at a whisker over 3K. A plainer version of the EVO is available for £2,775 with a colour, case-hardened action without other embellishment.

• Guerini does produce some excellent guns

• 12-bore version if you prefer