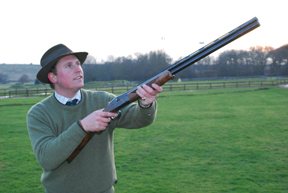 The test gun is a Guerini Magnus 20 bore over and under. It is another gun taken off the shelves of the West London Gun Room at Northolt, and, once again, my thanks to George Juer for his help in facilitating this test.

The Magnus has 30” multi-choked barrels, a game rib, and weighs in at 6lbs 11oz. This is a fraction heavy for a 20 by old world standards, but bang on the money for a modern 20 in my opinion. 30” barrels are my preference on 20 and 28 bores adding controllability to guns which can otherwise be a bit too lively. Such guns are increasingly popular, moreover. It is no accident, I suspect, that the modern machine made 20 is, weight wise, almost identical to the classic London best 12. It shares similar handling qualities as well.

First impressions of the Magnus, meanwhile, are good. It has a grey action which sets it apart from the pack, and the machine engraving is pleasant. The wood is better than average. The semi-pistol grip stock is my favourite style as well. On picking the gun up one notes its sensible weight and excellent semi-pistol grip. It comes to face and shoulder well – no complaints in any department.

We have tested a number of Guerinis in these pages, their success in the UK is down to their attractive looks and finish, sound basic design, and sheer value for money. The great efforts made by Mike Mansfield and Kevin Gill of Guerini UK in promoting the products should not be discounted either. They have worked very hard, but they started with a good product which has made their task easier and they have achieved significant market share since starting only a few years back.

Readers will know that I am biased in favour of 20s (and especially Guerini 20s as I use one for nearly all my game shooting now, though my Beretta EELL gets the occasional outing as well). I use 20s for instructional purposes, and I enjoy recreational clay-busting with them too. If the score is not the absolute priority, there is a lot to recommend these smaller bore guns, not least the fact that they are so much fun to use. Do not misunderstand though, when I am serious about posting scores I pick up a 12… BUT, I do prefer a 20 or 28 for game shooting these days. Save for using my Beretta semi-auto for pigeons, I always use a small bore for live quarry now. I just seem to get on better with them (though I tend to use long-barrelled, heavier, guns with fairly heft payload cartridges - 28 or 30 grams in the case of 20 bore).

Let’s get the test Guerini under the microscope. The barrels are built on the monobloc system - no surprise there! Nicely put together, they are chambered for 3" (76mm) cartridges (not that I ever advise their use even though I do use heavier payloads in shorter lengths as noted). Happily, this gun will quite happily digest 2 ½” and 2 ¾” shells as well - like all 3" chambered guns.

With regard to bore diameter, both barrels are marked 15.8mm by the Italian Proof Authorities, which is about the norm for a 20 (most Italian guns are 15.8 or 15.9). There is nothing wrong with this, but I would note that there is much to recommend a slightly larger bore size – 16mm. Some makers are now 'back-boring even moreing' their 12 bore tubes by a few thou which can result in improved patterns and diminished felt recoil. The scheme can work just as well on a 20 (or a smaller bore - the greatest advantage is in a .410), but it does not seem to have become the fashion yet.

The barrels on the Guerini have solid joining ribs and a 6mm sighting rib with a traditional bead at muzzles. There is absolutely nothing wrong with this rib. It is excellent of its type, but I note Guerini also offer a solid rib on some models now which is always my preference provided there is no great weight penalty to pay. External finish of the barrels was competent, the blacking was good. Internally, they were nicely presented without rivels or distortion.

The action of the test gun is of typical modern Italian mid-market pattern combining split hinge pins with a low, Browning style bolt. This style is used by B.Rizzini, FAIR and others. Beretta and generic Perazzis combine bifurcated lumps with high bolts – allowing for the shallowest possible action design. But there is absolutely nothing wrong with style which is, nevertheless, shallower than the classic Browning design that incorporates under barrel lumps and a full width cross-pin. Coil springs power the tumblers. The single trigger mechanism is inertia operated. The safety is automatic and it is combined with a barrel selector. Trigger pulls on the test gun were fine. The shape and proportion of the gold plated trigger blade was good.

The unusual grey action of the Guerini is adorned with some quite pleasing game scenes (dog and rising woodcock on one side) as well as competent rose and scroll. The engraving appears to have been applied by a rolling process and is well done. The decoration is not over the top in any way and suits the gun well.

The Guerini’s semi-pistol grip stock shows some figure. It measures 14 5/8" from the middle of the trigger to the middle of the wooden butt-plate. The comb is well shaped and tapers nicely, but not excessively, to its front. Drop measurements are 1 3/8" at the front of the comb and 2 1/4" at heel (a little low). There is some slight cast for a right hander. The forend is of schnabel pattern and well proportioned. It falls into the hand comfortably, though the one disadvantage of the schnabel is that the hand is confined, more-or-less, to a central position. Chequering is well executed by laser in traditional panels and the simulated oil finish is pretty good.

I took the Guerini onto the excellent layouts at West London courtesy of George Juer and Roddy Richmond-Watson. These 20 Guerinis are fairly predictable. This one was no exception it shot very well. It was controllable, yet still lively and pointable – what more could you want? Recoil control was good too. The trigger pulls were ok. I think the gun is well conceived, well presented and offers good value for money. This one had a price tag of £1,840 (just under a hundred quid below the latest rrp).