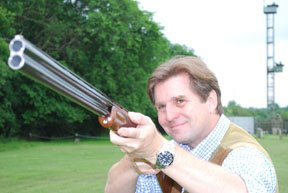 The test gun is a Guerini Maxum 32” over and under. It is an unusual beast – one of a pair of 32” Guerini Maxum 20 bores – that I have been using recently for my game shooting. Indeed, as I write this, I have just returned from a week of walked up and driven in Scotland.

The 32” Guerini under our microscope is what I would call a ‘modern’ 20 bore in that it is longer and heavier than a 20 bore used to be. The test gun hits the scales at around 7lbs. It feels quite hefty and the balance is distinctly muzzle forward, but, I have shot extremely well with this gun and it has taught me a great deal about my own game shooting.

Before considering this further, let me just say a few words on the aesthetics. I can hardly talk about first impressions – I have had the test gun for some time – but I am sure that you will agree from the pics that this is an especially attractive gun with its great wood and profusely engraved sideplates. In fact, I would go as far as to say that this is one of the best looking guns that I have ever seen at the price point. I am not alone in this opinion, friends in the gun trade like Bob Battaglia of Park Street Guns near St. Albans, and Chris Potter, tell me they have been selling like hot-cakes (the 30” barrelled 20 bore version being especially popular). It’s an awful lot of gun for 2 ½ grand these days. There is another version, the Essex model, which is equally appealing with tight rose and scroll engraving in Purdey style and with colour case hardening.

Another excellent feature of these guns is their semi-pistol grip stocks. I must declare an interest here, however. When Guerini UK – which Mike Mansfield and Kevin Gill run – first started, Mike and Kevin asked me to have a look at the Guerini stocks. They were essentially sound, but I thought the measurements could be tweaked – so the guns that come into the UK now have ‘shelf’ dimensions as specified by yours truly - 1 3/8” at comb, 2 1/8” at heel, length of pull 14 7/8” (with 1/8” extra at heel and 3/8”at toe), and a smidgen of right hand cast. I am biased, of course, but I think the combination of a great semi-pistol design with sensible British measurements has created something special.
Not only is the grip on the gun very nicely proportioned, but the radius is especially good – allowing one to stand on peg with muzzles well up without any discomfort (some tight full pistol designs can cause your wrist to ache if you maintain a safe, high, ready position for any length of time). The laser cut chequering provides excellent purchase too – consequently, the muzzle control is much better than average. A good grip really is important on any gun – it allows one to direct and control the muzzles with ease and, it is a significant factor in recoil too – the hands take much more of the recoil force than you might imagine. If the gun keeps slipping back through them it does you no good at all.

The test gun has a quite pronounced schnabel forend. This looks good, but does restrict the front hand position. Guerini UK are beginning to offer a Boss style forend on some models now – rounded and of constant width and depth – which is, frankly, my preference. That said, I am not changing anything on my gun – it works! The Guerini is also equipped with a nice push-button forend release catch which is much nicer than the sliding, mid-forend, type that some Italian guns have.

Looking at the rest of the gun, you will not find much that is especially innovative technically speaking – the really clever things about this gun are 1) the specification is spot on and 2) every possible use has been made of CNC to bring in a quality product at an extremely competitive price. The mechanics are familiar. It is a typical Gardonne action as also employed by various Rizzinis and others. There are stud pins at the knuckles and a modified Browning bolting system – a flat, wide, bolt emerges from the bottom of the breech face and locks into a slot bite beneath the bottom chamber mouth. The single trigger mechanism is recoil activated, there is a combined barrel selector and safety in the usual place on the top strap.

Everything seems extremely well made – amazingly so considering the comparatively reasonable price. Everything works well to boot. The trigger is an excellent shape and the pulls are good as well. The ejectors are well timed. My only grip concerns a slight harmonic, common to most stock bolted guns, that is noticeable on closing (most intriguingly, I noticed that this was absent on the specially hand-finished, but mechanically similar, guns that the firm has been making for William Evans in London).

The barrels on the test Guerini are monobloc, they are chambered for 3” (76mm) cartridges and bear Italian proof marks. The long, reasonably straight, tubes are fitted with multi-chokes (five supplied – cylinder, quarter, half, three-quarter and full) and 10mm sighting rib with narrow centre channel (finished off with an inoffensive white bead at the muzzles). The rib is vented, as are the side ribs, but Guerini UK tell me that from now on 30” guns as per my own preference will have solid sighting ribs (a much better bet in the field because they are less easily dented)

This is not only a visually attractive and well made gun, it shoots a storm as well! I have been using it exclusively this season, sometimes paired up with a twin as noted. It is longer and heavier than 20 bores of old. This seems to suit my shooting well. Many might see the 32” tubes and immediately think too much gun (and I would agree in the case of most 12s used for game shooting). But, the long barrels steady a 20. My advice for most people would be for 30” barrels on an over and under 20, but, I like very long guns.

Using this gun taught me something most interesting, moreover, I had been missing many game birds in front. This came as quite a revelation. Now, I just watch and shoot. I don’t need to do anything but watch the bird at normal ranges. The gun does the rest. I might finish by noting that I have also been experimenting with cartridges recently. I have now decided to stick with one load for 95% of my shooting – Lyalvale Express fibre 5s in 30 grams. I have found the larger pellets really do the biz. The relatively heavy payload is, surprisingly, quite comfortable to shoot (obviously, a bit of gun weight helps) and produces really clean kills with quarter and half choked fitted (my preference for a 20).

My thanks to Lyalvale Express for supplying the cartridges used in this test.