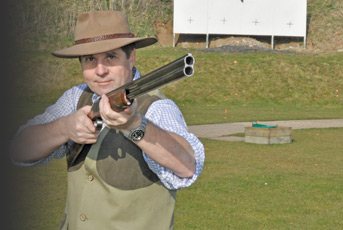 The test gun this month is the more upmarket of two round bar guns now offered by Guerini in the UK via Anglo Italian Arms and has an RRP of £3,855. First impressions are excellent. The gun has particularly attractive engraving, beautiful wood, an unusual semi-pistol grip, and generally, a very elegant form. As I write this, I am unpacking a not dissimilar 32” 20 bore Guerini having taken it north for my annual pilgrimage for the ‘wee grice’ (my gun is a square bar, side-plated, Maxum, which is equally attractive and functional).

Well, I have already given the game away. I am very fond of these 32” Guerini 20 bores (and must confess to having a small input into the original specification). They break the conventional rules of balance with their long barrels, but my goodness, do they shoot game birds well. I find the round bar guns a little faster handling (because they are a little lighter) than the side-plated square bar guns, but they all do the biz in fine style. I have not yet found anything (save perhaps the new Browning 725 30” sporter) with which I personally shoot game more efficiently.

Anyway, time to back track a bit and consider the test gun in detail. Bringing it to the shoulder, one is struck by a distinctly muzzle-heavy balance. This breaks the rules, but, oddly it feels fine. The gun feels steady but not unwieldy in any way. The barrels are not especially light for length and have an interesting, solid 9-7mm taper rib – one of my own favourite patterns. The open radius grip was interesting too. I very much like the tighter radiused semi-pistol grip that Guerini also offer, but I know this grip will have its fans as well – the radius similar to a Prince of Wales (but there is no cap). The forend gets my vote without any qualification, it is slim but rounded – elegant and ergonomically efficient.

Overall, the gun looks very attractive and feels solid too. It weighs in at about 6lbs 10oz. which would have been an ideal weight for a 28” 12 bore side by side once (actually it still is!). The round bar action is coin finished and very attractively engraved with a sort of open fleur de lys scheme combined with tighter scroll. The gun appears well made in all departments too, the quality of finish and wood to metal, and metal to metal fit are all excellent

The Guerini’s barrels are, of course, monobloc. The joins are very neat between monobloc and barrel tubes (the firm have significantly improved this aspect of manufacture in recent years) and concealed with a little engraving as is the norm. The gun bears Italian proof marks and is chambered for 3” (76mm) shells. I never use 3” cartridges, but it is a sign that the manufacturers have confidence in their gun that it is chambered and proved as such.

The presentation of the barrels is especially good cosmetically, as for their boring, I can only note that I have had great results from my 20 bore Guerinis. I usually choke them half and three-quarters. I typically feed them a diet of 30 and 32 gram No. 5 Lyalvale Express cartridges. Some question the payload, “Why put a 12 bore load through a 20?”, I can only say that recoil is not excessive (or indeed noticeable in the field) and the terminal effects are most encouraging! The 20 bore has a weight advantage, and, in a game gun, allows for long barrels in a machine made gun without an excessive weight penalty.

The barrels have solid joining ribs as suits a game gun and the solid taper rib as noted. It is a far more practical design for a field gun than a narrow, ventilated, type which is so much more vulnerable to denting. This rib presents a good picture to the eye, too. It has a well finished top surface and is perfectly true. There is a plain metal bead set about 10mm back from muzzles. It is not too small and compliments the rib well.

The barrel blacking has a deep lustre (it is odd how some manufacturers manage to crack the secret of this, Browning, in their mass made range, have fabulous blacking too, and like Guerini, it seems very durable). The sprung ejector work was nicely assembled and the jewelling on the sides of the monobloc looks good. Looking at the barrels carefully in natural light threw up no unpleasant surprises either such as bent tubes or rivelling. Generally, they impressed. The bores are chromed too which I think is a benefit on a working gun. The muzzles are subtly tromboned at the muzzles to accept multi-chokes and 5 are supplied.

The Guerini’s action has the usual split hinge pin arrangement with trunnion studs mounted in the action walls locating in the bifurcated lumps of the monobloc. Coil springs are used to power the hammers in the action. It is a common plan. But what is interesting is the action has been redesigned so that it is a true round bar (early guns of this pattern coming from Gardonne where just filed down square bars – in the age of CNC no such accommodations need to be made). The single trigger operates on the recoil principal, and a barrel selector is combined with the safety in the usual manner. Both safety and selector were of a good size and positive in action. The shape of the bright polished trigger blade complimented the rest of this elegant gun.

The locking system on the Guerini, like other guns in the range, involves a full width bolt coming out of the bottom of the action face on Browning style and engaging bites beneath the bottom chamber mouth. It is a well proven system. The only potential disadvantage (mitigated to some degree by combining this arrangement with a split hinge pin) is that by placing the bolt and bites beneath the bottom chamber mouth the gun is made a little deeper in profile than might otherwise be the case. In a 20 though this is of little consequence - it may even be a positive as it allows for good grip depth.

The stock on the test gun is made from walnut with straight-ish grain but some character. It measures 14 3/4” from the middle of the trigger to the middle of the wooden butt sole. I considered the unusual grip shapes. The comb on the Guerini is quite slim, but there is good taper and shape to it. Drop measurements were quite fine, a 1 3/8” at the front of the comb and just over 2 1/8” at the rear. Chequering was very neatly executed (probably by laser) and the oil finish on the gun was better than many with well filled grain and a good sheen.

This is a very interesting dilemma, because I really can’t explain why these 32” Guerini 20 bores seem to shoot game so well – but they do. They are certainly pointable. They handle instinctively and, with their front heavy balance, seem to carry one though the bird well without the need to see much conscious lead – something I often note on long barrelled guns (with which I usually need to see more of a gap). I’m not going to BS though, I really cannot pin down just why they seem a relatively easy gun with which to shoot game. They work. They’re pretty. They’re well priced. What more do you want?