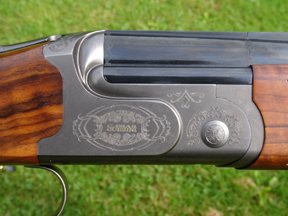 Caesar Guerini are a relatively new Italian maker but their guns have quickly gained a good reputation for both style and value. The guns are imported into Britain by Guerini UK, a firm which is a partnership between businessman and keen shot Mike Mansfield and trap ace Kevin Gill.

Kevin has put a lot of his expertise into this exciting new range. I might mention, meantime, that I remember seeing Guerinis appear in the US shooting press a few years back and they made quite a splash because there products tend to be eye-catching and especially well finished. They have proved popular in the UK too, with a lot of dealer interest.

All of which brings us to our test gun. It is a 30” Summit clay gun, and it has a RRP of £1,595. Side-plated deluxe guns such as the Essex - the sort of gun that has helped to build the Guerini name up so quickly - begin somewhere just over the £2,000 mark.

The Summit may not have the bells and whistles, but it is an attractive gun nevertheless. First impressions are of a well styled gun clearly intended for serious clay busters. The specification includes a single-selective trigger, vented rib and no less than 8 extended chokes. The whole lot comes packed in a smart, lockable, ABS travel case.

Our test Summit has a smart grey action, although colour case hardening is an option and one I would probably opt for myself. In either case, engraving is minimal. It is just the sort of simple decoration that appeals to me on a working gun - not flash, but pleasing to the eye and practical all the same. The action of the Summit is not especially innovative in any respect (other than in the computer controlled manufacturing methods used to produce it) but it is well made and neatly engineered. As my other test gun this month, the Bettinsoli (a gun pitched at another market), the Guerini employs an action that owes something to both Browning and Woodward in its parentage.

It employs the now very popular Woodward style split hinge pin as also adopted (and popularised) by Beretta and so many others (including a dozen or more makers in Italy). Lock up is achieved by a Browning Superposed style flat bolt, that comes out of a slot in the bottom of the action wall and mates with a wide bite machined into the lump beneath the bottom chamber mouth. It is a very well proven arrangement and is combined with a recoil activated, inertia-bloc, single trigger mechanism that worked without a hitch during my extensive test.

Let’s move on to the barrels. The 30”, 2 ¾“ (70mm) chambered monobloc barrels on the Summit were well presented and had been subjected to Italian proof in Gardonne. (Readers may also be interested to hear that there are both 32” and 34” barrel options on the Summit - we will be bringing you a test on the Long Tom version soon). Bore dimensions were 18.4mm and 18.4mm, but all guns will soon be back-bored with 18.7mm as the standard dimension. This is excellent news. I am convinced that more opened bored guns shoot well and reduce felt recoil significantly. The vented 10mm parallel sighting rib was well machined and had a shallow centre channel.

It was notable, moreover, that the barrels, had full length joining ribs; I am not especially fond of the modern habit of removing the ribs under the forend as a weight saving measure - I think it can disrupt handling qualities. The extended chokes look business like too, Mike Mansfield of Guerini UK tells me, however, that the 8 tubes provided with the test gun, may now be replaced - on new guns - with 5 flush fitting Teague chokes at the customer’s discretion. This creates a slight dilemma for me - you can’t get better than Nigel’s chokes, but my practical preference is for extended chokes because they are easier to remove for cleaning. All things considered, I think I would have to go with the Teague option, though.

I liked the stock on the Summit as well. The wood was of good quality and the stock design - like the rest of the gun - was very well considered. There was a good full, but not too full, comb as suits a clay gun and the pistol grip was excellent as well. It filled the hand well and offered good purchase. I hate grips that narrow to their front - sometimes a consequence of top and bottom tang being too close - this one had the relatively even depth that I always prefer (and allows one to hold on to the gun most effectively).

The Stock length was about 14 5/8” with thin 'rubber' recoil pad fitted. Measurements for drop were 1 3/8” and 2 1/8” (just about ideal for a mass made over and under). There was an extra 1/8” at heel and 3/8” at toe - the modern standard (though I feel that ¼ and ¼ might be even better - but I am quibbling, these dimensions are quite acceptable. Wood to metal fit and stock finish were competent. The cut chequering was well done and provided good purchase too. The Schnabel forend was of classic pattern with an Anson button fastener at its tip (much better than the sliding latch employed in some cheaper Italian guns).

The Summit shot very well. It was predictable and forgiving in use - two very important qualities in a clay gun. With quarter and half choke fitted I whacked just about everything Braintree Shooting Ground had to offer. I tried the Summit on several layouts and the towers in the company of Kevin Gill (who had come down for the day) and nothing defeated me. Felt recoil was good. Trigger pulls were good too. Balance was neutral as many prefer in a clay busting tool. The gun scored in all departments. I came away impressed with this well sorted shotgun and thought that it offered value at an RRP of just over fifteen hundred quid. What Guerini have proven with guns like this Summit is that they may now be considered a major player.