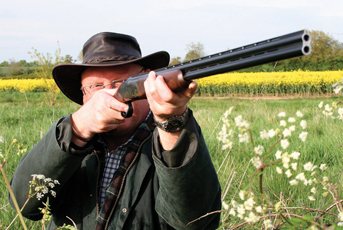 This compact Huglu has lovely lines and is a perfectly scaled down over and under shotgun suited to shoot the .410 (36 gauge) cartridge. The action is machined from a solid steel block and conforms to the layout of a box lock type but in this case with the addition of side plates. These instantly transform the look of the little Huglu, especially as these and the whole action, back strap and trigger guard are all colour case hardened.

This traditional finish to me is so much nicer than polished steel or chrome, as it instantly gives that warm ‘old world’ look and feel. Colouring is very even and well distributed and is accented by simple scroll work.

The lock up is strong, with the barrel lumps traversing the action floor, looking nice and giving that all important extra surface area for security. The action sides are also a good thickness to cope with the high pressures exerted by the .410 round and there are also twin gas raceways to the action face to vent off any gases if a primer goes pop - nice idea.

The 28 inch barrels are finished in an exterior black chrome that’s smart and practical and actually contrasts the case hardening well. Internally the finish is plated hard chrome for longevity with 3 inch chambers. They are magnum proofed too, so safe with all ammo available.

The top rib is a simple 8mm flat and file cut with single Gold bead that gives an instant eye leading non reflective look at your quarry. Both top and joining ribs are ventilated, so if you get a bit enthusiastic with the rate of fire it dissipates the heat.

The barrels are marked as being choked ‘Full’ top and ‘Modified’ bottom but they are very tight more like “really” full and ¾ quarters in tests, which wasn`t a bad thing. This is a non ejector gun and actually it opens wide enough to give very good access to the spent cases for removal.

There is a single trigger that operates a non-recoil operated inner cocking mechanism, which is just as well as the Hugli is a pussy cat recoil wise. You can select either barrel using the selector on top of the safety bar. A small latch is flicked right for the bottom (modified barrel) or left for top (full choke barrel).

The safety is automatic and moves down when the action is cocked and is then thumbed forward when you want to shoot.

Best part of this petite gun is the lovely stock. Typically sporter trim, the 9 inch long forend has a semi Schnabel tip with wrap around cut chequering with a finishing touch of the barrel catch also being colour case hardened.

The butt section too is beautifully proportioned with a 14.75 inch length of pull with the butt pad having the typical plastic tip top and then soft rubber lower section for mounting ease and then security/grip in the shoulder.

The quality of walnut is superb for what is essentially a “budget” gun, mind you the Turks probably now have the best source of walnut in the world.

The grain is vivid and strong with lovely deep colour and all finished in a rubbed oil finish that makes the case hardening next to it glow with warmth and it’s also very practical on a hedgerow gun that might get scuffed from time to time.

I had a mix of .410 ammo on hand so put the Huglu through its paces over the chronograph, test pattern sheets at 25 yards and most importantly out in the woods where it really counts.

First up were the Remington 3 inch No 6 11/16 oz load that shot very consistently at 1180 fps velocity over the Chrony F1 and patterned with the bottom barrel an even pattern with slight left hand bias. There were 54 pellets within the 15 inch inner circle.

Game Bore`s 2 ½ inch No 6 3/8 oz load snotted along at 1289 fps velocity with 52 pellets slightly biased low on the pattern plates.

A nearly subsonic load came from Lyalvale 2 ½ inch No 6 14 gram loadings with an average of 1087 fps velocity just nudging the sound barrier on the test day but some shots were definitely subsonic at 1047 fps. Patterning was actually dense with 62 pellets within the inner kill zone.

The heavy hitting Game Bore 3 inch No 6 16 gram load gave very healthy velocities at 1277 fps with pattern plates revealing tight dense patterns from the top barrel. There were slightly low but had 79 pellets in the 15 inch inner circle.

Last but not least were the light shooting Eley 2 ½ inch No 6 12.5 gram cartridges; they gave subsonic velocities averaging 1007 fps with 50 pellets clumped centrally.

I took the trim Huglu out on many a trip round the woods and accounted for some cracking pigeons coming into roost, plus a big old crow and rabbits on route back to the truck. It’s so light and handy and is fast to get into action you often have to slow your swing a little but so long as the ranges are kept sensible, rabbit, squirrels, pigeons, ferals and crows will all agree that the little Huglu .410 shoots very well. The tighter chokes pattern the shot better for a bit more range and the denser pellet count helps bring birds down cleanly.

This Huglu had me beaming with smiles as it’s just great fun to shoot, and it shoots so well, it even makes a rifleman like me look half reasonable with a shotgun!

Ladies and kids will adore the proportions, although a tad long, and the non-ejector status teaches good gun handling. The tight bores give very nice even patterns and good velocity, making it a capable gun in the field and while you are waiting for the pigeon to roost you can admire the Huglu’s nice case hardened action.

It’s a lovely gun and you get a lot for your £695 investment. The trouble is, if you buy it for your wife or kids, they’ll have to fight you to get it back! GM