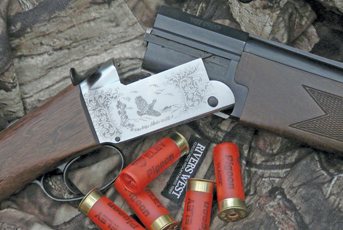 Quite a few years ago, if you wanted a budget priced 12-bore for junior to start out with or a true working shotgun that would tolerate untold abuse, there was only one to go for - namely an Investarm. But as trends and technology have moved on allowing manufacturers to produce relatively sophisticated shotguns at serious sub-£1,000 prices, the Investarm brand disappeared from the UK market. However, now these unarguably basic Italian smoothbores have suddenly reappeared, the reason being that since Investarm is produced by Salvinelli - makers of some top end shotguns - they’ve now become part and parcel of the Range Right portfolio.

The one thing you’ll never accuse an Investarm of is being over complicated. Even after years of production these shotguns are still based around the folding design which made them so popular in the first place. Granted you now get walnut furniture, the game stock complete with plastic buttplate and tulip forend nicely grained and oil finished, whilst there’s actually small panels of straightforward checkering. Nothing to write home about, and pieces of timber you won’t be overly bother about if you scratch or dent, but never the less it’s not bad.

Next the 28” monobloc barrels that swage into hexagonal style 3” chambers, the huge single lump welded to the bottom chamber. They are well blacked with a solid mid-rib and a vented 7mm top-rib with a sizable muffin shaped brass bead sight. The top-rib is unusual in that it steps up six or so inches in from the action.

When you look at the chambers, don’t try to find the ejectors - since there aren’t any. Instead a rudimentary lifter pulls the spent cases forwards although as I discovered you’ll probably have to use the head rim of the next live round to flick them out. Inconvenient I’ll agree, since the empties aren’t lifted very far but you’ll soon get into the swing of it.

Now for the unusual bit, unusual if you’ve never shot with an Investarm. The slab side polished steel action is most definitely square section although it has been seen fit to cover all the surfaces with basic games scenes incorporating snipe, partridge along with panels of scroll work. Based around a traditional, mechanical boxlock the first noticeable aspect is that to attach the barrels to the action you’ll need to push the top-lever as far round to the right as it’ll go, even if this means pushing it with the ball of your thumb. Reason being the 200LM doesn’t have a conventional cocking lever, opening the gun being exactly that, since the only functions of the forend are to give you something to hold and keep the gun together.

By locating the hook at the rear of the large single lump across the hinge bar, swing the barrel upwards and let them lock into battery before clipping the forend into place. From there, every time you open the 200LM you have to push the top-lever all the way round till it’s more or less at ninety degrees to the rest of the gun. Confirmation that you’ve pushed the lever far enough and the gun is cocked is best determined by the click the mechanism makes as the lockwork reengages and the sears set. If not, push a little harder and you’ll actually feel the gun cock.

The safety is automatic, which means when you open the gun it engages by itself, it does this just prior to the final push on the top-lever although you also have to remember that there are no barrel order selectors, the ¼ choke bottom barrel always discharging first, the ¾ top barrel second.

Fully assembled the 200LM measures 44¾” with a total weight of 7lbs 10oz. A slight weight forward attitude is caused by the balance point being about two inches in front of the hinges. Dimensionally the stock gives the shooter a drop at comb and heel of 11 5/32” and 2 3/32” with a rather short 14 1/8” length of pull. The broad, black anodized trigger gives a 4lbs 8oz release once you’ve overcome the small amount of creep.

Although the initial impression is that the 200LM will be a flat shooter, a moment or two with the Arrow Laser Shot revealed that the stepped rib disguises the fact the gun shoots low to point of aim, something you will have to compensate for. Initially shooting fifty sporting birds and loaded up with 28 gram Eley VIP Sporting fibrewads, I discovered that the 200LM might be an over-under but it actually shoots more akin to a side-by-side; by which I mean you have to blot out the clay before firing. Once you’ve adjusted to this physicality, the 200LM whilst never being the most refined gun you’ll ever shoot, doesn’t do to bad a job although clay shooting will never be this gun’s forte or indeed its intended purpose.

Switching to 30gram Eley Pigeon and lying in wait for a few late evening crows, as a snap shot shooter the 200LM is far more suited. With the weight forward, the gun is most definitely directed by the leading hand whilst the lack of stock length is compensated by the fact that a thicker jacket added those few vital fractions of an inch. Similarly, incoming targets don’t need the shooter to adjust their sight picture although you must take care to allow for the fact that the chokes are tight to designation. Apart from that the 200LM is, as a friend of mine used to say, ‘is what it is’, a basic no hint of any frills 12-bore that - once you are used to it - shoots as well as expected, maybe slightly better.

If the £445 price tag of the 200LM seems a bit steep or you’d prefer a 20g or 410 then the fully folding 100LM can be yours for £395. Apart from the price, additional gauge options and the fact the barrels fold all the way round, aesthetically there’s no difference between the two.

Once you’ve got used to the gun’s slight weight forward characteristic and the fact it will initially shoot low until you’ve acquainted yourself with the correct sight picture, the 200LM should serve you well. As a vermin gun, a basic rough shooting tool, something to keep in the back of the 4x4 on shoot maintenance days or a starter for someone who has yet to be convinced shooting is for them, you probably won’t go far wrong with the 200LM. And whilst this Investarm will probably never become your favourite 12-bore, there’s every chance it’ll become one of your most trusted, do anything guns, the sheer minimalism of every part of it ensuring it’s almost incapable of ever letting you down.

One thing the gun will teach are the basics of safe gun handling, since this Investarm is so inherently slow to use, the sheer lack of refinement meaning the operation is a genuine back to basics affair which there’s nothing whatsoever wrong with for someone starting out.

What you won’t be able to criticise is the 200LM’s strength of build, it’s as tough as old boots and probably about as sophisticated. But ask yourself this, where else other than Investarm and their 200LM will you buy a brand new Italian built shotgun for under £500? The answer is you won’t. GM