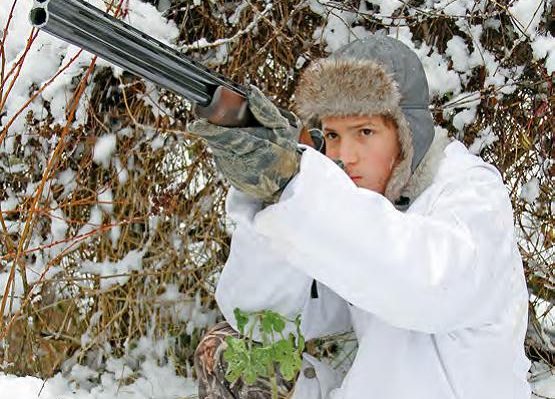 As the Marocchi appeared out of the packaging, I felt right at home, because I had owned a 512 AKA Finn Classic Tikka, made by Marocchi for many a year. That was a double rifle and shotgun and was the only real shotgun I could shoot before I sold it, doh.

This Marocchi is just as good and it was nice to get a friend back in my hands again, I could word that better! Marocchi is a really nice family run business that has been going since 1922, since its founder, Stefano Marocchi, started the company in the Brescia region of Italy, well-known for gun making.

Today, it is distributed by Viking Arms Ltd, who carry the whole Marocchi range and once again offer this really nice shotgun to the British market place.

The Marocchi First E (the E is for ejector, non-ejectors are available) is an over-andunder shotgun, designed to be a fast handling and very light weight shotgun, without compromising on quality. It is aimed at the first gun shooter but equally will find favour with seasoned shooters too, who want a lighter gun.

For a selective game shooter, beginner or smaller framed shooter, the First is ideal and has that typical Italian flair and build quality to suit a discerning shooter. A nice fact is the availability of this gun as a 12g, 20g, 28g or 410g guise, which gives you a lot of diversity to game, frame of shooter and style that this Marocchi First can suit.

The action is a typical monobloc design, with quite a deep girth of 70mm and width of 40mm, which is counter-acted by the lightweight construction from a one-piece, 7075/T6 aluminium block. This very well engineered and machined with few over runs and marks. All stressed areas have steel inserts, such as the captive hinge pivots and sliding locking bar.

The action finish is a nice nickel brushed look, with adornments of patterned chequering and laser cut game figures. The Diamond cut pattern edges the top action rim and small cartouche on the base, where the First E logo is inset in a banner scribe. Less appealing, are the laser cut pheasant and partridges to the left and right action faces. They just look a bit cheap and the action to me would be better plain, purely my opinion though.

A nice contrast are the blued top lever and trigger guard, along with the safety catch itself. The top strap lever is also smooth and holds open on opening the action and the barrels drop easily without any slack. The safety is a non-automatic version that I prefer, so you do not forget to slide it off at the crucial moment. But it is a bit small, with a low profiled safety switch. Left position is shoot the over/top barrel and to the right shoots the under/bottom barrel. The trigger guard is blued as stated and has a conventional profile that I like. The trigger too is good, is blued steel and smooth that suits this gun and the trigger pull is precise at 4.5lbs, no creep. It’s not an inertia system, so does not need the recoil from the first round to set the sears and again I like this mechanical cocking mechanism.

This box lock design and the monobloc barrel construction is good and chunky, affording a positive lock-up and re-assured longevity to the Marocchi. The lumps are really nicely jewelled to their surfaces that show as you open the gun to load or eject. Talking of which, those ejectors are excellent, incredibly forceful and take no prisoners and well timed too, if both shots are taken.

I had the 30-inch barrels. These are beautifully made and is where Marocchi win in my view. Attention to details where it matters but does not usually show, this is a marque of a good gun maker. They are very well finished inside and out. Internally, the bores are incredibly smooth and have 3-inch chambering with relatively short forcing cones. The chokes, five of them are all flush fitting and well threaded to the barrel, i.e. concentric.

The barrels are soldered together with a solid mid rib and a ventilated top rib of 7mm width and 12 evenly proportioned vents. The top surface is serrated to reduce glare and sighting is via a single gold bead. I like this, simple is often best, as twin beads, dayglow etc. can be too much information to me.

Best of all has to be the blued finish, wow! Some of the best bluing I have seen on a shotgun and especially at this price. It has a very deep lustre, with even blue blacking that was actually very tough finish.

Again, seemingly normal but actually the stock is a very ergonomic and natural feeling design that gets that gun in the shoulder fast.

Firstly, the choice of walnut on a reasonably priced shotgun is superb. A good stock sells a gun and this Marocchi is spot on. The walnut used is really well-figured and coloured and has a lovely tiger strip, or fiddle back, figuring to it. The oil finish is both practical and smells lovely! There is minimal cast and the drop at the comb standard but the 14 .75-inch length of pull and lightning fast handling really gets that stock up in the shoulder and has your eye looking straight down that rib. Just with that feature you are there when handling a shotgun.

During the test, despite being a light weight 12g, the Marocchi was very pleasant to shoot, that’s good stock design.

The chequering is laser cut, as with the frame adornments, and although the way of things these days looks good but is a bit shallow in truth. The forend I like, as it is slim, long and has a good tulip or semi Schnabel forend lip, to stop that leading hold slipping forward.

Bottom barrel with the ½ choke was chosen and the pattern boards were set up at 30-yards.

This is a cracking load and I was using the plastic wadded version for a tighter pattern with a good 29-grams of No 6 shot.

This is a fast, hardhitting load and I had a total of 227 pellets on the boards. Very slight right bias but good density; pattern distributed 71 inner hits and 156 outer sector hits.

A great all rounder as usual that would suit as a ‘one load does everything’ shell.

A very nice game load this one. It has a high, 16mm rim with a fibre wad and formulated powder to deliver consistent power and patterns. I had the 28-gram load, with No. 6 shot. At 30-yards, a total of 212 pellet strikes, this Marocchi First E shoots tight patterns on ½ choke, which I like. Again, a very good, evenly spread shot pattern. The outer 30-inches held 125 pellets and the inner 15-inches had a good, dense 87 strikes.

I cannot fault this load, great game load; your choice is purely down to brand loyalty.

A classic, high-performance game load. I had the fibre wadded, load with 28-grams of No. 6 shot. This shot surprisingly softly in the Marocchi and gave an overall shot count of 220 No. 6 pellets, very healthy. Good density and even too, with the inner 15-inch sector accounting for 78 pellets, 142 outer.

Nice game load that hits hard and shoots soft and patterns very well, even being a fibre wad load.

This new load has been causing quite a stir in shooting circles, as this offers great patterns down range and extended ranges too. This plastic wadded copper pellet load of No. 6 shot and 28-gram payload really shot well. I had an overall of 192 pellets on target, with 59 inner pellet hits and 133 outer sector strikes. Really good, even distribution of the pellets on the board, with mild recoil despite the hard-hitting load, a real winner on the game fields.

It’s one of those shotguns that you look at and go “Okay, seen that before”, but when you pick it up, all those little Marocchi features come together in perfect synergy and combine for a better handling shotgun.

Sure, a couple of features, purely aesthetics, are not to my liking but this First E is a great shooting and well-priced gun that will serve its owner for years to come and throws really good patterns to boot. The more I shot this Marocchi the more I liked it, many people tend to go for the normal named shotguns but give the other shotguns a chance and you might just bag yourselves a bargain and a really great shotgun in the process.