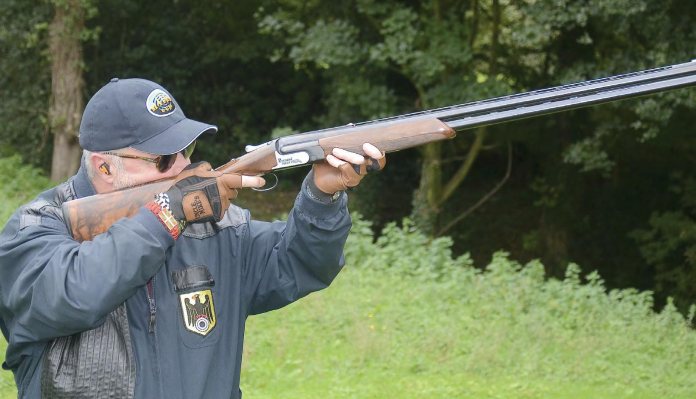 When it comes to gathering trophies and titles, Perazzi can lay claim to most of them, the various Trap disciplines especially the Olympic ones Perazzi’s happy hunting ground. And whilst the majority of Perazzi shooters tend to err towards Trap, some of them also wield their Italian award winning 12- bore at a few sporting targets now and again. And I say this from experience, an MX2008 I used to shoot with was adept at both. All that was needed was for the adjustable comb to be dropped ever so slightly.

But in the case of the new High Tech S, this Perazzi has been designed and built as a sporter, although close inspection reveals there’s still more than a hint of trap about it. It’s also worth noting that like all Perazzi shotguns, the new High Tech S, from herein referred to as the HTS, can be built to each individual shooter’s exact specifications, the one seen here a ‘standard’ HTS, or as standard as any Perazzi ever gets. The downside is you’ll have to head over to Italy to be measured up and agree the style changes but I’m sure it’s a hardship most of us would be more than prepared to endure!

Like all Perazzi, the HTS arrives in a fully fitted travelling case. But unlike other Perazzi, all you get besides the shotgun is a long stock bolt key. The reason for this will become clear a little later on, but the HTS isn’t as adjustable as some of the others, so you don’t require as many additional bits and pieces, simple as that.

The first aspect of the HTS that hits you between the eyes is the glossy lacquered walnut, the furniture radically different from the usual near black, oiled walnut of Perazzi competition shotguns. Finished off with a soft, slim recoil pad and the gun’s name stamped just above the heel, the sporter stock features a scallop along the lower edge that repeats along the bottom of the noticeably open grip, the profile and angle of which is more akin to that of a trap gun than a sporter. Complete with two distinctly shaped panels of chequering, the overall size and contours of the grip tends to cock the shooter’s hand upwards, a physicality many will probably choose to address when buying a HTS.

Moving forward, whilst any style of forend is available, the HTS features a design that is unique to the model. Locked into place with an Anson latch just above another name tag embossing, the nicely considered rounded, hand filling shape, chequering that covers most of the surface and a rounded and extended lower lip, this new forend is one of the best I’ve had the pleasure of seeing and holding in many a long while. Simple, elegant and wellconceived; my congratulations go to Perazzi for coming up with this new forend style.

In profile and basic looks, the Boss-style inertia action is exactly what we’ve all come to expect from Perazzi’s take on this classic design. Difference is the HTS action is 3mm wider, which has altered this 12-bore’s balance point. The familiar side panels are still there, although raised cheeks are now silver satin finished with the HTS name engraved into them, the black and silver finish a more modern look in comparison to some of Perazzi’s other shotguns.

A broad black trigger guard protects the non-adjustable silver trigger-blade, whilst the contrasting effect continues on the top-tang, the fractionally longer than usual top-lever brushed silver satin with a large ‘P’ sat atop the spindle, the broad barrel selecting manual safety located just behind. Feeding into the action in this instance, and for ease of reckoning, are 32- inch monobloc barrels, the semi-gloss tubes swaging into 3-inch chambers. Please note, Perazzi produce their barrels in metric lengths, so the tubes were actually just shy of the indicated length in inches, so for the purist they were 31-inches and a good bit. Joined together with a narrow slot vented mid-rib and crowned with a reverse tapering 9mm-7mm low stanchion vented top-rib, a positively huge extended white bead sits just above the Full and ¾ fixed choked muzzles.

Overall, the looks of the HTS are for Perazzi somewhat unusual and for the diehards take some getting used to, the black with gold inlaid MX series considered this Italian maker’s hallmark styling. But things move on and there’s actually nothing to say your personal HTS has to look like the one on test. Anything is possible with a Perazzi, don’t forget.

Irrespective of how the new HTS might look, the moment you hold and heft the HTS you know you’re holding a Perazzi.

Any shotgun that carries this legendary maker’s name has a distinct, unique feel, something that applies to all top makes and models. Overall length was 9lbs 4oz, the barrels as above with length and weight of pull being 151/16-inches and 5lbs 8oz. With a balance point about ½-inch forward of the hinges, the HTS is more or less neutral in balance as it gets, the weight evenly distributed between both of the shooter’s hands, which when incorporated into the gun’s total design and the unique forend, produces a 12g that is capable of engaging any and all targets.

So, since as is now my habit, the HTS was test fired within the confines of Malmo Gun’s private layout and loaded up with Cheddite ammo, in this instance 28g Trap Oro filled with 7s, these cartridges as good as it gets, buts that’s only my opinion! Initial mounting indicated that the basic HTS would shoot marginally high for me but a trait that was easily rectified by a minor alteration of my mount. Mated to the tight chokes and the Trap Oro shells, the smoothness of the Perazzi’s ability to maintain a controlled, unhurried swing and the staggeringly fast Trap Oro meant I had to cut down the amount of lead required by at least half, adopt a more relaxed, almost slow motion style and almost caress the trigger, the speed of Perazzi’s inertia system and trigger sensitivity still very much in evidence in this new model. The end result, the clays didn’t so much break, they vaporised!

Was there a downside? Yes, and it’s something that, in my opinion, Perazzi need to address for customers who might be looking to purchase an off-theshelf HTS. The aforementioned grip places the shooter’s hand in the ‘trap’ position, ideal for DTL, etc. but not overly conducive to sporting targets. Besides the shooter’s rear hand having to adopt a more ‘cocked’ position, it has the negative effect of reducing the shooter’s ability to move the gun as quickly as they might like. Apart from this easily negated physicality, the HTS shoots, moves, handles and reacts like only a Perazzi can. There’s just something about these performance Italian shotguns that sets them apart, the term the ‘Formula 1 of shotguns’ far from an exaggeration.

Like all Perazzi, the HTS ain’t cheap; the basic model seen here relieving you of £10,000. Where the difference or list of options comes into their own is in how your own HTS will actually look, feel and shoot. Basically, take all weights and measured of the test gun as a guide. Everything is changeable, the finish of the woodwork, forend style, model names embossed into the stock and forend can be deleted, barrel lengths and chokes made to those you’d prefer. In fact, your HTS might end up looking nothing at all like the shotgun seen here.

Granted, all the options cost money and need to be added to the initial price, UK importer’s RUAG more than happy to assist in helping you design and customise your own personal High Tech S. And while the additional investment, potential trip to Italy and other sundries might seem a little over the top, if you’re injecting a fivefigure sum into your shotgun and shooting as a whole, if there’s one thing I guarantee, when a Perazzi fits you, it’ll fit you like no other 12-bore. The new High Tech S represents a notable advancement in Perazzi’s technology and design, a new shotgun from one of the best that you should be more than able to capitalise on.

With thanks to Malmo Guns for making their private clay shoot available and for supplying the Cheddite Trap Oro ammunition.