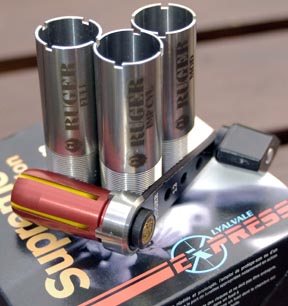 Highly respected here in the UK for their .22 rifles, Sturm Ruger & Co have been offering their home market a range of Red and Gold Label ‘Field’ and ‘Premier’ Grade shotguns for years. But where the USA market users have always embraced all the various calibres from 12-bore down to .410, European and especially UK shotgunners have always shied away from Ruger smoothbores, regarding them as rather plain in appearance, old in manufacturing procedure, and lacking in refinements.

What this boils down to is that the English in particular look for aesthetics where the Americans look for solidity and longevity. You only need to look along the racks of any American gun shop to see that although Ruger do produce shotguns with elaborate and attractive engraving; practical is still the byword.

Believed to be the only O/U shotguns still manufactured in the United States, all Ruger’s shotguns produce their receivers by investment casting. As opposed to machining a solid billet of metal, in the more accepted manner. Old fashioned though it maybe, don’t let put you off since this Red label, is a tough as old boots.

Often referred to as the ‘engineers’ gun’ due to the quality of old fashioned workmanship, many people mistakenly regard them as assisted openers. Whilst pushing the top lever over does tend to generate this sensation, the truth is that the barrel tubes and chambers are sweated into the action. This produces a quality of fit around the trunions to a degree that the barrels naturally fall gently forward when the gun is opened.

What set the All-Weather apart is the satin grey finish coupled with black, synthetic furniture. Designed to withstand absolutely everything the elements can throw at it, this Red Label sets itself apart in both looks and usage. To say its different is an understatement but not to a degree it looks out of place.

Concentrating on the barrels, as soon as you hold them you realise the difference in these 28” stainless steel tubes. Matte grey in colour, the smooth satin finish repels anything, whilst seriously reducing any potential heat shimmer. In turn, these are topped off with a squat, bright brass bead that sits 3/8” back from the Brierley multi – choke muzzles, that come with that most American combination of Full, Modified, Improved Cylinder and two Skeet.

The cross cut 8mm top rib is unusual insomuch as it dovetails into a separate section that runs along the top of the upper chamber. It would appear that the rib is either replaceable or adjustable should you so wish. Similarly, the solid mid rib runs backwards from the 1” long joint to just behind the front of the Schnable forend and is held in place by a riveted wedge. This arrangement is there to allow you, should you wish, to remove it - either to increase heat dissipation or for aesthetics.

Ruger like many American brands employs the back or over bore system for their barrels between the rear forcing cones and the start of the muzzle restrictions. What is unusual is that to accommodate the Brierley chokes, the exterior of both the barrels appears to flare for the last 8½” of their length. This is just additional metal, as the widening of the tubes has no bearing on the internal bore.

Moving back to the chambers, the familiar long kickers are gradually curved so as to allow the forend to slide round and over them whilst locating the skeletal cocking levers. Hooking the cams around the action’s trunions, the ejectors are once again of the UK or European style. This was instigated by UK importers Viking Arms, as all Ruger shotguns had the habit of their ejectors overriding the cartridge head due to the fact that American shells have a deeper, fatter head than their continental counterparts.

For any Ruger shotgun owner the style of the All-Weather’s action will look remarkably familiar, apart from the satin grey finish. Neater in appearance than its 20-bore sibling, the trademark fences roll on from the chamber’s top rib, sweeping across the top strap and then forwards along the top of the action wall. Apart from these moustaches the only artwork is the Sturm Ruger legend on the base plate, plus the two eagle logos on the forend and grip cap.

The crisp and predictable non–adjustable trigger sits inside the usual ovoid guard complete with the ever present wrought iron style curl adornment to the rear. The short-throw top lever shows slots on its lobe to give a bit more thumb purchase in operation. The Ruger uses a combined safety catch/barrel selector; the latter function requires the catch to be pivoted. Sometimes when you go from SAFE to FIRE it’s possible to operate it unknowingly, so selecting a different barrel from the one you thought you had. Whilst you eventually get into the habit of checking it as you disengage the safety it does become irritating over an extended period.

Internally, the neat recesses to each side of the action face line up with the bites either side of the bottom barrel, the whole action firmly locked together using a bifurcated lump. Closure of the Ruger generates the usual metallic clunk so beloved of marque enthusiasts. Close inspection of the action also reveals Ruger are still basing their actions around a modified locking system developed by Boss, the internal trunions recessed so as to allow the barrels to pivot.

The barrels position courtesy of a U-shaped, self-adjusting block that connects with the top of the monoblock extension. By turning the gun over, you’ll then see the small lump that, when the gun is closed, locates flush with the bottom of the action. This is still regarded as one of the most secure and reliable systems on the market, something you can virtually feel as you close the gun.

All that remains is the synthetic furniture. Matte black in colour and with comfortable, well defined moulded-in chequering, the fit as you expect from a manmade composite is as good as it’s ever likely to get. To my mind synthetics never seem to flow easily into a shotgun’s frame, as opposed to wood and blued steel, with the overall look seemingly somewhat angular.

With no great degree of cast or palm swell, most people, no matter if left and right handed should have little difficulty in mounting and shooting this Red Label. Technicalities aside, once you assemble the All-Weather you’re left in no doubt that this is a serious, no nonsense, all-American shotgun, down to the fact it still comes in a cardboard box. Come on Ruger, for £1,511, surely you can afford a plastic case given the amount you’ve saved on engraving?

Tipping the scales at exactly 8lbs, weaklings definitely need not apply. Likewise those who expect a Sporter to balance or swing in what might well be referred to as the conventional manner. With the point of balance set around an inch in front of the knuckles allied to natural muzzle heaviness, the hand that supports the barrels and forend has slightly more to do.

That said, and contrary to what other may say, the weight distribution and mass of the Red Label will smooth out most swings. Once you’ve adapted to how it feels and moves, particularly if you’re shooting ‘gun down’, this 12-bore’s ‘slow to start and smooth to move’ muzzle-weighted mannerism and gradual inertia come together to promote a controlled mount. Don’t for one moment think that rapid transferral between two opposing targets is out of the question. Quite the reverse, once mounted and moving the Ruger flows easily from one to the other, its character maintaining efficiency throughout.

Loaded up with Express Supreme Competition cartridges and choked Skeet-Skeet, scores were soon more than respectable. Equally, tightening the top barrel to ¼ but remaining faithful to the Express rounds, 50 Compak birds were soon decimated whilst a moment or two with one of Express’ patterning cards demonstrated regular, consistent shot grouping.

Performing well, irrespective of what was asked of it, at close of play the one unusual aspect of the All-Weather Red Label had more than made itself known. In looks and feel, this Ruger’s a Sporter, to shoot with it’s a heavy Skeet gun but when it comes to balance and overall handling, your senses tell you it’s a Trap gun. Theoretically, there is no logic to this description, but even if the gun’s unusual finish isn’t to your liking, the standard walnut/blue version could prove itself to be the shotgun you’ve always been looking for.

As with most Rugers, the All-Weather will mainly appeal to the collector, those who’s bent leans towards American shotguns, shooters who want a 12-bore that’ll stand up to the rigors of virtually any environment or a competition gun with slightly unusually mannerisms. Elsewhere than England, this Ruger will be happily accepted as a game gun and around a rough shoot, apart from the occasional comment or lunchtime conversation piece, it’ll be right at home.

What you will get for your money is a shotgun that comes complete with more than its fair share of charisma and one that probably - against the odds - is more than a handy tool to have about you out around the layouts. If you’ve never shot or considered owning a Ruger, give the All-Weather a go, you’ll probably walk away more than pleasantly surprised. Let’s face it, engraving and fancy woodwork doesn’t make a gun shoot any better.