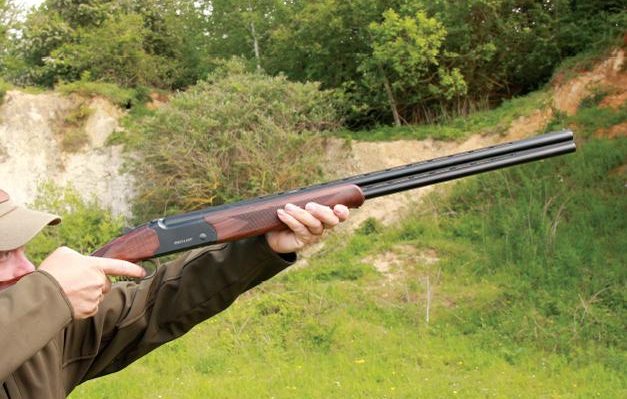 In recent years there has been something of a push forward with the more diminutive shotgun calibres, specifically 28-bores and .410s. This is great for both young shots and their parents, offering more choice for that first shotgun and also often resulting in the parent purchasing one for themselves. This is all good stuff as small calibre guns have something of a magic hold over me, although I already have two 28-bores the chance to test others must never be passed up so imagine my glee at having a go with Webley & Scott’s new 928 28-bore.

The 928 is an over & under with 28” multi choke barrels and comes with a set of five chokes from cylinder to full. Steel shot up to and including #2 can be used but not through chokes tighter than half, and steel larger than #2 no tighter than a quarter. The standard tang mounted safety also doubles up as the barrel selector as is common with single trigger shotguns. The action is blacked and has a solid functional feel and the wood whilst being unremarkable in terms of grain has a good oil finish with decent chequering that is not too sharp even when gripped firmly. The butt measures in at 14 3/4” with the expected pistol grip common to over & unders, generally the furniture fits well in the hand and is not too small so as to be uncomfortable even for adults. As an out of the box gun the Webley was all that I would expect it to be considering the price! Although I was a little disappointed that the forend was slightly loose from the start, which was rectified with a little packing.

Testing this little shotgun took on two forms, firstly I carried it with me for work in my day to day duties game keeping, conducting pest control and crop protection. For carrying round a trap and snare line the 928 was lovely, lightweight and of course as the cartridges are small plenty can be carried in ones pocket without them becoming a nuisance.

I used Trust 22 and 24-gram #7 and Bornaghi 24-gram #5 cartridges for work and they all performed well through the ¼ & ½ chokes in the gun. Even though the calibre is small several crows were cleanly dispatched with it at considerable distance, certainly they were shots I would have pleased to make with my 12-bore, the only frustrating thing was that I did not make them it was a friend of mine who has subsequently gone on to buy a 928 for himself. The light weight build of the gun makes it perfect for fast handling and it certainly seemed to point naturally where I wanted to shoot. Also being an ejector you don’t have to think about pulling out the empties either! These qualities all came together well when I had a rabbit clearance job to do in some rough pasture where open ground was in short supply so snap shooting in between tussocks was the order of the day.

The second stage of testing was done on one of our simulated game clay shoots, during this we used a wide variety of cartridges from very light 16 to the heavy 25-gram loads in #5, 6, & 7 shot using both plastic and fibre wads. Slightly over 200-cartridges were put through during two eight minute periods of shooting, needless to say the 928 got very hot and in fairness in normal shooting situations this volume of shooting in such a short time would be very unusual. However that being said all went well; there were no malfunctions with this Webley, though I did have a slight problem with fired cartridges not ejecting properly when the heat had really built up. Of course the barrels got terribly hot to the point where the heat could be felt through the forend.

Earlier I mentioned that the forend was slightly loose, and due to the anticipated heating we removed the packing prior to the clay shooting. The perceived movement in the forend on recoil from the first shot was to start with off putting for the second shot and took some getting used to but when this was overcome no problem.

Interestingly two other friends have now purchased 928s having got to look at the test gun and not wanting to spend well past £1000 on other makes and theirs had no issues with the forends. Very impressive during the clay shooting phase was that the chokes did not become loose with all the heating. It is not unheard of for chokes to either work loose or even become welded into guns when the barrels get very hot! I have seen some very expensive clay shooting type guns suffer from both so for a moderately priced shotgun to avoid this goes to show plenty of build quality.

Really for a shotgun in the lower end price range the Webley is a superb choice for parent or youngster alike, or a shooter who is looking for a low recoiling and less noisy calibre. All in this 28- bore is a great little shotgun and a lot of fun to use and certainly well worth the price. Webley & Scott are also making a .410 model which I am hoping to get hold of soon to look at, if it is anything like the 928 I can’t wait.