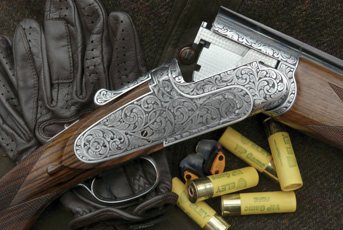 Fresh from the proof house, Mark Stone is the first to try one of Webley & Scott’s new 3000 Jensen over-under sidelocks - and he is seriously impressed

Over the years I’ve handled, evaluated and passed comment on more weaponry than I care to remember. Equally, I’ve shot with a whole cross-section from the cheapest to the most expensive. It’s also been a fact that I’ve shot and liked some of the cheapest you can buy and disliked various examples that by rights, I should have been in awe of and that includes some of the top names, their only redeeming feature being the name of the maker.

Reason being, no matter who built them or what they look like, you can tell in an instant as to whether a gun fits you or if you’ll be able to shoot with it and more importantly, did its maker get it right. If a shotgun’s right you just know it, no end of fiddling altering your immediate perception. What I’ll now say is that whilst Highland Outdoors have been working hard with their Webley & Scott range of shotguns, with the introduction of their new range of sidelocks, the company has suddenly once more elevated themselves to the ranks of the serious makers.

Never a maker of ‘Best’ guns, Webley & Scott carved out their original reputation by making affordable shotguns that were well made and above all else, reliable, many of which saw service throughout the world in ‘Empire Grade’ form. These were basic models that eschewed frippery, instead providing their owners with dependability and resilience to whatever the conditions threw at them along with rough treatment and questionable handling. In other words they were built to last.

That said, Webley & Scott did produce some nice, attractive guns, and it’s here where Highland Outdoors have stepped in, their Webley & Scott range already featuring reasonably priced, dependable shotguns and now some genuine examples of upmarket smoothbores, priced at a fraction of the competitions’ offerings.

To describe the new seven-pin Series 3000p Jensan sidelock 20 bore as stunning would be an understatement; this deft and delicate over-under is an absolute gem. And before you comment on the gun’s Turkish origins think on this, the Turks have been making guns of all types more or less since they were invented, which means probably longer than the rest of Europe.

Like all Webley & Scott’s sidelocks the Jensan comes complete with blue velveteen slips and a fitted leather motor case, the unfastening of which unveils a shotgun that embodies the true meaning of the term ‘wow factor’. From the profuse coin engraving that covers every cubic millimetre of the over-under sidelock action to the quality of the walnut, every surface detail of this new 20 bore is a visual delight and I don’t say that lightly.

The action, like most sidelocks, is quite long by comparison, the effect seemingly lengthening the entire gun. Lustrous scroll coin engraving covers all the metalwork including the top and bottom tangs, fences, top-lever, manual non-selective safety and broad trigger-guard; the only exception being the blued trigger blade. But before you conclude that the bluing is out of place, it perfectly compliments the blued and raised gold bar finish of the cocking indicators that sit on either side of the action whilst the depth of engraving has resulted in the fences, top-lever and safety blending in adding to the gun’s flowing lines and testament to the Jensan’s physical and artistic attributes.

On the left of the receiver is the lock plate latch that to all intents and purposes looks like a scaled down top-lever. Push it gently in an anti-clockwise direction and it will start to unscrew but be careful, the other end of the threaded spindle holds the right hand side lock plate in position. Once unscrewed and removed, by lightly screwing the latch into the small threaded hole on the other side, the opposite lockwork can be gently removed. Not something you want to keep doing but perfect for gently cleaning, light lubrication and ease of access when the Jensan goes into your dealer for annual servicing.

However, I promise that the urge will occasionally get the better of you and that you’ll remove the sidelock if only to see what lies beneath. Like all quality pieces of engineering and design, the class of the Jensan continues in places you can’t see, the exacting componentry and precise cut outs equal to the high standards of the rest of the gun, even though they are hidden away for most of the time.

As might be expected the semi-oiled walnut Prince of Wales game stock complete with rounded grip is excellent, the straight grain indicative of the high grade and inherent strength whilst a concealed buttplate and fine chequering allows an unimpeded mount when wearing traditional game shooting attire. Fit and finish is first rate as is the close chequering and drop-points that form just to the rear of the lockwork, a hallmark every maker applies to their higher grade guns.

Hooking the Jensan up to the Arrow Laser Shot was more a matter of ritual than trying to gain any practical or physical information. After just a couple of dry mounts it was already a given that the gun would shoot flat and that the dimensions were exactly how I like them. The Jensan weighed 7lbs 4oz and balanced directly beneath the knuckles which gave the gun a positive, reactive pivot point along its total length of 45 5/8”, the slightly heavier than normal mass adds to the Jensan’s quality and smoothness of handling. The view from the stock meant all I could see was the bead, exactly how a shotgun should be from my perspective.

Drops at comb and heel were 11 5/32” and 2 ¼” with a length of pull measuring 14 9/16”, my right hand settling comfortably around the semi-pistol grip, my index finger falling neatly on the crisp 6lbs break trigger-blade, the almost imperceptible palm – swell just large enough to settle the hand into the correct position whilst still promoting fluid handling. Fitting the two widest chokes, Cylinder in the bottom barrel, ¼ in the top, the first of two rounds of thirty clays awaited at the final evening of Bond & Bywaters’ evening shoots. Loading up with Eley CT Twenty 28 gram and Eley VIP 20 gauge 32 gram clay and game loads, the first physicality of the Jensan was instantly apparent in that you can hardly feel any recoil whatsoever, although the shattering clay targets told a different story.

Given the balance and weight distribution along with a willingness to swing that exceeded even my 20 bore experience, anyone who picks up the Jensan for the first time will have to slow their swing otherwise you’ll over lead nigh on every target, the gun effortless when it comes to a controlled swing of whatever speed even on opposing, simultaneous targets. Most 20 bores handle well but the Jensan is a revelation – it’s effortless – and as a walked up gun seeking out woodies, bunnies etc., it’s up there with the best. When I’m out and about alone I tend to carry my shotgun loaded but open, this 20 – bore ideally suited to the style. Snapping together in an instant, the Jensan whips instantaneous to the shoulder along with the correct sight picture. The end result is a gun/shooter combination that seemingly can’t miss. If you’ve never tried a 20 bore and at times wonder what’s so great about them, give the Jensan a go.

One point some will pick up is the fact that the safety doesn’t automatically apply itself when the gun is opened. Whilst some shooters insist upon an auto safety on a game gun, I don’t. My guns remain open until the moment I want to shoot. An auto catch option is available but I prefer it as is.

Owning and shooting a nice game gun definitely adds to the day’s enjoyment. On a day’s driven shooting, there’s a certain degree of one upmanship where the shooters all take a sideways glance at the other shotguns within the group, hoping that theirs is one of the most desirable or that it’ll attract positive comments and allow for some bashful boasting. The beauty of the Jensan is that it falls neatly into the inverted snobbery category, as you Name Webley & Scott 3000 Jensan Calibre 20 – bore Barrels 28” Action Sidelock over – under Stock Walnut ‘Prince of Wales’ game   Weight 7lb 4ozChokes Flush – fit Thin Wall multi Price £5,799 srpContact   Highland Outdoors tel.01858 410683 www.highlandoutdoors.co.uk Thanks to: Eley; www.eleyhawk.com   Bond & Bywaters; www.bondbywater.co.uk Arrow Laser Shot; www.arrowlasershot.comTECHNICAL SPECIFICATIONtake no end of pleasure in the fact that many of your day’s companions will have paid small fortunes for their shotguns and have ending up with something that can’t compare with your new Webley & Scott.

As it stands, the Jensan 20 bore will set you back £5,799 but the Italian or Spanish equivalents will cost at least three times this amount. Similarly, one of the new English makes finished to this standard will be up near the twenty thousand mark and I guarantee none of them will look or shoot any better. And whilst other’s prices go up, with the Webley & Scott they go down.

The Jensan is what Highland Outdoors refer to as a Special which means the slightly less ornate, colour casehardened version comes in at £4,599 although if you want to push the boat out, you can have both with extra barrel sets, an adjustable or different patterned stocks such as a straight grip and different forend, walnut upgrades, trigger options and one or two other options as part of the ‘Bespoke Program’ that allows you to tailor the gun to your own requirements. For myself I’d leave the Jensan exactly as is although I could be seriously tempted to mate it up with a 12 bore version.

Every now and again I encounter a new shotgun that I know for a fact will carve out a niche and reputation for itself and become a classic of its type, Webley & Scott’s new Series 3000 Jensan is most definitely one of them.