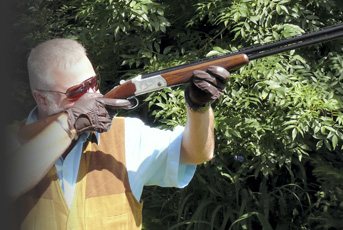 Imported into the UK by Entwistle Guns of Preston, this diminutive Yildiz 410 is taking the sub-gauge market by storm, with proprietor Mike Mogilnicki in the enviable position of not being able to service the demand. Either as a starter gun or for driven grouse and partridge, the SPZME has rapidly built up a dedicated following. Where the Yildiz wins out when compared to others is in its combined value for money and adaptability, two criteria never normally associated with this calibre.

Starting with the action, it’s the decoration that stands out. A perfect mirror image of itself, both sides of the satin alloy boxlock feature a brace of partridge in flight over trees and fences with foliate and light scroll work whilst a spaniel and partridge adorn the base. Similarly, the trunions and top lever pivot feature a symmetrical pattern with further foliate to both the lever and trigger guard.

For ease of maintenance the face of the action features a steel insert held in place with a single screw. Built as a 410 and not a larger gauge scaled down, the body, trigger – plate, rear pillar and top strap are machined from solid, whilst all parts of the lockwork are well finished, the whole guns offers a well assembled feel.

Finished with a quality matte black surface the barrels are well struck with wide slotted vents in both the top and mid ribs, the whole locking into battery courtesy of a deep under bolt. But it’s the muzzles that set the Yildiz apart in so much as they’re multi-choked.

Supplied complete with a set of five, flush-fit tubes, each one is easily identifiable by the number of notches machined into the end, full having just one, cylinder five and so forth. Rounded off with a quality oil finish, both the semi pistol grip stock and rounded forend exhibit admirable quality, are well grained, precisely chequered and boast excellent levels of fit.

Before we go any further you have to decide what your intended targets will be. To that end my suggestion is be it a bunny or clay, keep the chokes tight for anything at medium to long range, full and ¾ are absolutely perfect from my own point of view! Though close up squirrel and crow potting definitely suits the wider restrictions.

Loading up with 21g Express 410’s along with some 32g Winchesters both filled with 6’s, the SPZME soon proved its worth and accuracy around Bond & Bywater’s 30-birder. The overriding factor is that this Yildiz is a full sized shotgun with an adult stock and well sized pistol grip that combines drops at comb and heel of 1 7/16th and 2 7/16th plus a length of pull of 14”. Add to this a barrel length of 28”, a cross-cut top rib of 7mm and an overall weight of 5lbs 4oz. The balancing point is directly beneath the hinge point so you arrive on the peg with a shotgun that requires nothing more than finger tips to control each minutia of movement. Barrel selection is carried out in the usual fashion, the broad, thumb-sized automatic safety catch sliding left or right to determine which tubes fires first. Whilst the 3” chambers and truly outstanding ejectors add versatility and a speed of use to a gauge oft associated with mediocre killing power and fumbling operation.

If there is a concern about this lightening quick shotgun it’s the trigger mechanism. The well sized blade breaks at a fraction over 6lbs, but the dwell between the second barrel firing can be annoyingly slow. Mechanical in procedure and at times slightly coarse in feel, you have to make a conscious effort to completely release the blade after firing the first shot otherwise you’ll find yourself and the Yildiz seemingly frozen in time.

The beauty of the Yildiz SPZME 410 is that the variations seem almost endless. At £695 the gun seen here is excellent value for money although £495 gets you more or less the exact same minus the ejectors, something I personally don’t like doing without especially on sub gauge guns. Conversely you can go the other way finishing with the Special Lux that boasts profusely engraved sideplates and significantly upgraded walnut; whilst all models can be had with 26” or 28” barrels.

The choice as they say is yours and your wallets. But whichever spec you finally decide to go for the end result isn’t so much a shotgun more a feather light wand that, with some magnum ammo onboard inspires you to push this small calibre and gun beyond preconceived limits.

For many the idea of going back to a 410 is a thought that never enters their head, only the Americans maintaining their passion for this oft denigrated gauge. Mark my words, with the SPZME, Yildiz have already made significant inroads into changing numerous minds on this subject. So don’t be surprised to find one being used in the butt next to you, the owner downing some impressive birds and having a fantastic 410 time in the process.

We Reckon!
• Buy it for your son or daughter and use it yourself
• A multi-choke 410 at this price; no way…
• Trigger mechanism does need smoothing out