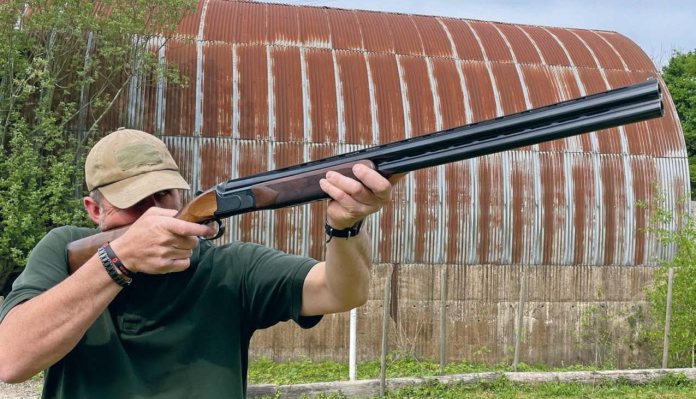 Zoli is not a manufacturer that I am familiar with, and until the test gun arrived from Edgar Brothers, I had only ever seen it in photographs.

The Zoli family has a long history in gun making and ancestors of the family have been involved with gun production dating back to 1490. In 1845, Giovanni Zoli became a flintlock maker of some renown.

Scroll forward a little more and in the post-war years, Antonio Zoli started the business as we know it today. Zoli is now in its third generation and constantly adopting and adapting new technologies whilst striving to maintain tradition in the finished product. Everything from planning, research and production is all done in their factory, which also has a custom shop able to satisfy all requests.

The Zoli One is an exclusive gun made for the UK market and a quote from the information pack reads: “The Zoli One was created to give UK shooters a stepping stone into the world of luxury Italian craftsmanship”.

At first glance, the Zoli One bears a resemblance to a Perazzi, particularly in the shape of the stock and forend, but this is no copy of somebody else’s work. I opted for the 29.5” barrelled model but 32” tubes are also available. My tester came in with an overall length of 47”.

The tubes are silver soldered, show 3” chambers and are superior steel proofed, plus they are also vented and accept flush-fit multichokes. The gun comes with a selection of five (C, IC, M, IM, F).

There is a tapering rib from 11mm to 7mm, helping to draw the eye, which is finished with a white bead at the muzzle.

The forged alloy-steel monolithic action uses the Boss type lock system and when the One was open, there was no wobble and it shut with a confident and crisp click, emphasising the high standard of craftsmanship in its manufacture. The action has a black finish that’s complemented with basic, but attractive scroll engraving.

The shotgun shows a single selective manual safety that felt positive when moved between fire and safe. The trigger unit is completely detachable to allow for easier service and maintenance. Plus, in use, the pull showed no slack and broke consistently each time.

Zoli has used Turkish walnut and the forend and butt match each other well. Look closely and you will find it is all oil finished and there is some well-cut diamond chequering on the forend and grip.

The colour of the wood and the black metal suit each other perfectly. There is plenty of meat to the forend, but not too much to negatively affect those with smaller hands. The stock is finished off with a rubber butt pad and the length of pull is 14.5”. For those that require a longer stock, it would be easy for a good gunsmith to add a longer pad or to fit spacers between the existing pad and the stock. On the test gun, the wood-to-metal fit was first class and I have no reason to think that this would be any different on any of Zoli’s other products.

The point of balance was right on the hinge, and when moving the gun into the shoulder, the One felt well balanced and naturally pointed at the target. The tapered rib certainly did the trick of drawing the eye and for me, allowed quicker target acquisition.

Shooting the Zoli One was a real joy and my only regret was that I only had it for a limited time. Some shotguns seem to require a great effort to shoot but everything just flowed naturally with the One, from mounting to acquiring the target and subsequently hitting it. Well, sometimes anyway.

On test, I used it with ¼ and ½ chokes fitted, as I usually find that Italian chokes tend to be slightly on the tight side, which is something I prefer. Most of the shooting I did with the One was while I was doing my trapping rounds, and I managed to drop several crows and magpies, usually on the first shot. I had a particularly memorable left and then right crow when calling them early one morning, with the second one being a real barrel stretcher.

Unfortunately, I did not get the opportunity to really put the gun through its paces on a simulated day to see how it coped with getting very hot after firing large numbers of cartridges in a short space of time, but from what I experienced, I have no reason to think the One would not have coped well with this intensity of shooting.

I shot a wide variety of cartridges from 24 to 36 grams, predominately with No.4 and No.5 shot, and on the whole, using fibre and felt wads. The patterns held well and the business was done in terms of hitting and cleanly killing what I was shooting at. The lighter loads exhibited virtually no felt recoil, and while I knew I had fired the heavier loads, they were not uncomfortable to shoot. So, using 32-gram loads all day would not cause any discomfort, but heavier cartridges could be a different story.

My final thoughts on the Zoli One are a little varied really. It is a shotgun that handles and shoots well, plus makes the most of modern technology whilst maintaining tradition and looking stylish. In terms of price, at £2800 it is at the higher end of the market for this bracket of shotgun, especially when comparing it to some of the competition. However, this would appear to be money well spent, and I suspect it would end up being a gun for life. The only downside would be if it got scratched or superficially damaged in a pigeon hide or while bouncing around in the truck. Given the price, I would probably burst into tears!

Would I be happy to own a Zoli One? Definitely yes, but it would have to be a best gun for me to use on game or for clay pigeon shooting only.