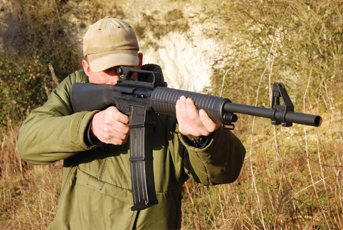 I no longer shoot Practical Shotgun (PSG) however, I was there at the very beginning in the early 1980s when it was shot for the pure fun of the event and probably carried on for about 10-years. Detractors would say it was nothing but a speed reloading exercise for hooligans! As if you could not hit a static steel plate with a shotgun then you might as well go home. I would disagree as any form of shotgunning is not a case of simply pointing in the general direction and pulling the trigger! But would also say those who could load quickly certainly had the edge over their slower companions.

Firepower meant some form of repeater with a magazine extension that bought the capacity up to 8 or 10. But we all dreamed off a box magazine that would allow fast mag changes on–par with say an AR15. No more fiddling with individual shells just pull it out, slap it in and you were ready to go. This in theory would have very much levelled the playing field between the fast loaders and the frantic fumblers! However, there’s no substitute for shooting skill regardless of the gun you use!

Though there was much talk about box mag guns I did not see my first example until the middle 1990s in the form of the Franchi SPAS15. The next big thing was the Saiga 12 – essentially a 12-bore AK47 it caused quite a stir as it offered an 8-round capacity. From what I can make out the UKPSA re-wrote the rules to incorporate the box mag gun, on reflection I suppose they had to!

But now another has appeared in an M16-shaped package, the Turkish AKDAL MKA 1919. I got a rumour of it last year and did not think a lot would come of it as it had a 19” barrel. However, Ron Flint (Cactus Arms) has them in a UK-legal format that applies to the minimum length of barrel and gun at 24” and 40” accordingly. So though smoothbores they are a Section 1 firearm held on an FAC.

Controls are M16 with an automatic last round hold open and manual bolt release on the left. The mag button sits on the right in front of the trigger guard and the empty falls free. The safety is on the left under the thumb and flips up to FIRE (red dot) and forward for SAFE (white dot).

The build shows a fixed A2 butt and full-length, oval forend. The receiver is flat-topped with a large, removable D-handle complete with adjustable rear sight. Up front on the barrel is the classic, M16 A-frame.  The build uses a one-piece, all-polymer lower receiver and butt assembly with rubber recoil pad. The upper is aluminium alloy and three screw-in multi chokes and key (Full, Modified, and Cylinder) are included, as are sling swivels.

Despite its looks the gun uses a conventional, gas/piston semi-auto mechanism with the bolt locking into the chamber extension by a single rising lug much like a Remington 1100. The layout goes for a gas port that vents into a shroud under the barrel. A rod passes though this that supports the twin operating rods, guide and return spring. Inside the shroud is a free-floating piston that pushes back to start the cycle. At the front end is a shorter free piston and a spring assembly that screws on and gives a degree of self-regulation. In front of this is a lock ring. When all assembled the forend slides on and is located by an end cap, which is held in place by an external nut that screws to the end of the central rod.

Feed is by a single column box mag and the gun comes with 2 x 5-rounders and a 10. It’s chambered for 3” shells and to get over the differences in cartridge length one mag is set up for 2 ¾” and the other 3”. This has always been an issue for box mag guns as the flat-nosed nature of the ammo means presentation is critical. My .410 Saiga semi will only function with 3” loads, use 2 ¾ and the round presents too soon and jams before the chamber.

The gun gives all the natural handling of an M16. The iron sights are only of any use for slug stages! The rear offers an L-flip with an aperture and a U-notch with a windage knob on the right. The front unit clamps to the barrel via two cross bolts, but is not split at the base so cannot be slid off as the choked section of the tube is slightly wider in diameter. The sight picture tends to obscure more than it shows. Personally I’d remove them and fit a red dot for slug use.

Operation is simple-load and cycle the action and you’re ready. The safety sits under the firing hand thumb and operates easily with no loss of hand position. The trigger pull is heavy, at first you think the safety is on but you get used to it! The auto last round hold open is good and the mags free fall from the well, however, I found the release button a tad short. The bolt release is a bit stiff, but a bit of effort trips the action easy enough.

I ran a cross section of ammo through the 1919 with CBC’s OO Buckshot and slug along with a 28-gram Winchester load. The magazines were initially a bit stiff to fill to capacity and I was running the 10-rounder on eight until it eased in. The bolt handle though useable is also a tad small for my liking!

Slapping in the first 5-rounder loaded with bird I tripped the bolt and was rewarded with that familiar CLUNK & LURCH of a semi-auto chambering. Squeezing the trigger I had to check the safety was off as it’s a tad firm! Then it was just bang, bang, bang and the next second the action locking open and that familiar sweet taste of burned propellant.

The reload highlighted the shortness of the mag button and in went 5-rounds of OO buck. This time I pulled back on the bolt handle with the same results and the 1919 shot them all, so far so good! I have to say I did not notice any real difference between the 2 ¾ and 3” magazines as bo

The 10 proved a trifle awkward as it gave a few miss feeds. Most of this could be laid at the foot of the magazine spring as it needs to be strong to shift that weight of ammo vertically. This was borne out by the fact when it got down to 5/6 rounds left it ran reliably. However, the more I loaded it the better it got as it ran itself in. In truth the 10 is massive and cumbersome and I would use the fives by preference as they make the gun handier!

The 1919 handled slug easily too, with recoil being acceptable. The iron sights did get in the way on a point target so I switched to a red dot and simply rotated the front sight out of the way. Accuracy testing showed it could keep the rounds in a 1 ft circle at 100-yards.

Overall I was impressed with the looks (love that M16-style) handling and reliability all being good. I don’t shoot PSG anymore but if I did then I’d be getting the dosh together to buy one of these. Though I would also be making a few improvements as I have detailed, definitely amongst other things a trigger job, binning the sights and getting a free-float forend!

Ron told me the 1919s are selling about 14,000 units per year in the US, and taking the 3-Gun circuit by storm. In the UK Andy Haines won his first UKPSA comp at Bisley with his straight from the box. Custom houses are working on it and I have seen some nice stuff from Firebird Precision with a free-float forend with side cocking on the left and a butt conversion that allows the fitting of an AR15 buffer tube and 6-position stock.

However, the CAR15 stock might be an issue in the UK if it drops the length below 40”. Ron told me he has custom triggers, will soon have new forends, railed and plain, larger bolt handles and mag release buttons. He will also be manufacturing the AR15 buffer tube adaptor and early in 2013 should have a side-racking forend. He includes in the price 2 x 5 and 1 x 10-round mags.