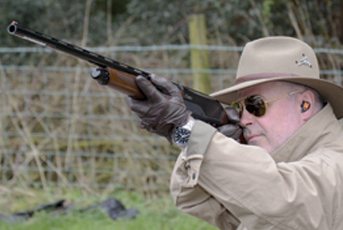 For just over six hundred pounds I couldn’t get over just how well made Armsan’s A612S 12 bore gasser was. Whilst the 12 bore I tried was in competition guise the A620 presented here is even more persuasive, importer’s Viking Arms now adding this 20 bore to their Armsan range. A stylish black action mated to nicely figured walnut, a set of three flush-fit chokes and stock shims all in for £500. In other words, the A620’s a winner even before you unpack the kit. If its elegant semi-auto looks you’re after here it is. If its value for money you’re after, here it is. If its lightening fast reactions and handling you’re after, here it is. If it’s a dedicated pigeon gun or an incredibly lightweight, walk for miles without hauling excessive weight, upland, magnum chambered sub-gauge you’re after, then here it is.

Tell you what, I won’t bother with the rest, all you need do is go and buy an Armsan A620 and enjoy one of the most magic wand gassers on the market and I’ll go home. Yes, this Armsan is genuinely that good and should - if there’s any justice - fly off the dealers’ shelves, the A620 fulfilling every requirement of the dedicated pigeon shooter, the 20 bore tending to be the gauge of choice for many of those who shoot big numbers of woodies.

Seriously though, what do you get for your frugal investment? What you don’t get quite sensibly is a plastic case, since autos of whatever type rarely if ever return to them once they’ve been unpacked and assembled. Within the carton is the A620, a small black plastic case containing two of the three flush-fit choke tubes, a bright orange key and four stock shims.

The gun itself embodies Armsan’s familiar looks and styling, rich in colour, gloss finished walnut that’s perfectly mated to the metalwork, a shiny blacked barrel and three-tone, dovetailed alloy receiver. Both pieces of furniture have neat panels of chequering that more or less fully envelope both sides of the forend and semipistol grip whilst the size of the gauge means even with the action spring situated around the magazine tube, Armsan have been able to keep the nicely extended forend as slim and elegant as possible, adding to both the A620’s aesthetics and neatness of handling, a large tapering mag cap and simple ratchet holding the forend securely in place. The stock, whilst appearing slightly smaller than the 12g version, is still fully sized with a thin rubber recoil pad and solid insert on the heal that facilitates drag free mounting, whilst the slim, open angled grip will suit large and small hands alike.

The 28”, steel proofed, 3” chambered barrel is topped off with a 7mm stippled long vent rib and a high visibility extended bead that flares ever so slightly towards the muzzle to accommodate the choke tubes whilst a twin ported barrel ring and simple self-regulating valve and an extended tang locate the barrel onto the magazine tube and into the receiver. Gloss along the top to match the barrel, the upper section of each side is semi-gloss with matte lower panels and base, the Armsan and A620 motifs the only form of minimalist ornamentation.

Powered by the long action spring that’s situated around the mag tube complete with a double-guide slide, the entire cyclic system has been based around the time and tested Italianate system that has now become the norm for most Turkish manufacturers. In turn a self-locking satin finished one-piece bolt complete with a sizable claw runs smoothly within the receiver, a matching bolt-release located just below the ejection port, the bolt itself automatically locking in the rear most position - so no small catch to locate or operate.

Invert the A620 and the simple shell lifter comes into view just in front of the black polymer trigger-guard. The crossbolt safety located to the rear of the guard. In other words the layout and operation of the A620 adheres rigidly to the traditional semi-auto format emphasising the gun’s intentions to achieve instant familiarity for both existing semi-auto users and those new to the single-barrel configuration. One point of note is that when assembling, the bolt needs to be forward before being drawn rearwards at the same time as the barrel extension is pushed home into the receiver.

Unlike some manufacturers who have the annoying habit of scaling their 20-bore semis down to almost toy like proportions, Armsan have ensured the A620 is full sized where it matters.

The gun has an overall length of 48½”, an overall weight of 6lbs 2oz along with drops at comb and heel of 1½” and 2 5/8” allied to a goodly, adult friendly 14 5/8” length of pull although the weight of the trigger, creep free as it is doesn’t release until an average pressure of 7lbs 9oz has been applied, the A620’s one and only mechanical downside.

Hooked up to the Arrow Laser Shot the A620 revealed itself to be the personification of a flat shooting shotgun, the view from the stock interrupted purely by the red bead. The physical properties that pre-shoot mounting highlighted was that although the A620 balances directly beneath the throat of the chamber, the general lightness and poise between the hands meant the gun’s fast handling traits would need a slower style even on fast opposing birds.

Starting out with ½ choke fitted and loaded up with 24 gram Express Super 20 shells filled with 7.5 shot, my first impressions were confirmed, the A620 pulling through the first five pairs of the pending fifty far quicker than I’d allowed for. Similarly, of the five birds taken the chosen restriction seemed surprisingly tight, a moment or two’s investigation showing up that the ½” was more akin to 5/8” and that opening up to ¼” was the equivalent to 3/8”, full being a seriously tight choke. To that end, although the resultant patterns are evenly distributed, the chokes are marginally more restricted than indicated, which in general isn’t a problem but it’s worth bearing in mind.

Apart from this initial early glitch the A620 went on to provide me with a score well into the 40’s with some off-card targets consisting of random simultaneous clays picked out of the sky with pleasure and, may I say, style and aplomb. Shift forward a few hours and throw in some heavier loads and some unsuspecting squirrels and pigeons bit the dust with ease. Recoil is comfortable even with more punchy cartridges, to a degree that even those sensitive to recoil will find the A620 very user friendly.

What you will have to get used to is the fact that if you aren’t careful when you first it seems to wag about and that you’ll swing too far through your targets, the Armsan’s muzzle accelerating from rest with an inspiring lack of effort. At the operator’s end the cyclic speed is quick and refined, the empties thrown far and wide, the whole process of shooting and cycling almost featherweight. All you need do is slow down and develop a more relaxed, refined style, the gun almost telling you when you’ve got it right.

For whatever reasons, Turkish shotguns are still looked down on by many shooters as some form of second class citizen and not of the quality as the established European or American brands. But for those with an open mind, Armsan’s A620 is testament to the fact that when it comes to semi-autos, Turkish built guns are as good as any you’ll find. You’d be surprised how many of the big names both sides of the pond have their names emblazoned along the side of Turkish built smoothbores. I’ve said it before about various shotguns from Turkey but I’ll say it again about the A620. This is a great little gun in virtually every respect only the weight of the trigger pull being a tad heavier than I’d have liked it to be. As an intensive pigeon gun the A620 will shine whilst equally, if your not bound by the English fixation with doublebarrelled game guns, as a friend around the boundaries with the dog, a stunningly fast walked-up snipe gun, a workmate on crows and other unwanted pests or as an honest, capable sub-gauge clay breaker, the A620 fits the bill in every respect. The only bill it won’t give you is a big one when you buy it.