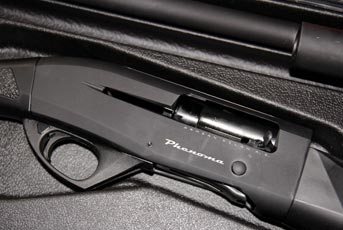 One of the growth areas in shooting is semi-auto shotguns. One of the most successful, modern, budget makes was Hatsan of Turkey with their Escort. Unashamedly a Beretta 300 clone, at around the £500 mark it offered a tough and shootable self-loader for many needs. Newer and though from the same country if not stable came ArmSan with their A612S, which as I recall Don Brunt looked at in the April 2012 edition of the mag. His final comments were: “a well built budget gun, surprisingly good out on the range and fantastic value for money.”

At less than £500 this is the sort of gun many of us are looking at for clay shooting and field use. ArmSan are now offering a new gun called the Phenoma, which looks to be a natural progression in terms of development though seems to draw it’s cosmetics from a number of sources. I saw hints of the Winchester SX3 in the butt, along with a Benelli Nova-type trigger guard and a receiver not unlike the Fabarm XLRS.

Inside the Phenoma uses a standard gas/piston system with a Remington 1100-style bolt that locks into the roof of the chamber extension with a single, rising lug. The major difference being a separate floating piston that pushes the operating rods rearwards to cycle the action.

Their website shows a dazzling array of finish options, with three camos - Realtree Hardwoods Green and MAX-4 along with Advantage Timber. Also desert tan and olive drab, plus walnut and laminate furniture, coloured receivers and a slug gun with iron sights and a cantilever scope base.

Unlike the earlier A612S the Phenoma comes in a plastic carry case, which is better than a cardboard box. It also arrives with three, flush-fit multi-chokes - Cylinder, Full and Modified, a fitting key and shims to adjust the butt. My tester was the black synthetic, steel-proofed and showed a 3” chamber to its 28” barrel. ArmSan’s website shows a choice of three calibres too; 12, 20 and 28-gauge.

The furniture has an American-style, low combed butt with a decent, thick recoil pad. Length of pull comes at 14.5”, which will suit most shooters, though I reckon a slimmer butt plate would be a good accessory for those with shorter arms. The forend is long, slim and tapers to the front; both this and the grip feature textured panels and the material used is slightly tacky to the touch and provides good adhesion. ArmSan include fixed 1” sling swivels with the front one set in the end of the very long magazine cap.

According to the website guns come in both 2+1 (Section 2) and unrestricted 4+1 (Section 1) options. My test gun was a Section 1, though showed a basic, pull-out magazine restrictor rod that reduced the capacity. This I feel has been done for the US market for their legal requirements on some forms of bird hunting. Be aware with the limiter fitted your capacity might be 2+1 but as it’s removable the gun would be considered a firearm (Section 1) due to its capacity potential.

The Phenoma shows decent modern styling with the typically low comb offering a ‘peep-over the action’ head position, which suits my shooting style. The barrel shows a low and slim (8mm) ventilated rib ending in a Day-Glo red element from LPA of Italy. By my lights a good, all-rounder. The forend gives lots to get hold of, so whether you have short or long arms there’s something to grab without cramping the supporting arm!

The large, triangular trigger guard is a bit in your face but the bow is deep and wide enough for easy access by gloved fingers. At the rear is a standard, cross-bolt safety but three-sided as opposed to round, which I found overly firm in operation. The top of the receiver shows a machined-in ½” dovetail, doubtless for optics and done to appeal to pig hunters!

Controls are simple and few with a slotted shell lifter; just in case you get a cartridge jump back when the bolt is closed, though it does not need it. The cocking handle is a bit small, which seems to be a common fault these days with most semis! It also looks a little angled back; frankly I would have liked something a little bigger, I could just see a cold/wet finger sliding off it in a moment of panic!

Directly underneath is a large bolt release button, which is well placed for instinctive operation as you drop the first round in the ejection port the finger automatically falls on it.  On the other side is a magazine cut-off switch, which takes the form of a rocking lever, it’s easy to operate with no chance of accidently setting it. What I particularly liked was the cut-down loading port, which offers fast and easy access to the magazine, even with gloves on. This is also aided by the red anodised, aluminium mag follower.

The gun ran best with loads from 28 grams upwards and the potential of a 3” steel option makes it a good bet for wildfowling. It took a couple of boxes of shells to run it in but after that it was reliable. Trigger pull was workable with a slightly mushy 4-5 lb break, again something I have come to expect from semis! It also patterned acceptably. To be honest there’s not a lot to dislike about the Phenoma if you are shopping in the budget semi area and want a good looking and modern working self-loader then it’s well worth consideration.

AGAINST
Not perhaps the finesse of the more expensive semis

VERDICT
It works, it shoots and won’t break the bank; well worth a look