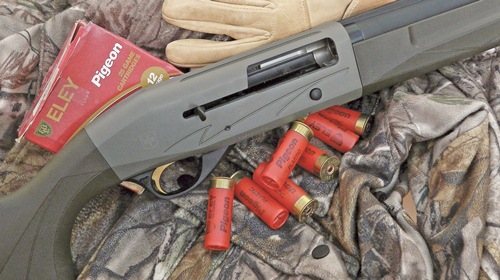 Until Wildhunter became ATA’s UK importers, all that British shooters could do was gaze longingly at the manufacturer’s extensive display of some of the most stylish semi automatics to be seen. From exhibition walnut, impressive engraving and inlays all the way to synthetic models. As distinct in looks as their more ornate counterparts, these guns were and are designed for hard work and extensive use, all the while still looking distinctively different in comparison to the rest.

So when one of the Neo Synthetic Green 12-bore became available at T&JJ McAvoy’s, one of ATA’s newly appointed service centres, it was with more than a degree of enthusiasm that I took delivery. Having only just trialled one of the new ATA SP over-unders, I was more than convinced that one of the inertia driven semis would more than likely live up to the looks – and the reputation the ATA range of shotguns is rapidly forging for itself.

To describe the Synthetic Green as greenish is something of an understatement, everything about the gun apart from the barrel is a varying shade of the verdant hue.

And whilst the colour might have something of a sickly contrast when set against one of ATA’s familiar bright blue travelling cases, as a 12g that blends in without the need to resort to camo, this gun is the way to go.

Complete with a set of four flush-fit choke tubes, additional stock shims and an extra butt spacer, the few seconds it takes to assemble the Neo is all you require. Black anodised, the 28-inch barrel complete with 3-inch chamber, 7mm vented rib and red bead, feeds neatly into the alloy receiver, a simple barrel ring and large stylised mag cap locking the long contoured forend into position. Slightly paler in colour than the green of the synthetic furniture, apart from the ATA logo etched into the right-hand side and discreet diagonal lines, the matte finished alloy receiver relies on its lines and simplicity of execution when it comes to visual appeal.

A large bolt handle draws back the black, two-piece rotating head bolt that in turn slides to and fro past a wide ejection port, black release and over a long black shell lifter. Similarly, the gold plated trigger-blade sits tight to the rear of a black guard, a triangular cross-bolt safety set in the rear span, the bolt lock on the right-hand side.

Echoing the receiver’s detailing, the game stock, unlike many synthetic stocks, is full-sized with neat panels of moulded checkering matching those of the forend. Fitted with a profiled soft rubber butt pad that helps keep the gun firmly and securely pressed against the shoulder, my only personal concern is the grip.

Comfortable and nicely sized, from my own point of view I’d like to see the curvature tightened ever so slightly, a small alteration that would allow me to close my right hand just that fraction more. This one almost infinitesimal point aside, every aspect of the Neo is well thought out and well-made, and the fact there’s more than a passing nod to a well-known Italian maker and their inertia driven guns is no bad thing.

A moment spent with the Arrow Laser Shot confirmed the Neo’s flat attitude whilst the balance centred on a point directly beneath the ejection port meant the 7lbs 4oz weight was neutral, so allowing the Neo to effortlessly pivot both between the hands and during the swing.

Length-wise, unless the additional butt spacer is added, the gun’s overall dimension of 49¼-inches makes for a usable measurement in a variety of circumstances, such as a confined pigeon hide, secreted around a flight pond or around the cages of your average Sunday morning clay shoot.

Physically the drops at comb and heel of 1113/32-inches and 2¼-inches combined with a 14 5/8-inch length of pull to the 7lbs break trigger, along with the Neo’s solid, well-constructed feel add up to a semi-auto that just simply feels right the moment you pick it up. Drop in the first shell and the bolt slams into battery with a satisfying clang, the second and third rounds clicking confidently into place within the mag tube, in my case all 28g Eley VIP Sporting.

Two stands later and the Neo was proving its worth and abilities, good clean no-nonsense kills, the clays smoking into small clouds of dust, the ¼ choke throwing a consistent, well-distributed pattern. The gun mounts easily, swings smoothly, is well-weighted and balanced so ensuring controlled, even movement of both gun and shooter whilst the inertia action is crisp and efficient. Changing over to ½ choke and a box of Eley Pigeon load and quite a few of Huntroyde’s late evening crows suffered the same fate as the clays, the ease of using the Neo instilling confidence and negating overly hurried shooting.

Similarly, a brief test loading up with even more powerful Eleys all the way up to 42g failed to upset the gun’s composure and equilibrium, only a mild increase in recoil indicative of larger, more powerful cartridges.

In looks, build, quality and handling you wouldn’t be at all surprised to learn that ATA’s Neo Synthetic Green retails for well over a grand. What will surprise you is that this 12g semi is all yours for just £649, surprise you to the degree you’ll check the price tag to make sure you’ve read it right. Granted, Turkish-built shotguns, especially semi-automatics, are as a rule at least half the price of the Italian guns on which they’re based around if not less. But in the case of ATA’s Neo once you’ve, examined, handled and shot one you’d be more than prepared to pay more.

All of this basically boils down to the fact that it’s all been worth the wait for ATA to make its way onto the UK market. Equally, the wait it now transpires has been for all of the right reasons, and apart from my own personal liking for a little tighter grip, I’d be more than happy to see a Neo Synthetic Green living in my cabinet as the all-rounder I’d reach for on each and every occasion. Apart from the aforementioned attributes, the Neo has an ease about it that only a small number of shotguns possess, a feel that tells you the gun you’re holding is a proper piece of kit.