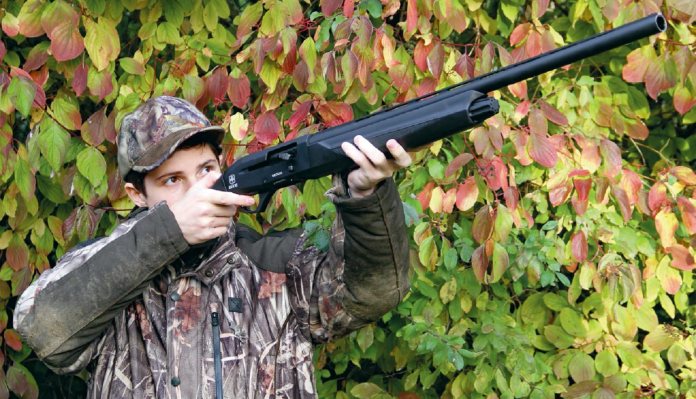 ATA, distributed by the Sportsman Gun Centre, made a big impression when their range of overand- under shotguns hit the market several years ago. Their design, build quality and features far surpassed the price tag, making them the bargain of the century.

Based in Turkey, ATA were the first to produce a Turkish semiautomatic shotgun, which they called the Vursan. Today, this Venza model has served the company well and we have a Game version with a nice and short 26” barrel on test. It is a gasoperated semi with a black synthetic stock, although walnut and laminated versions are available, as well as full camo-clad guns. There is even a nice 20-gauge. Barrel lengths include 26, 28 and 30”. You also have a full complement of five chokes and a very good handbook, which is unusual these days. Priced at only £464.99, it has got to be a surefire win. Let’s see.

The Venza is a finelooking semi-auto with good angular lines, which I prefer to more rounded models. Plus, it is slim and instantly pointable in the aim. I like short barrels, as I tend to use shotguns for close-quarter vermin, so the fast handling and the reduced chance of entanglement in foliage that a shorter barrel affords is preferable to me. The overall length is 46.25” and this 26” barrelled version weighs 3.4kg. This heft is distributed very well and when unloaded the balance point sits at the forend/action union. When loaded, the balance point moves slightly forwards.

The black polymer stock is moulded in two halves and then cemented together. It is dense inside, so there is no hollow resonance noise. Dimensionally, it possesses very little cast, with a length of pull of 14.5”, which is good for a semi, although ATA supplies 5mm spacers to alter the length to suit you. You also get cast and comb height adjustment wedges that fit between the stock and the action. Basically, if you can’t make this Venza fit, then you’re an alien!

The forend is similarly made of polymer. It’s nice and slim, with a top scalloped section for additional finger grip. Both stock parts have a soft touch/grippy coating, with slightly raised panels of stippling for additional grip. These work when wet or cold.

The buttstock also has a defined cheekpiece section, with a slightly coarser soft-touch material. In the aim, it was instantly on line with the game and my head was positioned correctly so that I could look flat down the rib section. This is also partly due to the way the action is profiled, with very angular sides and a flat angled rear section with a deep groove that leads into the rib. It just centres the eye in. Very clever.

The action is made from high-grade aluminium and it shows a good satin anodized black finish, but you have no provision for sight attachment.

The trigger guard is polymer, so will not rust and the entire group can be dropped by removing only one pin, making cleaning very simple. The slim trigger has a pull that was pleasantly light for a semi, at 5.35lbs. The safety catch is a small triangular crossbolt and therefore, pretty standard. It’s positioned behind the trigger, in the guard, and can be reversed for left-handers. How very handy!

There is also a small lever to the front/left of the trigger that drops down from the action. It is a magazine cut-off catch that allows the swift unloading and changing of cartridge type out in the field. If you look towards the lower/right of the action, you will find the bolt release catch.

Internally, the action parts show very little sign of any tool marks and are well-finished as well as polished. They all feel slick to operate. The bolt is blued and is a non-rotating design with a single claw extractor and an inner, action-mounted ejector spur. The bolt is manipulated via a small, black, curved handle.

Being a gas-operated system, the bolt carrier is connected to the gas piston coupling via a single metal bar, and the system uses what ATA calls a ‘Gas Pressure Control System’ or GPCS. In short, this is a dual operating system, where high-pressure rounds or lighter 24-gram loads are equally optimised to operate the bolt reliably.

The barrel now gets a look at and there are three lengths to choose from when it comes to the Venza. The test gun came with a 26” tube and all options show a 3” chamber. As stated earlier, I like the reduced length as it works well for me, even when a shotgun sound moderator is fitted.

The shotgun comes supplied with 5x 2 ¾” blued steel chokes that fit slightly seated in the muzzle. They have clear size markings on the outer rim and details of steel or lead compatibility to the sides. They screw in and out effortlessly with the supplied and very comfortable, choke key. The internal choke surface is uniform and very smooth.

The barrel itself has a tough, matte, but smooth, blued steel finish, which is visually nice to look at but also very hunter-friendly, deterring reflections off the surface. The rib is 7mm wide for its full length, with a serrated top and a single red dayglo element to the front. It fits to the action very snuggly. The rear section, where the bolt locks into, is polished and blued for smooth operation and easier cleaning too. All in all, a fully sorted and very pleasing semi-auto to handle and shoot.

Most semi-autos need a little running in to get them functioning 100%, but this Venza fed, fired and ejected without issue, straight from the off. I tried some 21-gram loads but they were too light, as expected. However, they only just failed to eject fully. Basically, a 24- gram load is as light as you can go.

Despite its shorter barrel length, I found driving the barrel and aiming through the target no problem. The action is quick but not ultra-fast and it was reliable with all the ammunition tested, apart from one sticky steel load. The problem was caused by the tight rim of the case, not the Venza. You do notice the lack of recoil and the very straight, back-and-down recoil characteristics of the Venza. It is kind to the shoulder and cheek alike.

I fitted the ½ choke and the first cartridge to be used on the pattern boards was the Gamebore Clear Pigeon. With its 70mm casing and payload of 30-grams of No.6 shot, it provided a good blend of weight and dense patterns. As an all-rounder cartridge, it did well on the pattern boards, and we had a total of 188 pellet strikes, with 59 in the inner sector and the remaining 129 evenly spread over 30”. Loading and ejection were swift, plus the recoil was very easy on the shoulder, allowing a second shot with minimal eye-line disturbance.

A dependable steel loading from Hull comes in the form of Steel Game. It shows a 32-gram loading of No.4 pellets in a 70mm case. A total of 124 strikes were distributed, with 51 inner hits and 73 outers, with no clumping or holes in the pattern. The amount of recoil was fine too.

Another good pigeon/vermin 12-gauge load is the Pigeon Extreme, with either plastic or fibre wadding. We had the fibre version and it was very mild on the shoulder as well as smooth to shoot from the Venza. 50 pellets struck the 15” inner sector and 138 pellets were found in the outer 30”, giving a total of 188 pellets on the board. Again, good overall coverage, which is what you want, and it was distributed with good centre and fringe hits, so it will be more effective and lethal.

How much!? This is not just a stack ‘em high and sell ‘em cheap semiauto, as a lot of thought has gone into the design and the execution. This Venza, with its shorter tube, handled very well for me and shot some great patterns, so enough said really.