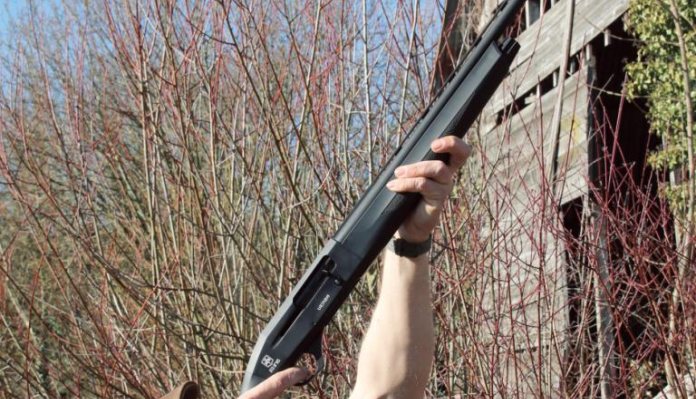 In November of 2017 I had the ATA Venza 12-gauge semi-auto on test from Sportsman Gun Centre; as some of you may remember, I was very impressed and, when one considered the price, it represented remarkable value for money. Then, on the morning of February 1st at 05.30, I was unfortunate enough to receive a broadside from a car whilst on my quad. I was lucky and walked away with bumps and a lovely bruise in the shape of the car’s grill on my right thigh.

This was as the game shooting season ended, and I was starting to get ready for the annual hare shoot and laying plans for pest control. The thought of using a heavily recoiling 12-gauge did nothing for me, so I quickly started looking at a cost-effective, 20-gauge semi. Having already used the ATA Venza in 12-gauge and, if available in the smaller calibre, was already at the top of my list and so I got one.

The model in question is the Venza Synthetic Game, which is currently the only ATA 20-gauge available, although I believe plans are in motion to manufacture other models of semi and hopefully an over and under too. It is a 3-shot semi with 28-inches barrel and supplied with a set of five chokes; from Full to Improved Cylinder, Full and ¾ are not steel-proofed, but the rest are, as ever I just went straight in with ½ as this always seems to work for me! They are all 70mm long, which should give a better pattern.

The length of pull (LOP) is 14-inches and there are two extra spacers with longer screws provided to give an additional 3/8-inches, also shims to adjustment cast and comb height. As I have now come to expect from ATA, everything is well thought out, even down to the plastic slip bearing the makers name that goes on the barrel when the gun is in the rack at a gun shop, so no glue residue to mutter about. The rib is 7mm wide, vented and finished with a red, high visibility bead.

This 20-bore weighs in at 7lbs and the balance is superb, with the point of balance being where the barrel and action meet. This is a very pointable gun and, when the LOP is correct, comes to the shoulder with ease and points naturally. This quick target acquisition is down to the ‘angular body’ design, which helps to bring the bead immediately in front of the eye, meaning the shooter can focus on the target more quickly with less distractions.

The finish is matt black, and the furniture has a rubbery feel, which offers a grippy surface to maintain a secure hold, especially when hands are wet, cold or muddy. The Venza uses ATA’s patented Gas Pressure Control System (GPCS) which allows the user to fire any loads with no loss of function and only minimal recoil. The GPCS works by integrating short recoil and gas operation, this means that when high pressure cartridges are fired the barrel and all the moving parts move backwards by opening the gas discharge holes. This in turn allows the pressurised gas to flow to the gas chamber through the barrel and exit from the discharge holes located at the forend, which means recoil is reduced and there is consequently less muzzle flip giving faster target acquisition for the follow up shot.

If lower pressure cartridges are used, the barrel does not move backwards but the pressurised gas that flows to the chamber pushes back the plunger, which then cycles the working parts. All of this is explained in great detail in the instruction book and accompanied by excellent colour photographs. As with the 12-gauge I tested, this system really does work.

The bolt is made from a steel alloy and then hard chromed and the receiver is CNC-machined from a single block of aircraft aluminium alloy to help with weight reduction. One of the features I really like with the Venza, that would not normally be associated with a more modestly priced semi auto, is the ability to unload the chambered cartridge without having to do a complete unload of the full magazine. The only niggle I have is that the bolt handle is a little small and could be slightly better finished, as it does feel a little sharp in use. The safety is located to the rear of the trigger guard and in keeping with the scale of the gun. Trigger pull was positive and not too heavy with no creep, which remains the case a year later.

I have been using the Venza for just over a year, so had plenty of time to give it a lot of use. Firstly, it did what I bought it for, which was to give me a lighter weight gun to use for work and performed the task well. I have put a wide range of cartridges and loads through it, these ranged from 32g semi magnums to some modest 21g clay pigeon loads. With the exception of one brand, everything cycled well, recoil was noticeable but not uncomfortably so in the semi magnums and barely noticeable with the light loads.

The ATA range carries a two-year warranty and all of their guns are modestly priced, ranging from £440 to nearly £600 depending on the model, the test gun currently retails for £439.99. The truth is if this was made anywhere other than Turkey, it would doubtless cost in the £800 - £1200 bracket. There is nothing not to like about ATA shotguns, or if there is, I’ve yet to find it. Hopefully they will be making all guns in everything from .410 through to 12-gauge, when that day arrives they will doubtless be a player the likes of which they could not have imagined from their humble beginning. With ATA’s mantra of affordable quality, everyone else needs to look out.