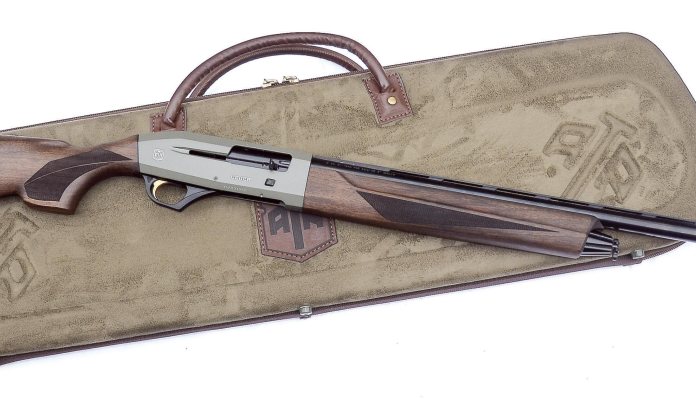 Imagine my delight when Wildhunter’s Paul Bant asked if I’d like to be the first to try out the new ATA Venza. The first of the Turkish manufacturer’s gas driven semi-autos to arrive in the UK, past experience with their inertia powered Neo semi-autos had already left me more than impressed. The thing that sets the ATA range of shotguns apart is the build quality – these guns cost a few quid more than their rivals but they are well worth the extra.

Collecting the Venza from my nearby TA dealer, T&JJ McAvoy’s (01257 426 129), the first thing that hits you is ATA’s attention to detail and how the gun is presented. Most budgetorientated shotguns, especially those from Turkey, arrive in a functional plastic travelling case. Not so the Venza, the semi-rigid zipped case is beige suede and embossed with the company’s logo. Lined with ballistic foam cut out to accommodate the gun and the small choke case, this accessory verges on designer luggage, something you actually want people to see you carrying.

Whilst this might not seem much too some people, especially since most semis once assembled tend never to see their cases again, the Venza will tempt you to transport the gun correctly – the case a piece of kit you’ll actually want to use and something that proves you’ve bought a shotgun that the makers have spent time getting right.

Choice wise, whilst all the Venza shotguns are essentially the same beneath the skin, the variations are quite remarkable. If you opt for the standard walnut furniture gun you can then select from bronze, green, black or grey coloured receivers. If not, what about the Fonex version that comes with a black receiver and synthetic stock and forend with walnut effect or maybe the all black synthetic or even the Max5 camo. There’s also a slug version but it’s doubtful that this one will ever make it to the UK.

The gun on test is, as you can see, the green version, although if it was my own personal shotgun I’d opt for the elegant bronze hue. Personal likes aside, on opening the case the first thing to greet you is the quality of the walnut. Oil-finished with a neat rubber recoil pad, aside from the straight grain, neat checkering, fit and finish, as the light catches it you start to see the subtle scallops that taper down from the comb along with the gently squared profile of the grip. Move forward and besides the elongated finger grooves that run along both sides of the forend, there’s a pronounced lip extending over the mag cap.

Look a little closer and you’ll see a neat row of small holes that run around the end of the mag cap and that correspond to those beneath the lip. Reason being, it’s from these perforations that the excess gasses escape but more of this later. The two extended tapering panels of checkering echoes the pattern of the grip, both well-defined, comfortable and as distinctive as the rest of this unusual 12g.

Buyers will have two barrel lengths to choose from, namely a 28 inch tube and the ultraquick 26 inch as tested. Gloss black with a low vented 7mm rib, an extended orange bead sits above a gently flared muzzle, the expansion of the tube to accommodate ATA’s full set of five long, flush-fit choke tubes. Moving rearwards, the rib slopes gently down as it approaches the receiver whilst internally, a long barrel extension protrudes from the three inch chamber.

Irrespective of the colour you finally opt for, the style and individual look of the anodisedfinished receiver comes not from the decoration of which there is none but from the profile. ‘Angular’ is the best way to describe it, the top and shoulders squared off, curvature noticeably dispensed with. A long bolt handle extends from the right-hand side as does the square bolt release whilst the short but efficient loading gate sits to the front of the polymer trigger guard. Surrounding a goldplated but non-adjustable trigger, the familiar cross-bolt safety sits in the rear span whilst the short bolt-lock lever is located out of the way on the left-hand side.

Whilst you and those around you are enjoying the Venza’s distinct looks, it’s what you can see when the forend’s in place that sets this ATA apart. Based around what ATA call their Gas Pressure Control System, the valve looks remarkably smaller than those on similar shotguns, the length actually making it larger. Suspended from the barrel, the valve locates within the usual housing, twin but smaller vents allowing the gas to bleed into the cyclic system in the usual way.

Since the amount of gas generated by various load sizes differs, ATA’s system recognises these variations and alters things accordingly, the single slide only running the distance it needs to. It’s here where the forend and mag cap vents come into play, the excess gasses venting in parallel to the gun which in turn helps reduce muzzle flip, speeding up your second or third shots. A cursory first glance and the Venza gas system looks unusual, but once you study it and better still use it, it starts to make good sense as does the fact it helps the gun stay cleaner.

Physically the Venza should fit most shooters, whilst the 26 inch barrel gives the gun a purposeful, do-anything feel. The overall length and weight are 46½ inches and 7lbs 3oz whilst the vital measurements of drops at comb, heel and length of pull are 1 5/16 inches, 2 5/16 inches and 14 9/16 inches, the overriding feature being the sixteenths; although if I was ATA I’d be trying to lighten the 7lbs 2oz trigger. Smooth, crisp and predictable, it is a fraction heavy, a pound lighter and it would be far more in keeping with the rest of the gun. That said, within a couple of shots, you tend to forget about it since subconsciously it becomes the norm.

First on the testing agenda were 50 sporting clays which meant ¼ choke and a goodly supply of 28g Eley VIP Sporting shells; the efficiency of the Venza was immediate. Drop a live round into the ejection port, depress the release and the bolt slams into battery with a secure sensation whilst the second round clicks firmly in to place. With the first pair of clays flying, the sensation is of a semi that is short, sharp and snappy, the short barrel’s muzzle onto the bird in an instant, the reaction of the gun quicker than the person holding it.

Perceived recoil is almost non-existent, the whole process more or less over before it’s begun. Physically, with such a compact 12g, mounting is precise, the Venza’s balance point directly below the point where the bolt and chamber come together, meaning weight and handling are more or less neutral. As a fan of short barrelled shotguns if the format has any form of negative it’s the fact you have to drive them along, the squat barrel insufficient in length or weight to be able to maintain any momentum. The upside is that the Venza flicks from target to target within an instant.

Tightening the choke to ½ and upping the load size to 30g Eley Pigeon, a couple of late afternoon outings on Huntroyde’s resident crows and fast breeding grey squirrels confirmed that the Venza is a cracking little hunting weapon. Load up with three shots and before the rest of the corvids can react to the sound of the first shot, two more have been brought rapidly to book. Likewise, fast departing squirrels don’t (from their perspective) depart quite as fast as would be prudent, the Venza on them in a flash. It’s the speed that impresses since, as we all know, not every first shot connects. But as ATA’s new gun has been designed to work as closely with the shooter as it currently gets, getting the muzzle back on track and tagging on that extra bit of lead is a matter of milliseconds.

The first time you shoot ATA’s Venza it definitely feels different. Solid with a weight that, to a degree, reminds you of an over-under, ability to move and an inane pointability wrapped up in a distinct, usable package. A semi-auto 12-bore that from the moment you hold it demands to be used; the Venza embodies an almost physical sensation of purpose.

Once this 12g hits all the dealers’ shelves it will, in my opinion, hurriedly develop an enthusiastic following. The Venza’s other main appeal is the price; as tested, irrespective of the receiver’s colour, you’ll pay around £689, whilst the synthetic models cost £669 for the Camo Max5 or £615 for the all-black synthetic. It’s taken a while for ATA’s shotguns to arrive here in the UK but as the saying goes, it’s been well worth the wait. In comparison to the rest, this Turkish manufacturer has a slightly different, allencompassing ethos, something you definitely appreciate the moment you hold any of their shotguns, especially the all new Venza.