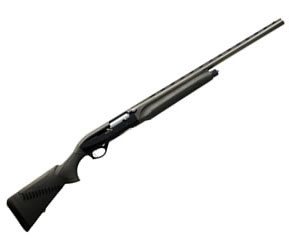 Funny things, names. Take Benelli, there’s the dramatic machismo of the “Super Black Eagle”, the military rationalism of the “M1”, “M2”, “M3” and “M4” and the aristocratic grandeur of the “Duca di Montefeltro”, and now… the “Comfort”, a name redolent of slippers and Ovaltine. But it’s Benelli we’re dealing with here, the makers of the fastest, most reliable and most ingenious semi-auto shotguns on the planet, so maybe that name isn’t as barmy as it seems.

After all, do we want our shotguns to hurt us? At some time or other we’ve all come home from a big day on the pigeons, whether clay or feathered, with a numb shoulder or a tender cheekbone, but we probably feel that it comes with the territory, even that it confers a certain machismo. Well, the designers of the Comfort evidently feel that real satisfaction and success lie in hitting targets rather than in letting our shotguns beat us up, and it’s an attitude that has made the Comfort the mildest-shooting 12-bore I’ve ever handled.

It’s All in the Stock

The action and barrel are standard, which is to say they’re the same as those on the latest Montefeltro series guns… and very good they are too, but more on that later, because the really special thing about the Comfort is its synthetic stock and fore end. Synthetic stocks are nothing new, of course, but this one really is different. To begin with it’s made of a particularly tactile graphite grey composite, which is made all the more grippy by the panels of chequering moulded into the pistol grip and the underside of the forend. Benelli call their chequering design AirTouch and it certainly feels different, more like stippling than chequering, and it works as well in the wet as in the dry, what’s more, when you want to grip it, it grips, but when you want to slide your forward hand over it, it slides. Clever.

Benelli’s Tecnopolymer composite can also be moulded into complex forms that are impossible with wood. I own a Benelli Super 90 Mancino, and it has one of the nicest, slimmest forends around, yet the Comfort’s – which is interchangeable with the Super 90’s – makes it feel decidedly plump. Surprisingly, on closer inspection, the Comfort’s forend turns out to be wider in the beam but, thanks to a radically radiused section, slimmer above it, so there’s plenty to fill your palm, whilst the long, scooped groove gives your fingers somewhere to go and something to hold on to.

Back at the butt end, the pistol grip is slimmer and more rounded than before and features both a slight palm swell and bit of a flare at the foot, but it’s in the butt itself where the innovations are most striking. To begin with, the butt pad is made of a tough gel-filled composite (think bike saddles) shaped to make the most of the contours of your shoulder, both as regards grip and, just as importantly, to dissipate recoil energy evenly across a broad area of contact. V-shaped grooves moulded into the pad provide additional grip and the pad simply clips into the rear of the stock, avoiding the need for rigid components such as screws and making it easy to remove for cleaning.

The same gel (originally developed for medical purposes) is used for the comb too, though this is firmer than the butt pad. The idea is that the gel cushions your cheek whilst the slippery texture if the comb allows your cheek to slide along its surface as the gun recoils. The standard pad is 20mm thick, but 25 and 35mm pads are also available if a longer length of pull is required.

More radical still is the structure of the butt itself. A line of twelve chevron-shaped cutouts run diagonally from the heel to just behind the pistol grip, each plugged with a synthetic recoil-absorbing insert. The idea seems to be that the recoil energy is first absorbed and then diverted along this line; simultaneously reducing felt recoil and muzzle flip.

I naturally wanted to see how the Comfort shot compared to my walnut-stocked S90. Both guns have virtually identical dimensions and weigh almost the same, the S90 being 4oz heavier than the Comfort’s modest 6lb 10oz. I was even able to match the drop and cast of the Comfort’s stock to the Mancino’s, despite the fact that the Comfort is a r/h gun and the Mancino a proper left-hander, because Benellis come with a set of shims for this purpose. It’s an easy job too, so in less than 10 minutes the Comfort was adjusted and ready to shoot. The only thing I couldn’t do was fit the Comfort with a l/h butt pad. Benelli’s American web site shows left as well as right-hand pads, and the Italian site lists them as spare parts, but Benelli’s UK distributors Beechwood Equipment, who supplied the test gun, tell me that since the ComforTech system is only available on r/h guns here, they don’t have any l/h pads.

Does the ComforTech System Work?

The first time I fired the Comfort (shooting it for pattern at a paper target) I thought there must be something wrong with my cartridges, but on inspecting the target the pattern proved to be even and well centered. Sure enough, switching to the Mancino with the same cartridges produced the same result downrange, but the gun, which I’ve always regards as a mild kicker, suddenly seemed a bit more fierce than usual.

After switching between the two a few times it was clear that the Comfort has distinct advantages over the standard Benelli – itself a pretty controllable gun – as regards both recoil and muzzle flip. The only problem was the r/h butt pad, which tended to slip sideways when pressed into the left shoulder, but I imagine it would fit a right-hander just fine. Out in the field, the Comfort’s mild manners made it really easy to forget about the gun and concentrate on the target, and it was noticeably easier to get back on target for a second shot when necessary.

I had the perfect opportunity to test this when a fox stalked up along the hedgerow towards my hide when I was out crow shooting. As I had neglected to bring any BBs, I let him get inside 20m, stopped him with a squeak, and then gave him all 3 #5 cartridges from the full-choked barrel as fast as I could pull the trigger. The fox dropped on the spot and the front bead stayed bang on his chest from start to finish. Overkill perhaps, but a convincing demonstration of the Comfort’s speed and controllability nonetheless.

Now that we’ve dealt with the particular advantages of the Comfort, it’s worth saying a bit about the features the gun shares with others in the Benelli range. First, there’s the inertia recoil system, which harnesses the recoil energy of the cartridge to unlock the bolt and blow it back far enough to eject the empty case and reset the trigger. After that, a return spring, housed in a cylinder in the butt that doubles as a stock bolt, pushes the bolt forward, picking up the next shell from the carrier and locking it into the chamber. All of this is done by way of cams and springs and without tapping off the expanding gasses in the barrel. The result is a very fast system that automatically adjusts for light or heavy loads and is supremely easy to clean. The absence of a gas system also makes the guns lighter and allows for a slimmer fore end.

The Comfort’s action is made from aluminium alloy, and except for the logo it is essentially as per the latest Montefeltro guns, recently restyled for a more streamlined look. Thus on either side of the receiver there are shallow blade-shaped grooves, and the lower rear of the receiver tapers in towards the trigger guard. This is made of a black synthetic material, and has a generous oval aperture housing a curved, convex-faced trigger with a polished silver finish, whilst the rear has a concave profile that keeps the guard well away from your middle finger.

The cross-bolt safety is mounted in the rear of the trigger guard. The right-hand end takes the form of a large triangular button whilst the left-hand end is circular, so it’s simple to find and easy to tell “safe” from “fire” by touch alone, although the round end also shows a red ring when the safety is set to “fire”. The safety can also be easily reversed for left-hand use. My only gripe about the action has to do with the u-shaped cutaway in the end of the shell lifter, since whatever benefits this feature may be designed to give are for me greatly outweighed by its tendency to catch my thumb when reloading.

The magazine tube is fitted with a bright red follower and can be unscrewed and disassembled for cleaning, consequently it is factory crimped to limit it to the standard Section-2 allowance of 2 rounds.

The Comfort will accept any barrel designed for the Raffaello/Montefeltro but the test gun came fitted with a 26” Varichoke model, chambered for 3” cartridges and suitable for use with steel shot. Five chromed choke tubes are supplied: Full, Improved Modified (i.e. three-quarter), Modified (half), Improved Cylinder (quarter) and Skeet (UK Improved Cylinder). The ventilated rib is 5/16” wide and at the muzzle there is a red fibre-optic sight. The sighting plane is cut with fine transverse arcs to minimise reflection and is extended along the top of the receiver for 6.5” by a grooved channel the width of the rib, which finishes in a diamond-shaped scoop that presents a dark triangle to the eye when the gun is mounted. The sight picture is therefore positive but uncluttered, the more so because the curved upper surfaces of the receiver and barrel, which have a black satin finish, reflect the sky and so pass unnoticed.

Benelli hammer forge their barrels, and on some models they follow this up by freezing them to –300° F to relieve stresses left over from the forging process. The result, they claim, is that these CrioTech barrels are more consistent, and the bore smoother, thereby offering less resistance to the wad and the shot and staying cleaner. The Comfort’s barrel isn’t treated in this way, but patterns were satisfyingly even and the bore was surprisingly clean at the end of each outing nevertheless.

The Comfort comes in a grey plastic hard case, a modern version of the old leg-o-mutton format, and as well as the interchangeable chokes and the stock shims you get a choke key, a set of QD sling swivels and a bottle of Benelli MF-82 lubricant.

All in all, I think it’s an excellent package. The Comfort really deserves to be a success in its own right, but I hope that shooters in the UK and European markets can look forward to seeing its recoil-reducing technology made available across the Benelli range, as is already the case in the USA. Finally, my thanks go to Beechwood for providing the test gun and to Roger Bill at Shooting Supplies of Bromsgrove for his assistance with this test.