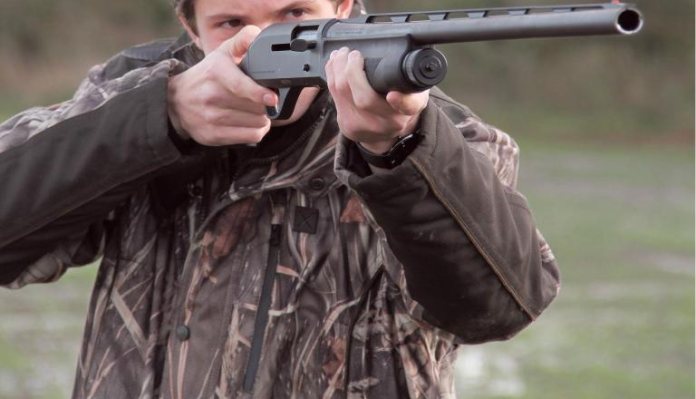 I am a big fan of the Benelli M2 semi-auto shotgun. Not only are they a great looking and well-made 12-gauge but they have superb handling and unrivalled reliability. Benellis are a premium brand and as such are a little more expensive than some autos, but it shows in the performance and longevity. But, like so many other rifle, shotgun and scope makers, there has been a trend to entice new or existing customers to buy an entrylevel gun at a competitive price. Enter the M1 Model 90. The M2 runs at a retail price of £1445, whilst the M1 is only £1045 and this is achieved with less options i.e. barrel lengths, three chokes instead of five, matt black action, no left-hand option and redesigned stock. But underneath is still the superb mechanics of an inertia type reliable 12g semi.

To me, its design is not only focused on a new Benelli shooter but an existing Benelli owner that does not want to scratch their pride and joy, walnut-stocked beauty and want an honest pigeon or rough shooters semi auto shotgun.

The tough polymer Tec stock is available as a black option only at present and has an overall hard plastic texture to it, yet feels solid and not too echoey in the moulded rear section. There is no palm swell and the cast is pretty straight, but you do have a selection of wedge type cast adjusters supplied, so one can adjust the M1 to suit your body frame and eye alignment as you wish.

The moulded in chequering is actually quite good for a change and does grip the hands or gloves and the recoil pad is a large, black ventilated piece that works very well in the field tests.

The forend is short; the M1 being an inertia not a gas operated semi-automatic. However, the profile is really good, as it has a deep, recessed finger groove running along the top edge and the base of the forend swells to support the palm and has chequering to both sides. It gives you quite a deliberate hold and is closer to the action, which helps keep the M1 in the shoulder better and make sure that the inertia system operates to its best.

This is the uncomplicated inertia system that uses the energy from a fired round to cycle the action. Due to the fewer moving parts, the forend is often shorter and slimmer and there is less to go wrong, but it does need a good load to operate 100%, see the field test.

This Benelli, like other Benellis, use the twin locking head to the bolt system, where the two large locking lugs up front are rotated to lock and unlock the bolt from the extended barrel chamber. The M1 uses the delayed recoil locking system, where, as the gun is fired, it tightens the bolt into the barrel until the stored energy from the spring within the bolt now compresses and, when the recoil reduces a tad, the stored energy within the bolt spring thus opens the bolt and the spent case is ejected.

Extraction is via a single hardened claw extractor on the rotating bolts head, which was very positive in use with all the loads tested. Ejection is similarly brisk, with a hardened sprung plunger set into the left side wall of the barrel extension and can be replaced, if required, by drifting out two pins.

The action itself has a matt black, hard-anodised finish but there are no scope mounts or tapped holes for a scope fitment and the bolt itself is smooth, blued finish. The bolt handle is small and curved with a serrated surface but is fine on a sporter semi.

There is the typical holdopen on the last round and the bolt can then be released by a small button below the ejection port and the slim, black, smooth trigger breaks cleanly and there is a triangular shaped cross bolt safety set into the trigger guard behind the trigger. The loading port uses a ventilated lifter with a red anodised mag plunger; nice and simple, with easy access and smooth operation.

You have a 28-inch barrelled option only with a multi choke system from Benelli and has three instead of five chokes of the M2 system. Here, the M1 has ¼, ½ and full options, three inches long and I fitted the ½ choke, due to the steel shot pattern tests later. I really like the choke key, as it has a large handle and twin supports that support the choke as you unscrew it from the barrel.

Overall finish is a tough, satin blue that compliments the action nicely and is marked ‘Made in Italy, 12-gauge, 3-inch 76mm’. The rib is typical Benelli and has a slightly raised look and reducing height to the muzzle of seven vents beneath. It is 7.5mm wide and has a serrated finish and a single red Day-Glo bead for sighting.

There is a big sticker on the side of the Benelli stating “use only 32-gram minimum shot weight” in the M1. This is due to the inertia action that requires, like all inertia systems, a decent amount of rearward forces to operate the recoil operating system. Often, you will find on an inertia semi auto that, if you do not have it snug in the shoulder, then the rearward force has nothing to work against and it won’t cycle the action correctly.

32-grams is quite heavy really; so, I decided in the interest of us all to test a few 28- and 30- gram loads too, in the shoulder and with a sloppy hold.

I used a ½ choke, due to steel shot on some of the loadings and set the pattern boards at 30-yards. The Benelli has that reducing rib profile and any upward bias was really due to the lighter steel shot, which often happens.

First up were the Hull Steel Game, which fill the M1 brief as a wildfowl tool. These have proven to be a really good steel load and it uses a 32-gram loading of FE4 shot size in a 70mm case and plastic wadding.

I had a total of 177 pellets on the board, with 32 inner 15-inch hits and 145 outer strikes. There was a high bias and so a slightly lower aim would centre the even pattern better with this round.

Next up were the larger Hull Solway Steel. This is a 3-inch magnum loading with 36-grams of FE1 shot size and plastic wad. Firstly, I was amazed how little felt recoil there was from these heavy hitters and, in fact, were no hassle to shoot three in quick succession. The larger FE1 pellets resulted in 115 total pellet hits with 37 inner and 78 outer hits, again with a slight high overall pattern density.

I also tried an Eley Pigeon Select that used a 30-gram load of No. 6 shot with a fibre wad. This is 2-grams below the standard 32-gram minimum recommended but, under witnessed shots, the Benelli digested magazine full after magazine full, with no hang ups. I had a total of 231 of the No. 6 shot on the 30-inch board, with an even density of 100 inner and 131 outer hits, superb.

Finally, another Hull loading, the superb, fast and hard-hitting High Pheasant Extreme with a 36-gram loading of No. 4 shot with a plastic wad. These cycled very fast and were spat out rigorously from the M1. Pattern wise, I had a well centralised pattern with 104 outer hits and 58 inner strikes for a total of 162. A really nice hard-hitting load, this one. Shooting off the shoulder a tad, i.e. like a contorted shot from a duck or pigeon hide, I only had a hang up or enough to eject but not cycle a new round with the 30-gram Eleys, about two out of 20 shots. A 28-gram loading did have a couple of no goes from the shoulder in correct hold and you could feel the more sluggish action. So, yes, 30-grams are probably okay but 32-grams and above 100% reliable, as stated by Benelli.

What does a grand buy you these days? A really good, well-bred semi-automatic from Benelli, that’s what. Yes, it does not have the grace and feel of a M2 but that is £400 more; so, an M1 at £1045 plus an extra £400 is a lot of cartridges to shoot through it. The M1 would make a really good, reliable ‘just pick it up, in the back of the truck and go’ sort of shotgun and if it gets scratched, so what. It patterned well, digest loads reliably, even lighter than recommended and won’t break the bank.