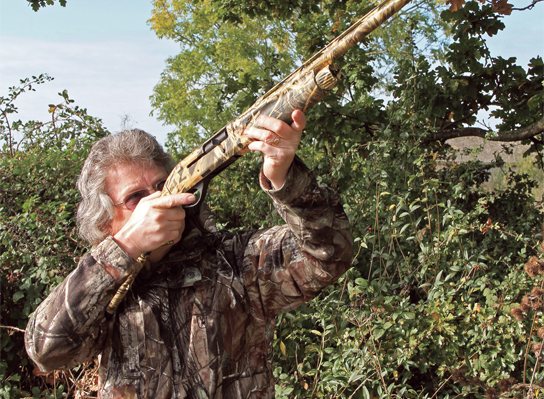 Italians are notorious for fast cars, beautiful scenery and delicious food, all clichés that, equally, equate to that of another Italian thoroughbred, the Benelli semi-auto shotgun.

There are semi-autos and then there are semi-autos, and Benelli has become synonymous with producing a large line of semis that span every conceivable application that this marquee of shotgun was designed for. They have been perceived as pricey by some, but that’s because they are not like many and the price reflects the inner as well as outward mechanics that make up this special shotgun.

They’re the best, in my view, and overall performance has to be the Benelli M2 range, incorporating the famous inertia driven system. This provides far fewer moving parts which could reduce the speed due to friction and foul-up due to dirt and, as there are no parts that actually move within the forend grip, all the magic happens within the action itself. This has several advantages, other than that of mechanics, as the forend can now be kept slim, thus aiding in handling and it weighs a lot less than many other semi auto shotguns.

I had the camo-clad version of the M2 in Max 4, which made for a very purposeful and practical semi for rough, pigeon or wildfowling. It retails for £1495 which, after the testing, I found to be a bargain quite honestly.

The inertia system is very clever and enables the Benelli to cycle swiftly, yet achieve a positive lock-up and cartridge manipulation all in the blink of an eye; very safely too. With a case in the chamber and the hammer cocked, as you press the trigger, a sequence of events happens thus: the hammer strikes the firing pin inside the bolt, that ignites the primer and case. At the same time the magazine stop is released, so a new case pops out of the tubular mag and now rests under the bolt. As the M2 recoils, the rearward thrust causes an inertia in the bolt head that locks tightly into the barrel recesses. The greater the recoil the tighter the bolts grip. As the M2 recoils, a spring within the bolt compresses, and when the recoil reduces this stored energy within the bolt spring then initiates the rearward movement of the bolt body. This disengages the bolt from the barrel and the spent case is ejected and a new cartridge fed from beneath, up into the barrel, where it sits waiting for another trigger pull to start the process over again.

What makes the Benelli M2 special is its rotary bolt design that is very slick and also very safe and reliable, providing a superbly tight lock-up yet positive feed and ejection when needed. The bolt head has two opposing lugs that sit into abutments or recesses at the barrel’s chamber end and lock at a vertical 90 degree angle on well-polished 0.5 inch bearing surfaces. Extraction is via a single, hardened claw extractor on the rotating bolts head, very positive in use. Ejection is accomplished by a sprung plunger set into the left side wall of the barrel extension and can be replaced by drifting out two pins.

This is where the inertia system wins over an exhaust gas-operated semi, as there is far less dirt and grime that could potentially foul the mechanism; but on the flip side, if your rounds are lacking in power,then operation may become less reliable. Let`s see in the field test.

There is also a small bolt release below the ejection port and the slim black trigger breaks cleanly and there is across bolt safety if needed.

Cut into the one-piece alloy receiver top there is provision for mounting a scope or red dot sight, so with a suitable choke, slug or SSG can be used.

The M2 can be supplied with either 24, 26 or 28 inch barrels with ventilated rib and all chambered for three-inch magnum cartridges. A set of five multichokes are included, as are stock adjustment shims.

I had the 28 inch barrel, which comes hammer-forged like a rifle’s barrel, and I believe they also stress-relieve the barrels to ensure uniformity in the steel`s integrity, again like a Match-grade bench-rest rifle. This is not done to increase accuracy obviously but does reduce lead and plastic deposits on the bore’s surface. This is further enhanced by the chrome-lined bores, that have three-inch chambers as standard and has a slim 7mm raised ventilated rib.

The chokes are Benelli`s own Crio type at 2.75 inches length and have a slow tapered lead in and steel shot chokes are included in the set, so handy for ducks and geese as desired.

The best part on the gun is the very well-designed stock. Again, camo-clad to match the Max4 barrel and receiver, the stock has perfect fit and function. The forend is short and slim at nine-inches length and a 1.75 inch width, which I really like, and the deep finger groove and dimpled pressedin checkering give a good grip. There is also a rotating sling swivel attachment to the large securing nut, that is very handy for a sling when trampling across a field or marshes.

The rear butt section is particularly good, the long, raked pistol grip has the same pressed in dimples and affords an unstressed grip. Between the pistol grip and receiver are plastic inserts that can adjust the comb height as desired. Length of pull is 14.25 inches.

The rest of the butt section has the ComforTech features. This includes a soft polymer pad that straddles the comb for 5.25 inches, providing a soft and comfortable cheek to gun weld. This is also reflected in the same soft recoil pad of ComforTec gel that is scalloped to sit perfectly in the shoulder and not pinch the shoulder to the right on firing. The stock is made from Benelli`s Techno polymer and has a series of 12 chevron insets from the same ComforTech material that is not just cosmetic. These chevrons, as with the stock, are designed to flex on firing and thus absorb recoil; which keeps the firing cycle comfortable and allows a much better sight picture for the second round or three.

I chose a selection of 12 gauge ammo and set to pattern the best at 30 yards to gain an insight into pellet distribution and density. I fitted the ½ choke tube for these cartridges and a ¾ for the Steel shot:

Eley Pigeon Select. 30 gram, no 6 shot, 70mm case – at 30 yards, I had 188 pellets hit the board, with 128 within the 29 inch outer circle margin and 60 within the inner 14 inch circle. That`s a great distribution of half the amount in the inner and outer. Very even distribution too, no holes with the inner four quadrants having 20, 12, 15 and 13 pellet distribution.

Gamebore Clear Pigeon. 30 grams, no 6 shot, 70mm case – another even-patterned cartridge. 192 pellets hit the board, with 138 pellets in the outer section and 54 covering the inner 14 inches.

Lyalvale Express Supreme Game. 30grams, no 5 shot, 65mm case – 160 pellets hit the board and the patterns were very good, with 63 pellets within the inner circle at 30 yards.

Lyalvale Express Pigeon Special. 29 grams, no 6 shot, 65mm case – 172 pellets hit the pattern board, with 119 in the outer and 53 in the inner but very even patterning, that left no holes for pigeons to fly through.

Eley Lightning Steel. 36 gram, no 3 shot, 76mm case – a good duck or goose load, maybe No 1s for geese, the Lightning Steel certainly hit hard. At 30 yards with the ¾ choke, I had 132 pellets hit the pattern board, with 98 in the outer quadrants and only 34 within the inner section.

Regarding handling, the Benelli is fast, which has always been its appeals; not only to pigeon shooters in hides but fowlers on the foreshore, especially in the Max4 guise. I fed the Benelli a variety of loads, weights and pellet types with total reliability and you really do notice the ComforTech inserts cushioning the recoil. The action too is very slick, no noticeable bolt travel, just a smooth firing cycle and good retained sight picture.

Some had said to me that the Benelli shoots high due to a reducing rib profile, but looking at the 30 yards shot patterns I could only see a slight upward bias at best, to me it shot where your eye looked. Yes, there are cheaper semis out there and for some they will suffice, but as soon as you pick up a Benelli you know your money is well-spent. Benelli do semis, just look at all the differing models in their range!

People who would not buy or consider a semi are often surprised how ‘un-semiautomatic’ Benellis are and after bringing home a bag full of pigeons change their minds from the o/u bias.