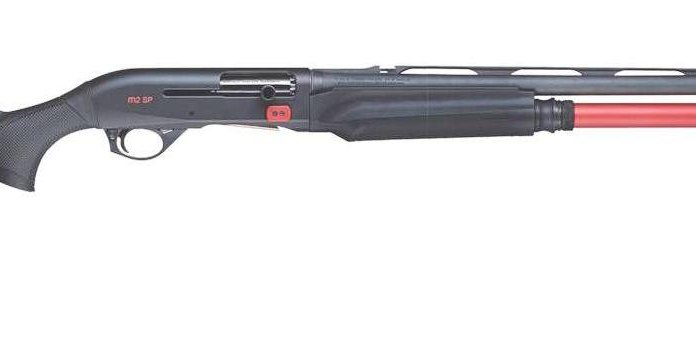 Back in 2018 when I was in Germany at the IWA show, I visited the Benelli stand and was immediately drawn to the new M2 SP shotgun. Kim Leppanen who is the world champion practical shotgun shooter happened to be there showing off this new model for Benelli. I managed to collar him and get him to tell me all about it! Seeing this shotgun at that show has kept my eyes peeled for when they finally landed here in the UK because I have been wanting to get my hands on one so bad ever since, and now I have! Now interestingly at the time of writing this I have recently tested and reviewed the new Beretta 1301 comp Pro and I have been looking forward to getting this Benelli to compare it to. It’s almost like a blue vs red scenario! But let’s concentrate on the red for now as the blue Beretta is somewhat different in a lot of ways.

Let’s take it from the top then. as you can see the SP has a few red bits on it! No, seriously, the magazine tube does look pretty funky in its anodised red. As does the extra-large bolt release button, which, of course, is a feature that is to be expected on a competition shotgun. As is the large cross bolt safety catch which is located at the rear of the trigger. The big bolt handle is ideal for those fast reloads under timed pressure on a stage and again, it is a mandatory feature on a comp gun.

Now this is where I think Benelli have missed a trick here: the loading well. Let me explain. Many old school M2 owners would eventually or almost immediately upon buying their gun, take it straight to the gunsmith to get the loading well milled out to give them more room and ease when reloading. You would think that this would be more of a standard feature now on this new model, but it isn’t unfortunately, and I think this could be a deciding factor for a shooter who wants a competition shotgun straight out of the box. Take its main competitor the Beretta 1301 comp pro for example, loading well is factory milled out, as is the Breda B12i and the Stoeger M3K. So, I will just give a little ‘sigh’ regarding this. Oh, did I mention that the shell lifter doesn’t stay down when loading either? Another M2 mod that will possibly need to be done if you are trying to shave seconds on the comp circuit! Again, the Beretta has had its done in the factory. Okay, I’m not having a gripe, I’m just thinking like a potential buyer! These are observations from a practical shooter.

Moving on to the stock and starting with the recoil pad. It is made from a very soft rubber with a textured finish to aid grip in the shoulder and is also interchangeable. The synthetic stock is ambidextrous and incorporates Benelli’s Comfortech recoil system which is tried and tested on many of their models including the Supernova pump action which is one that I own and can definitely vouch for as it’s my field gun and often gets fed some heavy loads! It’s unlike the Beretta’s recoil dampening system that uses mechanical shock absorbers, the SP’s stock is designed to flex and, well, squash a little with its rubber internal parts of which you can actual see running down either side of the stock. The pistol grip feels quite slim and has a textured finish that looks almost honeycomb-like, Benelli call it their Airtech System.

Moving on to the action and receiver, the very first thing that you notice with the SP is how glass like the feel of the action and Benelli’s Speed Bolt is when operating the bolt handle, it is so, so smooth and this sticks in my memory from my first look at this shotgun back in Germany. The receiver itself is aluminium and has M2 SP in red on the right-hand side with Benelli on the other. The forend is slim and offers good grip with the same honeycomb texture as the pistol grip. To me it feels a lot slenderer than the forend on the Beretta.

On to the 26-inch barrel, it has a high ventilated rib that is 10mm wide and has a front fibre optic sight, which I particularly like, but with an added bonus and a feature that I’ve not seen on a shotgun before: a rear pop up iron sight! Fixed sights on tactical shotguns yes, but not a pop up one! It simply flicks up with your thumb or if you aren’t using it, it just folds down below the line of the top of the rib so not to cause a distraction. So, if you are doing some slug shooting at longish range, this will certainly help matters! The barrel has a barrel clamp to secure it to the 10-round magazine, did I mention that it’s red?!

So, how did it perform at the range then? Well, very well indeed! I put all sorts of different size and power cartridges through it and it did not miss a beat. Even low recoil 28g shells just cycled with no problems. As with any inertia shotgun, pull it in nice and tight and you should not have an issue. The bonus with any inertia operated shotgun is the fact that it will run pretty clean as all the gas is going straight out of the barrel rather than some of it going into a piston to push the action back and cycle the gun. I reached out to 80-yards with some 1oz slug rounds and connected with my steel gong, and what I can say is that the pop-up rear iron sight really helped!

Overall the SP is a very easy shotgun to use as in its pointability and ease of loading. As mentioned earlier though, loading could have been made even more slick at the factory, but you can’t have everything can you?