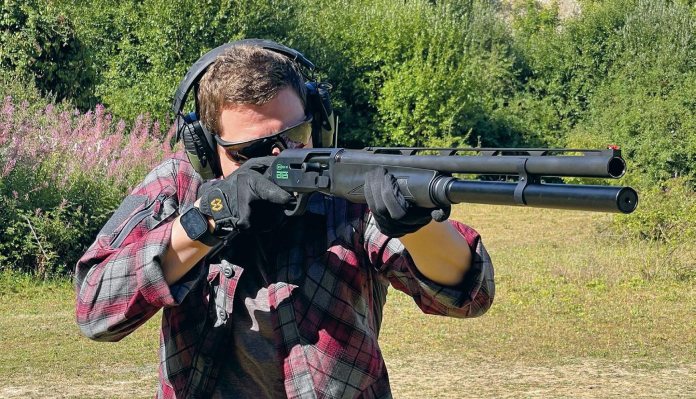 The B12i is a 12-gauge, inertiadriven shotgun that is designed to be competition ready out of the box and Viking states that it has been developed in conjunction with some of the top practical shooters in the US and UK.

Initial inspection shows that Breda has done some nice work to the gun. Specifically, the loading port, which has been enlarged at the factory for faster reloading. This is an area that shooters often attack with a Dremel, and the work nearly always looks ugly! Not here though, as Breda has managed to make it look beautifully sculpted. Well, they are Italian!

As mentioned above, this shotgun uses an inertia system instead of a gas. Basically, the former operates by using the recoil energy generated by the fired cartridge. There is a strong spring within the bolt that absorbs the recoil until it is fully compressed, by which time the shot has left the muzzle. At this point, the chromed bolt head is unlocked and thrust rearward, ejecting the spent cartridge. Finally, a spring within the butt forces the bolt forwards again to pick up and chamber a new cartridge.

The system consists of very few components and crucially does not use or come into contact with any of the dirty gases produced by the cartridge. Not only does this mean that there is no build-up of carbon within the mechanism, making the system incredibly reliable, but it also means there is very little cleaning to do! Also, the lack of gas parts means less weight and potentially better handling. Nice!

There are a few disadvantages, however. The first is that gas-operated semi-autos provide significantly more recoil reduction than inertia-driven guns. So, if you plan on shooting a lot of cartridges, including heavy ones, then a gas gun could be your best bet. Also, it’s worth bearing in mind that the system will not function reliably with really light, 21-gram loads.

As with all things, it comes down to user preference, what weight cartridges will be used and what the gun will be used for!

The bolt is housed in a beautifully made aluminium-alloy receiver with a matte black anodized finish. Each side shows some distinctive, large green text that shouts the model’s name. Up top, you will find 5x threaded holes that can be used to attach a Picatinny rail. This gives the user the ability to fit a red dot sight or similar. The Breda website does show a rail that includes a ghost ring sight if that is something you need.

Look to the right-hand side and you will notice an enlarged ejection port for easy access, along with a threaded/ removable bolt handle that protrudes 1” and measures 12mm in diameter. Below this, you will find a large, 3.5x1.5cm (LxH) serrated paddle-type bolt release. These enlarged controls are designed to maximise the speed at which the user can find them and use them, and are common aftermarket upgrades made by shooters to standard shotguns they intend to use for practical shooting.

The trigger is well weighted (5.9lbs) and nice to operate. Behind it, there is a simple cross-bolt safety catch and in front of it is a small, silver, cut-off lever. If you load the shotgun via the magazine, with an empty chamber and the bolt forward, you can press this lever to release the first cartridge, so that when you cock the action it picks up a round from the magazine and chambers it. Alternatively, with the bolt to the rear, you can pop a cartridge in the ejection port, release the working parts forward, then bomb up the magazine.

The polymer trigger guard shows a raceway that leads on to the one found at the centre of the shell lifter. I found this helps guide the next shotgun cartridge towards the red, anodised magazine follower. As mentioned before, the loading port has been opened up, and this has been done to facilitate fast reload techniques such as dual or quad loading. Remember, practical shotgun shooting is against the clock, so anything that speeds up reloading is a bonus! The elongated shell lifter and slightly protruding mag follower help to minimise any finger pinching and during loading everything felt particularly well made, weighted and put together.

The barrel is 24” long and shows a 3” chamber. Crucially, it is proofed for steel and bears the Fleur de lys markings. Internally, the barrel is chromed and polished for maximum corrosion resistance and longevity. The gun comes with a full set of flush-fit chokes (F, IM, M, IC and CL), plus a decent choke key.

Up top, the barrel shows a ventilated, stepped, straight rib that is 10mm wide, as well as ridged, its entire length. Interestingly, at the top of the step, there is a folding rear sight for more precise aiming. The front sight is a red fibre optic element.

For me, the furniture on the B12i is a real highlight. It is manufactured using a technopolymer that consists of nylon, glass fibre and elastomer. The latter gives it all a really pleasing rubberised surface. It feels quality and is exceptionally grippy and practical. Ideal for fast-paced shooting!

Up front the forend measures 10” in length, making it just over 1” longer than a Benelli M2. For even more grip there is a panel of chequering on each side, just like the pistol grip.

The butt comes fitted with a Cervellati microcell butt pad that is nice and spongy for maximum recoil reduction. It is 0.75” thick and gives the gun a length of pull of 14”. Further protection is afforded to the shooter by the addition of a 5” soft comb insert. Also, the user can adjust the drop and cast for a better fit (spacers included). However, zero cast and the standard 60mm drop seemed to suit me nicely.

Finally, there is a moulded-in hole for a sling swivel and this pairs with the one on the forend retention cap.

As standard, the gun comes with a 4+1 capacity, but once you fit the mag extension tube (supplied), this is bumped up to a healthy 9+1 (all you need is a set of circlip pliers).

I decided to see how the Breda would perform on some sporting clays without the mag extension, to allow me to compare performance and handling against a variety of guns.

I selected a few different cartridges, starting with some Eley Select 24-gram 7.5s, which, incidentally, cycled flawlessly. I also used some Hull Superfast (28-gram / No.7.5 / Fibre) and my usual Gamebore Velocity+ (28-gram / No.8 / Fibre).

Straight off the bat, the handling was excellent, especially with the 26” barrel, as it is just so pointable. The lack of gas parts certainly helps, plus meant that there was no uncomfortable heat build-up during my intense session!

The soft-touch forend felt luxurious and was pleasing to hold, plus the extra length compared to a Benelli M2 is much appreciated. The soft recoil pad marries up with the feeling of the forend nicely.

Operation was simple and function was 100% reliable. The bolt release catch was well weighted and helped to reduce fatigue during rapid flurries. I was also pleased to see that the modified choke dealt with everything from high birds off the tower to up close rabbits. Nice!

For the next test, I did some dual and quad loads and quickly found that the changes made by Breda are spot on. The enlarged loading port makes reloading with your weak or strong hand a breeze and there are no sharp edges to get caught up on.

Moving on to shooting, I found that the recoil impulse was particularly impressive, especially with 28-gram cartridges. It was soft and allowed quick reacquisition of the target, even during rapid fire. The recoil pad was very effective and it certainly gave me the feeling that I could shoot this Breda all day!

Overall, I am impressed with B12i. The build quality is excellent and the finish on all the components is top-notch, giving the gun premium status. Performance on target was excellent and the gun popped up into my shoulder nicely. I only had one stoppage during the whole test and that was because the forend retaining cap came loose. Also, the cocking handle is threaded and tried to undo itself, but a spot of thread-lock would sort that out!