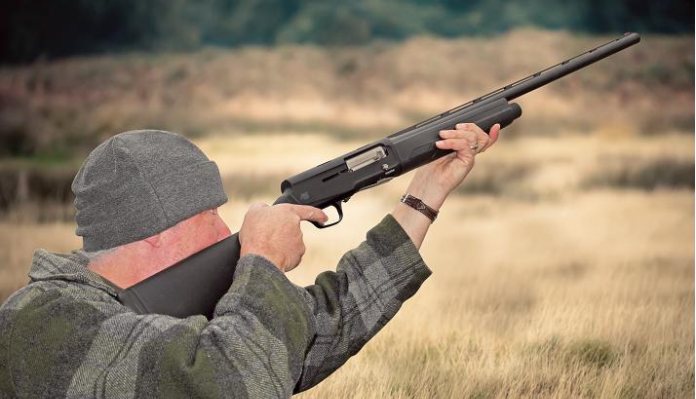 If ever there was a classic, totally recognisable shotgun, that has transcended the age from American workhorse to competition gun and then collectable, it has to be ‘Old Humpy’. In that I refer to the timeless Browning A5 semi-automatic shotgun, as for as long as I can remember it has been a shotgun design that refuses to die. Many a new shotgun has come and gone but the A5 is a really good shotgun and as such has made a fantastic revival for shotgunners who appreciate a bit of heritage and like the new-build quality and improved features. Truthfully, I am a rifleman but if I had to choose a ‘go to’ shotgun, then the A5 would be top of my list.

What I like about the A5 is the ease at which the action cycles and ejects cases with boring reliability – if it ain’t broke don’t fix it. This inertia operated cycling action does away with gas seals, ports and the like and operates on sheer inertia of the fired cartridge. This has the advantage of a simplified operating system, as well as less recoil, due to the way ‘recoil’ is bled off for action use. Browning are so confident with the new system that they offer a 100,000 or seven-year guarantee with it, now that’s impressive!

It is dubbed the ‘Kinematic drive system’, that utilities the kinetic energy from the fired case to produce a smooth and totally reliable short action operating system. Basically, Browning and the A5 were the forerunners to a kinetic system and they got it right first time; the energy of the recoil is stored within the system, to be released to eject and cycle a new round in a blink of an eye.

What I like about this system is it works for all loads, soft or hard; it works in all weather conditions and is pretty immune to bad fouling due to neglect from poorly educated owners. The actual action is made from a lightweight aluminium alloy and you really feel this, as the shotgun weighs only 3.1kg, yet it is very strong and also highly resistant to rust, especially so due to the hard anodised coating. On top you have provision for a scope mount, so certainly aimed at American slug gun hunters and turkey shooters, although I am partial to a bit of slugging myself.

The reciprocating bolt locking is very well made and gives that reassurance of a precise lock up and safety, with the locking lugs mortising into the barrel abutments; the cartridge manipulation is carried by a single claw extractor, with a positive ejection system. Locked open on cocking and a swift push of the bolt release, sited to the right of the action, closes the bolt. You also have a speed load system that allows a top up of rounds via the non-bolt opening operation.

The trigger really isn’t like that of a precision rifle, but this Browning had a good feel and broke cleanly, so you definitely knew when it was about to break, although I have to say that when freezing my what nots off after geese in Scotland, that was of no concern! Safety is via a tang mounted, straight push locking button- simple yes, but it works and is actually very conveniently placed.

At 28-inches, the barrel is ideally suited for all round use but best of all is the Invector DS choke system. This double seal (DS) choke is thinner yet longer and so has a better shot pattern characteristic with a variety of loads. Outside diameter of the barrel is reduced to compensate for the choke and the overall enhancement means a very dense and consistent shot pattern, really that’s all you are aiming for with a shotgun, no holes for game to fly through. It also has the attributes of a better swing and follow through and having shot this A5 a lot, I cannot argue with that. The Invector DS chokes have been designed to avoid holes in the pattern and also to eliminate shot distortion that can really spoil a dense even spread of shot. This is largely achieved by a new brass seal, which effectively seals against choke tightening and ensures a perfect shot pattern.

The back-bored Vector Pro barrel has the advantage that it increases the diameter of the barrel, whilst extending the connecting cone. This has many benefits. Firstly, there is an increase in speed and thus shot penetration down range. It also has less shot deformation and so shot patterns are denser and more uniform, see the field test. You feel less recoil as the shot column passes through the barrel with less restrictions, win win.

The rib is slim at 4mm and the sighting is via a single, long, Day-Glo red fibre optic foresight and when you offer up the A5 to the shoulder that hump back perfectly leads your eye straight down the receiver and barrel in a straight line; not looking up or down on it, but straight down. That is why the ‘Humpy’ has remained in production, it works, enough said.

The A5, being an iconic brand, is offered in a range of finishes to appeal to the classic shooter or the ‘just get out there and do it’ sort of chap. That’s me really, so a synthetic stocked version suited me fine. It is available in Standard grade two walnut stock or nickel-plated engraved receiver, with grade three walnut stocks and oil rubbed finish, very nice. The next level is synthetic, and as such has three options.

The standard composite is a neutral black finished synthetic stocked A5, which I had on test. It is lightweight, yet has a solid feel. Like their rifles, Browning has a good blend of real usability to the stocks, yet without compromise to integrity and function.

Next up is the A5 Camo Infinity, which uses the Mossy Oak branded camo pattern, whilst the A5 Camo Max 4, (my favourite) really breaks up the overall pattern of the A5 for hide or open field use. The forend is unusual, as it attaches to the barrel prior to attachment to the action.

Ordinarily you fit the barrel and then offer up the forend stock. The A5 just clips on to the barrel and is inserted as one, really that’s pretty good.

Me being me, I have to really test these things out in the fields and on the test pattern boards the A5, despite being such an ancient shotgun design, was still up there with the best. I had only one choke with the A5 and that was a ½ choke, with additional sizes being available for £48. So I shot a variety of cartridges to ascertain the A5’s performance down range.

Eley Pigeon Select: 30- gram, no 6 shot, 70mm case: at 30-yards I had 194 pellets hit the board, with 118 within the 29-inch outer circle margin and 64 within the inner 14- inch circle. There were no holes and really good even distribution of the shot pattern. Also the pattern was centrally placed, with no bias at all.

Gamebore Clear Pigeon: 30-grams, no 6 shot, 70mm case: 187 pellets hit the board, with 147 pellets in the outer section and 49 covering the inner 14 inches. Light recoiling and fast to get back on target, a good ‘pigeon from the hide’ load this one.

Remington Shurshot: 34-grams, no 4 shot, 70mm case: I know this is an oddball round but it seems to work rather well, although is a tad pricey. Total pellet hits were 118, with some 91 in the outer circle and 40 in the inner circle. A few open patches but always hits hard on rabbits to bring down a runner.

Eley Grand Prix: 32 grams, no 6 shot, 67mm case: Good and dense this load, with 198 pellets hitting the board, with 124 outer density spread and 75 inner circle hits with no holes. An oldie but goody, just like the A5 itself.

Lyalvale Express Pigeon Special: 29-grams, no 6 shot, 65mm case: very smooth, light recoiling and consistent load this one. It had a very good 174 pellet hit rate in the pattern board, with a further 115 pellets evenly distributed in the outer sectors. Inner circle had a good 59 pellet count, with a very even, no holes at all pattern, a very good load this one.

Eley Lightning Steel: 36- gram, no 3 shot, 76mm case: Fast at 30-yards, the shot achieved 117 pellets hitting the pattern board, with 84 in the outer quadrants and only 40 within the inner section. Certainly fast and not many voids to the pattern but a little sparsely distributed.

Gamebore Clear Pigeon: 30 grams, no 6 shot, 70mm case: as a one shot cartridge, this always pulls the hat out of the bag. 198 pellets hit the board, with 142 pellets in the outer section and 62 covering the inner 14-inches. Really dense with a no holes, even pattern from the A5, perfection.

‘Old Humpy’ might be old, but it’s a design that refuses to die, and that’s because it works. With old classic design and looks, Browning have spruced up the A5 to modern day standards, kept all its true attributes, yet improved reliability, performance, lack of recoil and consistent shot patterns. The sight picture is especially good, with a ‘straight down the rib’ sight picture and felt recoil is minimal, even with the heaviest loads.

Personally, after using the A5, it is very hard to give it back, as it fulfils all I need from a shotgun, reliable (in all weathers and with all loads – 28-grams to magnums), hard wearing (composite or camo wrapped) and very light recoiling, so even with contorted shooting positions from a hide, it does not punish you.

It’s a pick up and go shotgun, for real hunters, who are not interested in the latest trend but just want game in the bag. My only bugbear is the lack of chokes supplied with the shotgun, mind you, it saves you having chokes you will never use, probably another smart move.