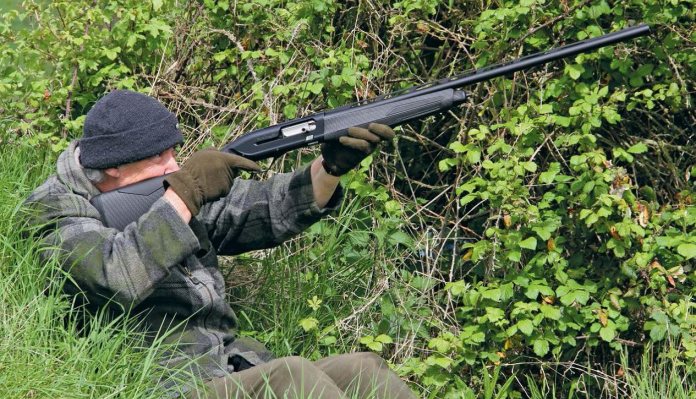 Browning’s Maxus semi-automatic shotgun has earned itself a very big following, due to its ultra-fast action design and reliability with a large range of cartridge types. Designed in 2009, the Maxus has now had a make-over, with not only a more modern design twist but several re-tweaked operating features to improve the performance. You have a choice of walnut or synthetic stocks, silvered or black actions, as well as camouflaged and carbon fibre finished stock surfaces.

This composite carbon fibre model on test comes with 5x Invector plus chokes, a back-bored barrel and stock extensions, which means it’s semi for all game and weather conditions.

The choice of barrel lengths includes 28” and 30”, with 3” chamberings. Naturally, they are all steel proofed, so are good for all eventualities and cartridge choices. The test gun came fitted with a 30” tube, making it good for sporting use and some competitive clays if you so wish, as the Maxus handles so well.

The rib, which is described on the website as tapered, is actually straight. It shows a 6.5mm width along its total length and possesses a good raised height above the bore at the action end, then slopes down to the muzzle with seven 2.5” vents beneath it to keep things cool. You have the customary serrated top and a single Red Hi-Viz sight at the muzzle. The matteblued finish is very well appointed.

The barrel comes supplied with Browning’s Invector Plus chokes (CYL, ¼, ½, ¾ and FULL). You will note the barrel is marked as ‘designed by Browning’ but made in Portugal. The back-bored system means the bore is slightly larger in diameter than normal, facilitating better patterns and less pellet deformation. The combination of the Invector Plus chokes, back boring and extended Vector Pro forcing cone, means superior patterns and reduced recoil.

I have always liked the Maxus action, as it looks good and just operates so reliably and easily in the field. Plus the cycling speed is pretty good as well. With its long, sweptback rounded style you have two short dovetailed scope mountings with a central serrated section running nicely into the rib profile. I must try some slugs and Aimpoint sights with this Maxus 2 one day.

The whole action is made from a high tensile alloy, giving the Maxus good strength for even the stiffest 3” magnum or steel shot loading. You have a lightweight steel bolt assembly with a 2-piece bolt arrangement, having the forward bolt head held captive whilst the main bolt body can articulate separately as the bolt is withdrawn, to ensure a positive grip and semi-inertia type extraction for any length case. A large extractor claw achieves reliable ejection of even the most stubborn steel loads. I like the jewelled bolt body and the large, tapered, 1.25” cocking handle, as it really helps when it comes to cocking the Maxus in the cold or wet.

There is a new oversized bolt release button on the right of the receiver and it shows an improved shape with a nice grooved surface for extra grip. There is also a lever-operated magazine cut off on the left-hand side of the action, allowing cartridges to be removed from the chamber without cycling another round.

The lack of connecting rods from the piston to the bolt carrier simplifies the operating system. Instead, a larger polymer shroud to the magazine tube holds a rod that contacts the bolt on firing, forcing it rearward. Browning’s Power Drive gas-operated system is well designed to handle a good array of cartridges from 24 to 36-grams. I tested some 21-gram cartridges and they did not cycle. The system offers 18% less recoil, 44% less muzzle jump, 19% faster bolt speed and 24% faster lock times. That’s why I like the Maxus 2. You also have an improved piston system, so residue from the firing process is minimised to the operating parts of the gas system, as seen on test.

The redesigned trigger guard, with a ramped front, improves the speed of reloading into the magazine. Also, the familiar Speed Load Plus system means that you can chamber the first round straight from the magazine without having to manipulate the bolt manually. So, overall, the Maxus 2 is a breeze to load.

Browning uses the injection moulding process for the stock and includes a foam-lined interior, which gives the Maxus 2 a lightweight, yet solid feel. I like the carbon fibre finish to the exterior and there is also a smooth, softer, top cheek section (SoftFlex), that’s not raised but provides a positive cheek weld. Its Reactar gel construction is designed to help reduce felt recoil. I also like the new soft-touch black rubber inserts to both the forend and pistol grip, which do indeed offer a better grip better than moulded in chequering of the past.

You still have separate stock adjustment inserts that allow you to alter the drop and cast to the butt stock by using a series of thicker and angled insets that drop in between the stock and receiver. Plus, the length of pull can be altered by using plastic extension inserts (supplied).

The butt pad is also innovative, being Browning’s Inflex design. There are internal baffles which help to push the stock away from the shooter’s face during the recoil cycle, thus aiding a quick second or third shot.

The forend is slightly less square in shape than on the original Maxus and now measures in at 12” long. It has a really nice feel to it and gone is the Maxus forend release lever, which has been replaced with a more traditional screw-on cap. I much prefer this.

I fitted the ½ choke and set up the pattern boards at 30 yards. Most noticeable is the superb fast cycling of this model and this combined with low recoil made for a, dare I say, pleasant test period.

First up were the Bio Steel loads, which have proven to be a really good patterning round in most of the recently tested shotguns. This load has 32-grams of No 4 shot and we had a total of 187 pellet strikes at 30 yards. There were 71 well-spread inner hits and the remaining 116 pellets hit around the 30” periphery, with a slightly upward bias. This is a very good allround load for those wanting a cartridge that is lead-free and patterns evenly.

Second up were the more traditional Eley VIP Game. Again, another very good patterning round that is smooth to shoot in the Maxus 2 and is 100% reliable in the semi-auto mechanism. I had the 30-gram No 6 shot loading with fibre wad and we had an excellent total of 202 strikes on the board. In fact, we had a near 50/50 split between inner and outer strikes, with 102 and 100 respective hits. Just a nice to shoot load, especially in this Browning.

Finally, a copper-plated round from Hull; the Driven Grouse. With a 65mm casing, the load contains 28-grams of No 6 CU shot. The hit ratio was again, high, with a total of 201 pellet hits and another 50/50 split! We had 109 inner and 92 outer pellet strikes and they were well distributed and evenly placed around the 30” board. It doesn’t get much better than that.

I have always had a soft spot for the Maxus. Being a semi, it’s more appealing to me and that fast action is impressive in the field. Add to this the new subtle features, the reduced felt recoil and the great patterns, and you certainly have a winner.