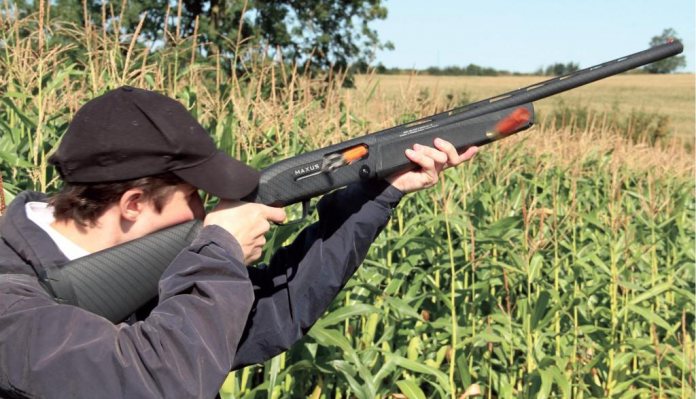 Browning`s Maxus range of semiautomatics have proven themselves not only in the field but on the clay grounds too. Their range of styles, finishes and barrel lengths allow a gun tailored to you or your style of shooting coupled to the reliability, smooth shooting, light recoil and control of this modern-day semi. Supplied with either wood or synthetic stock, Invector plus chokes, five of them, back bored barrels and stock extensions means a gun for all weather and game as well.

Traditionalists will like the blued action and high-grade walnut of the Black Gold versions or wildfowlers or pigeon shooters the Max5 camo clad versions. Here on test is the very smart and modern looking Sporting Black Carbon Fibre model with a carbon fibre weave pattern applied to stock and receiver/barrel surfaces.

It gives a very sleek and purposeful look to the Maxus and will appeal to those liking that modern feel combined with proven Browning semiautomatic technology.

The barrel is available in lengths of 28- or 30-inch lengths and 3-inch chamberings and all steel proofed too for all eventualities. I had the 28-inch length barrels which I prefer for hunting, but Competition wallers will probably go for the longer 30-inchers. Regardless the barrels are suppled with Browning’s Invector Plus chokes, five supplied, cyl, ¼, ½, ¾ and Full.

The Invector Plus chokes are designed to provide a more even pattern/shot density down range with less pellet deformation as they pass through. This is complemented by the extended Vector Pro forcing cone that elongates the forcing cone dimensions, and also with the back bored barrel cutting out a lot of pellet deformation by less friction on the barrels walls. The combination of these factors helps produce the good patterns on test on the pattern boards and also has the effect of reducing recoil, hence why the Maxus semi-autos are very popular. In fact, 18% reduction of recoil is noted by Browning.

The rib has a nice tapered length, starting out at 8mm and reducing to 6mm at the muzzle. You have the customary serrated top and a white bead inset at 12-inches and then a final Red Hi Viz sight at the muzzle.

For good effect the barrel, action and stock have an overall coating of carbon fibre weave pattern to unify the whole Maxus and also provides a good layer of weather protection.

The action has a long, swept back, more conventionallooking rounded style than its big brother the A5 with its humped back profile. You do not get the two dovetailed scope mountings on other models, so the lines are sleeker with the serrated lowered section running nicely into the rib profile. The whole action is made from a high tensile alloy giving the Maxus good strength for even the stiffest 3-inch magnum or steel shot loading.

Again, clad in the carbon weave pattern that does compliment the Maxus and Browning logo well and steel bolt assembly. This bolt mechanism is the two-piece arrangement with the forward bolt head held captive with the main bolt body, but it can articulate separately as the bolt is withdrawn to ensure a positive grip and semi inertia type extraction for any length case. The single large extractor claw has a good reach and deep hold, so is totally reliable, and the ejection is by a simple spur in the action wall; simple but it works. The whole bolt is lightened, further enhancing the speed, and lock time is very fast on the Maxus, and this can be seen in the pictures where a case is just ejected and another is already well into the chamber.

The bolt body is a jewelled finished and you have an over large tapered cocking handle, smooth, but at 1.25-inches it is a real help for cocking the Maxus when cold or wet or in a hurry. Similarly, there is an oversized bolt release button on the right of the receiver that allows the bolt to be released after the locked back last round position. It’s a bit crude and looks like a large anodised washer screwed in the existing release button, but it works. There is no magazine cut-off lever on this model, and I prefer it that way.

To further aid loading, the action cycling is speedy as the Power drive gas operated system is well-designed to handle a good array of cartridges. Loads from 25- to 36-grams weight are fine due to the pistons travel being increased by 20% for more reliability, not a problem with heavy loads but some light loads can be problematic, not so with the Maxus.

The valving and gas flow have a re-designed piston/ gas flow system that keeps debris, unburnt powder and sludge to a minimum.

There is a lack of connecting rods from piston to bolt carrier, instead twin short stroke units give a direct and positive operation to the bolt carrier to open and accelerate the rearward motion. Which is again noticeable when you shoot a Maxus, it feels fast.

The synthetic stock is moulded in two halves and has a foam-lined interior giving a more unified and solid feel to the stock whilst maintaining lightness which is echoed in the carbon fibre finish. Separate stock adjustment inserts allow you to alter the drop and cast to the butt stock by a series of thicker and angled insets that drop in between stock and receiver. This is not a gimmick, they do work, and you should at least try it, you might be amazed how it improves things.

This is further enhanced by the length of pull being able to be lengthened, again by plastic extension inserts, supplied, and the buttpad is also innovative, being Browning`s Inflex design with internal baffles thanks to which, when the shotgun is fired, recoil is actually lowered and angles the stock away from the face, so a quick second or third shot is soft.

The forend is long at 13-inches and has a shallow draft with a small dipped scalloped to rest the fingers and moulded in stippling. The Maxus forend release lever is unique, not a twist off but a push down on a blackened button to release a longer lever to allow the forend to slide forward. Dubbed a speed lock it is fast but a bit fiddle at first.

I fitted the ½ choke and set up the boards at 30-yards. This Maxus patterned better than some double shotguns costing five times as much!

The Eley Pigeon Select with its 30-gram loading of No 6 shot really patterned well giving an amazingly good even and dense pattern from that ½ choked barrel. I had 101 inner hits to 15-inches and 142 strikes all around the outer 30-inch sectors. Functioned flawlessly and superb patterns.

Hulls High Pheasant is a high-performance load and this load of 30-grams No 6 shot, another great pattern with a total of 220 pellet strikes distributed 66 inner and 154 outer. A little more patchy compared to the Eley’s, but a hard hitting load none the less.

Imperial Game, 28-grams of No 4 shot size is a lovely cartridge and it functioned perfectly through the Maxus.

The larger pellet size of No4 shot is a great game getter and I had 200 of these pellets on the boards. 66 inner strikes and 134 outer strikes makes this a really a good load in my book.

The Maxus is always a pleasure to shoot, not only because it is so easy to operate but it recoils less, cycles really fast and ejects reliably. It also digests a wide variety of cartridge loads and produces some amazing patterns on the boards that translates to more game in the field. The Sporting Black Carbon Fibre version is another great addition to the range and will appeal to Competition semi automatic shooters as it will hunters.