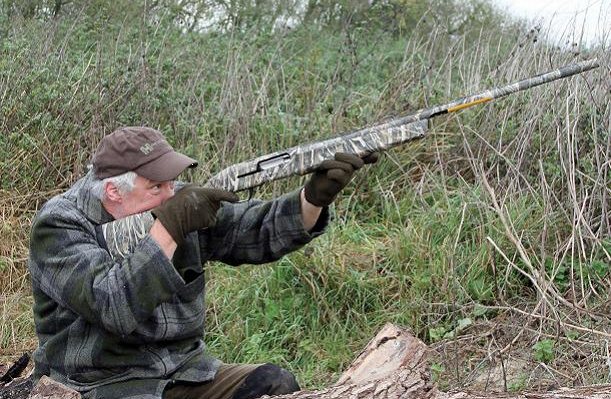 In the apocalypse, the trusty pump action would be a good bet; but for me, any of the Browning Maxus semiautomatics would be my choice. The reliability, smooth shooting, light recoil and control of this modern-day semi is amazing and you also have features such a Invector plus chokes (six of them!) back bored barrels, steel shot safe, 3.5-inch chambers and length of pull extensions; so, a shotgun for all reasons and seasons.

The Maxus is available in various guises. There are six models to choose from, The Premium Grade 3 has a brushed nickelled action with animal engravings and oiled Grade 3 walnut stock. The standard model Maxus One has a blacked action and walnut stock. The Maxus One Composite model with dulled action finish and synthetic stock is a practical all-rounder, whilst the Ultimate Partridges has a grade 3 walnut stock and partridge engravings to the action. The Carbon fibre model has a carbon fibre weave pattern applied to stock and receiver surfaces. Finally, two camo options- the Camo Country or this test gun, the Camo Max 5.

The action has a long, swept back, more conventional look than its big brother, the A5, with its humped back profile. You do get two dovetailed scope mountings, 11.5mm, so great for some red dot sight action with buck or slug, you may never use this feature but it’s nice it’s there. The whole action is made from a high tensile alloy, giving the Maxus good strength for the 3.5-inch magnum rounds, yet still achieving a light weight frame.

Within this, is the two-piece bolt arrangement. The forward bolt head is held within the main bolt body but can articulate separately as the bolt is withdrawn, to ensure a positive grip and semi inertia type extraction for any length case. The single large extractor claw has a good reach and deep hold, so is totally reliable and the ejection is by a simple spur in the action wall- simple, but it works. The whole bolt is lightened, further enhancing the speed.

The bolt body’s firing mechanism has a large external spur that the trigger hammer hits to set off the primer; this means a fast lock time and thus the speedy, natural and almost instant nature of the Maxus firing cycle.

As a useful feature, the Maxus has a magazine cut-off lever on the bottom left action side. This allows you to cut off the magazine from feeding, so that the bolt can be retracted and a cartridge removed from the chamber. Either to be safe when negotiating an obstacle or to change ammo quick. To further aid loading the action, cycling is speedy, as the Power drive gas operated system is well designed to handle a good array of cartridges. Light or heavy Loads are accommodated to match the piston’s travel with 20% for more reliability, not a problem with heavy loads but some light loads can be problematic, not so with the Maxus.

The valving and gas flow is also re-designed to keep debris, unburnt powder and sludge outside the functioning parts of the cycling system and the larger bleed valves vent gas more efficiently. There are no connecting rods, just a single synthetic push rod to accelerate the bolt carrier. There is also the Speed Load Plus system, where a cartridge can be loaded into the magazine not quite fully and is then instantly chambered into to chamber ready to be fired at a moment’s notice.

The trigger pull weight dropped the scales at 4.25lbs; I am sure it is better than the last Maxus I tested. The trigger blade is smooth and gold washed and the trigger guard has that all too typical, slightly dropped extended profile for a modern look and accommodate a gloved hand better.

The safety is your standard cross bolt system, sited in the rear of the trigger guard and just stops the trigger blade moving, simple and less to go wrong.

I had the 30-inch barrels and is now supplied with six Invector Plus chokes, plus an extended 5cm ½ choke which is good for steel. The rib is a small, 6mm and serrated faced with a sighting simple long red glow front bead. The Invector Plus chokes are designed to provide a more even pattern /shot density down range, with less pellet deformation as they pass through. This is complimented by the extended Vector Pro forcing cone that elongates the forcing cone dimensions and also with the back bored barrel cuts out a lot of pellet deformation by less friction on the barrel walls. This all combines to good patterns and also has the effect of reducing recoil, hence why the Maxus semi auto is a pussycat to shoot.

Both the barrel, action and stock have an overall coating of Camo MAX 5 pattern from the Real Tree stable, which is my favourite, although the Country Camo is also available or available sans camo clad, as the plain Maxus One Composite.

The synthetic stock is moulded in two halves and has a foamlined interior to avoid that echoing sound from other type stocks. It’s a practical design that you can shoot or modify to shoot from either shoulder. Separate stock adjustment inserts allow you to alter the drop and cast to the butt stock by a series of thicker and angled insets that drop in between stock and receive. They really help to adjust the handling, so that your eye aligns to the rib correctly.

This is further enhanced by the length of pull being able to be lengthened, again by plastic extension inserts, supplied and the butt pad is also innovative; being Browning’s Inflex design, it has internal baffles that when the shotgun is fired, the recoil is actually lowered and angles the stock away from the face, so a quick second or third shot is soft.

The forend is long and has a shallow draft with a small dipped scallop to rest the fingers and moulded-in stippling. The pistol grip has the same stippling and a moulded-in sling swivel fitment.

The only thing I do not like on this Maxus is the forend release lever. It is in the front of the forend and you have to push down on a blackened button to release a longer lever to allow the forend to slide forward. I find it very fiddly and not to my liking.

You can attach a sling to this catch and also to the butt, via the moulded-in swivel recess.

I conducted my usual pattern board tests with a selection of ammunition and also took the Maxus out after duck and some pigeon decoying but that took an interesting turn, which proved the Maxus is capable of all game species.

I was using the 76mm case loaded with 36 grams of Steel Fe1 shot size 4.0mm, which equates to 125 pellets. This is one for the dedicated wildfowler, and as with many steel loads, tend to shot high and either left or right. These did both, high right bias but managed 109 total pellets on the board distributed 78 in the outer 30-inches and 31 within the inner sector. A heavy load!

This is Hull’s high performance Pigeon load with higher velocity, more effective range and harder hitting potential. It is also designed to be semi-automatic friendly.

This load held 29-grams of No. 6 shot but you can have a plastic wad also. The load continues to perform well. You get a good count of total 239 pellets, 90 of which are densely packed into 15-inches and very distributed, whilst the remaining 149 pellets are spread in the outer portion. Dependable and a really good all-rounder, despite the Pigeon label.

These are your typical fox or inland wildfowl load not over water. There are fewer pellets being a BB load but the Maxus managed to get 75 total pellet count on target at 30-yards. With the half choke not bunching the shot through the Invector Plus, you get a very good shot pattern. 40 outer pellet strikes and 35 inner hits with a good overall spread, nice dependable hard hitting load this one.

These new copper coated pellets are all the rage and judging by the pattern boards the less deformity they afford, coupled to the Maxus back bored barrel, there is truth in the hype. I had the 70mm see-through case with fibre wadding and a payload of 32-grams of No. 5.5 copper shot with a high 12mm rim.

A total of 159 pellet strikes within 30-inches at 30-yards with the half choke fitted. A very even inner 15-inches spread of 48 pellets, with an equally well distributed 111 pellets in the outer sector. Great for pheasant, or as stated on the box, Driven grouse.

This Maxus, on half choke, shot great patterns, so I thought I would set up amongst some felled logs and trunks as a hide in between a flighting route for some pigeons. Trouble is, the pigeons had not heard of my intentions and a totally different scenario ensued.

I was loaded with Hulls’excellent Super Fast Pigeon load and great all-rounder and perfect for these fast low pigeons, trouble is, no pigeons; a couple of pheasant soared overhead and I let them go. A couple more, I knew the farmer wanted some Christmas game, so the Maxus barked and the lead pheasant dropped. Two more and Jake took over and six more fell to the Maxus. Not what I figured at the start of the day but perfectly shows that a semi auto is more than capable of game shooting, a Pigeon load is still a great pheasant load and a teenager is still better than his Dad at shooting!

I would have liked to get some ducks or geese but that’s just life but it shows the diversity of the Maxus in terms of cartridge and handling functions for all game species. A great all-rounder, that loaded with the correct cartridges and size shot, will produce good patterns when needed, pointed at the target!