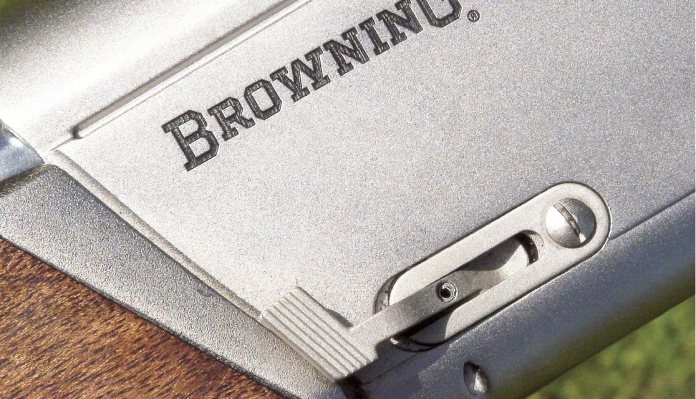 When Browning announced a whole new semi-auto, everyone took notice. And it didn’t take long for the Maxus, in all its guises, to quickly hit the number one spot, displacing its sister semi, the Winchester SX3, as the European best seller. For it to do that within such a short space of time, there had to be something about it. A combination of Browning’s renowned designs with a hint of tradition, the Maxus acknowledged certain aspects of what had gone before, ensuring that the gun had sufficient appeal to both established enthusiasts and those looking for something slightly different. The Maxus provides its owner with everything they’re likely to need. Sling swivels, stock shims, a full set of flushfit Invector chokes, plus an extended ½ duck choke that adds two inches to the barrel, a trigger lock and alternative beads, all in a plastic travelling case. Assembly is in the usual fashion of inserting the barrel extension into the receiver until it’s fully seated and then by sliding the slightly angular forend over the mag tube. The main difference is the ‘Speed Lock’ latch that’s more akin to an over-under shotgun. By pushing the unit firmly into place, the metal lever situated at the end is then pushed down into place, locking the forend and barrel to the rest of the gun.

Conversely, to remove, the small square button on front of the latch is depressed, which then allows the lever to unlock. Neat and tidy and far quicker to use when compared to the usual mag cap; the downside is that the mechanism precludes the fitting of an extended magazine tube.

Dependant on the grade, the alloy receiver’s finish is either camo, black or brushed satin. Similarly, the Grade 2 as tested, Grade 3 and Ultimate Partridge depict game birds, with and without the gold inlays. Inside the receiver, Browning’s time proven two-piece, single-claw bolt takes care of the detonation process, whilst the Maxus can be loaded in the usual fashion by dropping the first shell into the ejection port and depressing the bolt release. The gun also features the ‘Speed Load’ system, which means by pushing the first round into the magazine, the mechanism automatically chambers the first round, whilst cartridges two and three then enter the new lightweight magazine tube in the usual fashion.

On the left side of the action, a magazine cut-off lever allows the shooter to discharge the round chambered or remove it by operating the bolt by hand, the next round that would normally cycle automatically remaining firmly in the magazine when the cut-off is flicked rearwards. Conversely, by turning the Maxus upside down and pushing down on the shell lifter with the left thumb, a gentle push on the small lever on what is now the left side of the inverted receiver, allows the rounds in the magazine to feed smoothly back into the shooter’s other hand.

The only other control is the safety, a slightly oversized cross-bolt situated to the rear of the trigger guard and behind the fixed trigger. Further forward, with the forend removed, the ‘Power- Drive’ gas system is unusual, in that the new larger gas valve is integral with the slide. Whilst smoothing out the overall feel of the Maxus when the system is in motion, Browning also claim it cuts down on residue build up. The 30-inch back-bored barrel is chrome lined; steel proofed and has a three-inch chamber. The gloss black tube is topped off with a 7mm vented rib and high visibility, interchangeable bead. Like most wooden stocked semis, the dimensions of the Maxus have been well thought out to a degree that they should fit most average-sized shooters. Combine these with the evenly, open radiused grip and the Inflex recoil pad and you end up with a semi-auto that provides the user with a near perfect view along the rib, a gun that when correctly mounted is comfortable along with stock angles and a mechanism that significantly add to the ease of control and recovery for the next shot, aided by the overall 7lbs 6oz weight and comfortable dimensions.

Used with a selection of 24g and 28g Cheddite loads around Malmo Gun’s private sporting layout, the Maxus upheld its reputation. With the balance point situated directly beneath the chamber and even mass distribution, the gun pivots squarely between both hands. This means that this Browning is both easy to move, even on diametrically opposed targets, whilst smooth at all times, resulting in a shotgun that retains its refinement, whilst the ‘Lightning Trigger’ lives up to its name.

All in all, the Maxus is still able to prove its worth under a variety of conditions and capable of living up to all the claims Browning have always made. As an all-rounder, it’s my opinion that the Maxus is probably as near as you’ll get to the title, a single-barrel that can turn its muzzle to whatever target you’re pursuing, without having to resort to gadgetry or abstract designs, all in for around £1609.

With thanks to Malmo Guns, (www.malmoguns. com) for the provision of the Browning Maxus, where this gun is currently for sale, the 24g and 28g Cheddite cartridges and their private layout.