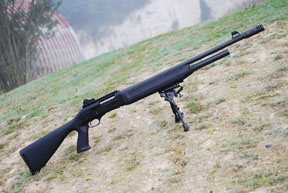 Guns built exclusively for the discipline of PSG (Practical Shotgun) are reasonably rare these days, as most users tend to buy a sporting semi-auto (normally a Remy 1100 or 11-87) get a big mag extension and leave it at that. However, items like pistol grip stocks, muzzle brakes and even iron sights can add to the package and this is what I have here; a true out-of-the-box, all-round PSG’er…

Fabarm are noted for their prolific choice of shotguns, which ranges from double barrels to pumps and autos, with the last two also being offered as specialist models to the police/tactical community. It’s here we start as they make a model called the S.A.T.8 Pro Forces, with its short, 20” barrel, 8-round capacity, muzzle brake and iron sights seems ideally suited to those sorts of need.

Longer, But Not That Much

Obviously Fabarm saw a requirement for a civilian/sporting version that would appeal to the international Practical Shooting community and simply lengthened the barrel of the Pro Forces version to 24”. Lucky for us as that minimum length means it’s UK -legal.

Like the Benelli M2 Practical I tested last month there’s no mistaking the role of the S.A.T.8., so let’s take a closer look at what’s good and what’s just window dressing. The mechanism is the standard, Fabarm gas/piston system with a self-regulating valve, which should make it reasonably tolerant of most types of ammo. To this they have added a big, bolt handle, which in my opinion is a must-have feature for any semi-auto shotgun!

The pistol grip butt is something I do like, as it offers a lot of gun control; this is finished off with a rubber recoil pad. I found it came up a bit short in the shoulder, but you can get extension pieces to lengthen it. The deep and rounded forend is very long and fills the hand well; grip is enhanced by panels of texturing and slotting. Underneath is a 4 3/4” section of Picatinny rail, which will accept pistol grips, lights or lasers. Frankly it does little for the hold and is simple to remove.

The most striking features of the gun are the iron sights and muzzle brake. The sights consist of a 6 ¾” Picatinny rail on top of the receiver with a removable, LPA ghost right aperture. This is flanked by two, green, (hi-viz) light gathering bars and is fully adjustable. Up front is an A-frame with protective wings, inside of which is a blade with red, hi-viz insert. OK many Practical Shotgunners don’t bother, preferring the sporting-type pin of the standard shotgun set up, but the two-colour line up works for me, they would be good for slug shooting, where you need point target performance. Plus you could always fit a red dot on the rear instead.

The muzzle brake is a doozy; 3 ½” long with vertical and angled gas/blast ports it features a row of serrated teeth at the front. Fanciful, but also built for a purpose, which has nothing to do with PSG. It’s actually designed for wire cutting and also allowing the gun to be literally jammed into say a door hinge to blow it off for room entry. Not a lot of that going on at a competition I grant you, but there is also a modicum of recoil control offered. If you don’t like this overly aggressive look (I have to say I do) you can unscrew the brake and fit a selection of normal chokes instead. Which, with its 24” barrel, is probably a better bet for longer shots on a course of fire anyway.

The capacity is 7+1 as is attested to by the magazine extension under the barrel, this is the same length as the tube on the Pro Forces and I wonder why Fabarm does not offer a longer one for PSG work, as it would be appreciated.

Controls are similar with one major exception that at first had me scratching my head, and only a call to importers Viking Arms Ltd sorted me out. At the rear of the trigger guard is your standard, cross bolt safety catch. Forward left on the receiver is the manual bolt release, underneath is the loading port, which shows a slotted shell lifter, which is useful for clearing a feed jam. Apart from the extended cocking handle, which I already mentioned, that’s that!

Most semi-auto shotguns will automatically lock open when they are empty and you pull the action back, not so the S.A.T.8., as the bolt, annoyingly, slams shut again. Normally there’s some sort of catch to press that holds it, but I could not find one. Thinking the gun was a duffer I rang Viking and was told that this function is actioned by pushing back on the tip of the shell lifter arm, which when you look at it does hang down a bit more than most other makes, so making finger access reasonably easy. I wasn’t really sure if I liked this feature but it does work.

The S.A.T.8. is a light gun coming up empty at just 7 lbs and for me was short in the shoulder, though shims can be added. The magazine spring is quite strong and you also have to fight the resistance of the shell stop when you load up. What I did like was the fact the shell lifter automatically rises just enough to trap the base of the shell, so it won’t pop back out, this then allows you to use the nose of the next one to push the one in front past the feed gate. This saves a bit of wear and tear on your thumb for loading, which over a days worth of shooting is really appreciated.

The Fabarm was shot with my usual cross section of slug, buck and bird and I have to say was a bit thumpy in the shoulder, though all cycled reliably. In my opinion the big muzzle brake does not do as much as it might seem to. I also found some light, 24-gram loads, which the gun did not like, as it short stroked with them, either re-chambering the fired case or just holding open with the case stuck in the ejection port.
Not that uncommon with semis, but a bit surprising given the self-adjusting mechanism, chances are the shells were way too light!

Though liking the extended cocking handle, which is a real boon, as there’s a lot to get hold of, I was a bit disappointed that this over-build did not extend to the safety catch. Frankly the cross-bolt is far too small and slim and could do with being generally bigger for easier/faster operation. Let’s face it, in PSG it’s all about safety when moving with a loaded gun between targets and negotiating obstacles…

Though personally liking the iron sights, scope rail and even muzzle brake, they are more ornament than use for the majority of British PSG shooting, though ideal slug gun accessories. The S.A.T.8’s general build and feature are good, with well thought out furniture, but for the UK market a plain 26” barrel with rib and a higher capacity magazine extension to up the payload to at least 10 would be better.

Generally a nice gun, though in this version totally PSG-orientated and only for those who like all the whistles and bells…