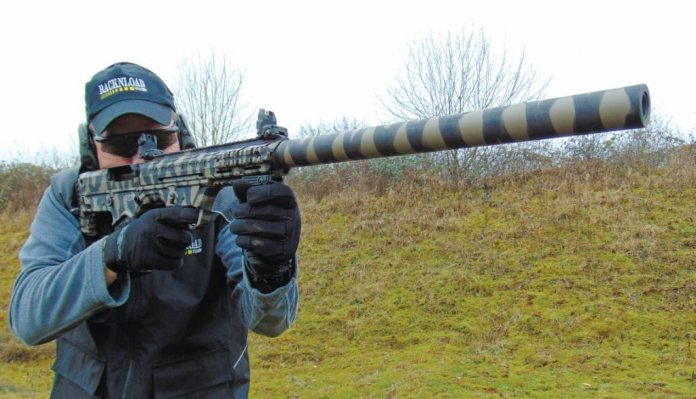 Magazine-fed shotguns were something to dream about years ago, but in recent years the market has seen several appear. The Typhoon F12 was probably one of my favourites, and was so impressed with it that I actually purchased one in FDE – very sexy! The Web-Tac was also a very good gun with slimmer lines than the F12.

I often refer to these shotguns as ‘Turkish delights’ because they are usually always from Turkey. In fact, I think every box-fed that I have tested has been Turkish. I recall being at the IWA show in Germany in recent years and noticing these Turkish delights almost everywhere you look! Yes, they are a bit samey, but when I noticed some of the new bullpup configurations it really got me asking the question: when are these things coming to the UK? And at last one has! Okay, so the ones that I see at the trade shows are somewhat shorter in length, well almost half the length, of our UK requirement, but hey let’s not moan.

Allow me to introduce you to the Hunt Group FD12 semiautomatic gas-operated bullpup shotgun. If you have started looking at this shotgun from the muzzle end then you may mistake this thing for a rattlesnake, what with its camouflage colouring and length of barrel! Other colour options are available, though, might I add. I personally think that this shotgun is not going to be to everyone’s taste, especially if you’re a lefty because you can only shoot this thing right-handed, unfortunately, and this made things very interesting for my testing as a southpaw.

From the buttpad end then there is a nice rubberised ventilated recoil pad to help soak up the recoil, oh and, trust me, it bounces a bit because the action is all the way back rather than in the middle like on a conventional AR style shotgun. From the recoil pad you go straight to the receiver. On the lefthand side is the cheekpiece, if that’s what you want to call it, or the bit where you put your face, and like I said you do not want to put it on the other side and shoot this thing left-handed because, as you can see, the bolt and ejection port’s location will not allow it. The ejection port is literally right opposite where your face is and, to be honest, it is a little unnerving what with this being a 12-gauge brute! But you really don’t notice much difference from a conventionally laid out mag fed gun apart from a bit more smoke further back than usual.

Obviously, underneath this area is where you will find the magazine well, pretty self-explanatory, but it really does feel a little odd loading a magazine into a gun behind the trigger area! The magazines themselves are identical to those of the F12 typhoon, steel in construction with a big plastic follower to take those 12-gauge cartridges. The mags that are supplied with the FD12 are in 3-, 5- and 10-rounders with the latter being pretty huge, and when it’s loaded into the FD12 it almost makes the gun look like the Grim Reaper’s scythe! But shootability wise it doesn’t get in the way unless you are doing a bit of slug shooting off a bench, where I’d recommend the 5-round magazine.

Moving forward slightly is the pistol grip, and very AR it is too. It is rubberised and feels very comfortable and offers plenty of grip. Above the pistol grip is the safety catch and like on the F12, I think there is a slight design floor with it, as when it is in the fire position the catch itself is pointing downwards indicating the F for fire above it. The handle of the safety catch is now in the downward position and has a pretty sharp pointy end to it, and after a few shots it starts to dig into the side of your hand. The Typhoon’s one did exactly the same and had people swapping them out for different AR style ones.

Moving forward of the pistol grip and integrated trigger guard is a section of picatinny rail for adding accessories, but what is very cool is the fact that the gun comes with an adjustable foregrip. There is a panel of rail either side above this also. The charging handle is actually ambidextrous, surprisingly, on this very un-ambi bullpup! Simply swap the handle from one side to the other.

So how did this boom stick perform at the range? Well, pretty good, in fact. I had a box of 250 rounds D and J 32g cartridges. Firstly, I loaded up a 5-round magazine the into the shotgun. I pulled the cocking handle all the way back and then let it go under spring pressure to chamber the first round. Ready to rock! I had a steel gong set up 25-yards away just to make things more interesting.

Now, like I said, and as you probably know by now, I’m a lefty and this gun felt very weird to shoulder, but I have no choice but to shoot it right-handed. Surprisingly, though, it felt really good to shoot. A little jumpy, what with it being a bullpup with the action being at the rear of the gun rather than the middle, it does kind of make the gun want to go muzzle up with every shot! The first 5-round mag ran perfectly. So, now for the huge 10-round one. Again, no malfunctions; in fact, it ran amazingly well, and I must admit that I was very sceptical at first, with it being a bullpup configuration.

The only issue that I had was when pressing the bolt release, which on the FD12 is just like what you have on an AR platform, it would not quite strip a round fully from the mag and put it into battery fully, so needed a little ‘persuasion’ or a tap forward on the charging handle to do the job! Lots of mag dumps later and clattering of my gongs, I really got the feel of this right-hand-only shotgun – blimey, I must be turning ambi! Ejected cartridges are flung slightly forward and about 6ft away so great ejection.

Now, with this long barrel, and from what I’m told, this shotgun is an excellent slug gun. Good job it comes with pop-up iron sights as standard then! So, it was time to get set up on the bench and push some heavy weights through it! With a gong set up at around 75-yards (yes, a big one!), I just loaded the 5-round mag rather than the 10 as that would of meant me cutting a hole in the bench just to shoot it off a rest! My rest was a Foam Action Sports one and was just the job for getting into a comfy position from which to shoot. My first shot was a little low and did not connect with the gong, but once I knew where the FD12 was sending those 1oz slugs, I pretty much rang that steel every time! Yes, this shotgun is an excellent slug gun!

Overall, I think this shotgun is very different in looks and feel from any shotgun that I have tested. It’s not for me, being a southpaw, that’s for sure, and I somehow don’t think the practical shooters will embrace it for competition!