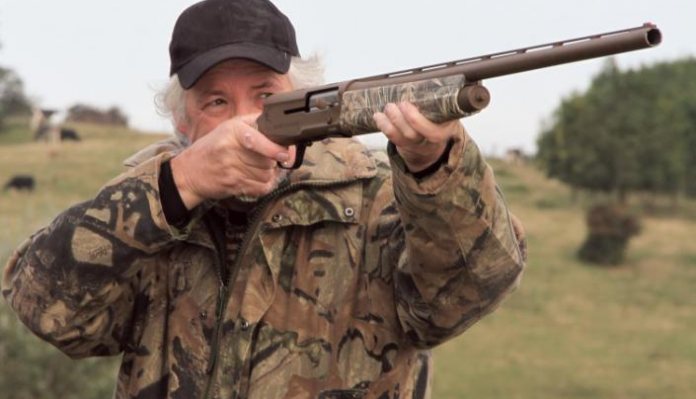 I have tested the A5 many times and it difficult to find anything new to say about this iconic piece of shotgun history.

I may be a bit biased, as I love the design and looks of the A5 and the new Browning offerings are superb. This Grande Passage model is an out and out hunting tool and clad in camo Max 4 stock finish and super strong Cerakote olive drab metal finish you have yourself a semi-auto shotgun that’s at home in a pigeon hide, as it is on the salt marshes after ducks.

I like the simplistic nature of a good old inertia operated cyclic action that in some part is more reliable than a gas operated system, as it eliminates the gas seals and ports that can go wrong; however, you are reliant, with an inertia system, on the cartridge you are firing having enough oomph to operate the bolt system. The A5 has always been good with this regard and only the lighter 24g and below showing the odd none cycling. Also, it is important to remember to shoulder the A5 when firing, as inertia has to work against something, i.e. your body, to have action and reaction, that’s just physics.

Browning offer a 100,000 cartridge, or a seven-years, guarantee with this system; so, enough said about reliability. It is dubbed the Kinematic drive system that utilities the kinetic energy from the fired case to produce a smooth and totally reliable, shortaction operating system.

The action has that typical ‘humped-back’ appearance; some like it, some don’t – I really like it! The action is made from a lightweight aluminium alloy for both strength and longevity and, being a major part of the shotgun, it keeps the weight down to 3.1kg. The whole action and barrel on this Grande Passage model has a really good hard anodised finish in an unusual matt olive green or olive drab colour. It really looks superb in my view and perfectly blends with the camo stock finish. You also have an etched picture of a flighting duck to both sides and the Grande Passage name.

The trigger guard is kept black for contrast and the top of the action has twin scope mounting dovetails for a scope or red dot, if so desired. The bolt locking system follows the two head rotating ethos and so has a reciprocating bolt head that has four small locking lugs that rotate on lock up or release and mortise directly into the barrel abutments. Good and strong and reliable for peace of mind.

The body is flat finished in a coin silver finish but has a serrated bolt handle the same colour as the action and barrels. There is a single claw extractor with a positive ejection system and cases are thrown from the right-side ejection port by a small spur in the action wall.

Locked open on cocking and a swift push of the bolt release sited to the right of the action closes the bolt. You also have a speed load system that allows a top up of rounds via the non-bolt opening operation.

The trigger is broad for a shotgun and, typically Browning, is gold washed and smooth. It has a generous trigger guard space for a gloved hand. Safety is via a tang mounted straight push cross locking button, simple and I like this; I hate auto safeties found on O/U shotguns.

The whole action feels very well made and smooth to operate, as the bolt is easy to open and feels like a smooth rifle’s bolt.

At 28-inches long, the barrel is ideally suited for all round use, although a 30-inch option is available, and the chambering is for 3.5-inch shells, so good for anything from 2¾ to 3.5-inch mags.

The Invector DS choke system is one of the best on the market and is designed to achieve optimum performance from the load you are shooting. The double seal (DS) choke is thinner, yet longer, and so has a better shot pattern characteristic with a variety of loads. The DS choke means a very dense and consistent shot pattern with a variety of shot size and payload, it also stops pellet distortion. This is achieved by a new brass seal that effectively seals against choke tightening and ensures a perfect shot pattern.

The back-bored Vector Pro barrel increases the diameter of the barrel diameter, whilst extending the forcing cone, which increases the shot column speed and thus shot penetration down range. It also has less shot deformation and so shot patterns are denser and more uniform too, combined with less recoil.

The rib is slim at 6mm and the sighting is via a single, long Day-Glo red fibre optic foresight, with low shallow rib vents below.

To me, the stock makes a rifle or shotgun; it’s the largest part of a gun, get that right and the rest of the gun falls into place. The A5 stock is very well designed, as the whole gun feels very light and naturally points to your eye’s aim that can be corrected with cast inserts if desired. Its also lighter, too due to the synthetic nature of the stock material, which has a tough outer shell and urethane filler, without that hollow feel, very nice.

The forend is long and quite thin at 11.5-inches, with only a small finger groove to the top half but grip is aided with several panels of stippling. It is removed/attached by the usual semi-auto shotgun type large knurled retaining nut to the end of the magazine, which also has a rotating sling swivel stud. The forend also attaches to the barrel prior to attachment to the action. Ordinarily, you fit the barrel and then offer up the forend stock; the A5 just clips on to the barrel and is inserted as one.

The rear stock has a good hold due to the quite upright stance of the pistol grip and palm swell on both sides. It gives a very assured hold and is further helped by more stippled panels for grip.

I had only one choke with the A5 and that was a ½ choke with additional sizes being available for £48 or so. I shot a variety of cartridges to ascertain the A5’s performance down range, including lighter 2¾-inch cases. right up to 3½-inch shells.

This is a magnum 3.5-inch load with a high velocity of 1300fps and contains a buffer shot column. The payload was a whopping 2oz of No. 5 shot, which is coppercoated for greater down-range penetration. I had a total of 118 pellets hit the 30-inch board at 30-yards, distributed with 23 pellets in the inner sector and 95 pellets to the outer area. A very hard-hitting load.

These are one of the best, allround steel game loads and this 32-gram, No. FE4 loading in a 70mm case really performed well. I had a total of strikes, with 47 inner and 73 outer pellet hits that no game could get through; a very good pattern.

The A5 might be an old classic design but Browning have brought its overall performance and design right up to date. I like the hump-backed design, as it allows a direct line of sight; to others, not. Also, even with those Remington 3.5-inch magnum loads, the recoil was manageable. And with Pigeon 30-gram loads was very easy on the shoulder. The Grande Passage’s finish in Cerakote Olive drab looks superb and also protects the A5 in any harsh environment and the Max 5 camo clad synthetic stock completes what is a superb all round semi-automatic shotgun.