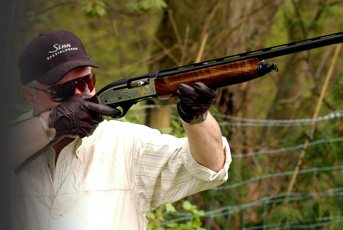 In Europe, Guerini’s semi-autos have been available for quite a while. Just like their over & unders, they have quickly developed their recoil-operated guns into a distinctive range. Based around what at heart is the same gun, all the buyer has to do is decide upon the finish and grade, the pricing structure ensuring that whatever they finally select isn’t overly expensive whilst embodying Guerini’s reputation for providing one of the most comprehensive packages on the market.

More or less the mid range model, when you open the case you’re immediately struck by the quality of the walnut and the elegant ‘Prince of Wales’ stock. Nicely grained with a semi – oiled finish, the woodwork is refined and fits well, whilst the rounded pistol grip adds visual and graceful refinement as does the long, slender forend and distinct panels of chequering.

Matte black anodised top and bottom with dovetails for scope mounts the MMIII grade aluminium receiver benefits from silvered etched scroll engraving that blends into hunting scenes. Creativity aside, the bolt release is located front left of the receiver, the bolt lock at the front of the sunburst effect black trigger guard with a cross-bolt safety at the rear.

Echoing the inlays, a narrow, hatched gold-plated trigger blade sits inside the ovoid guard whilst the polished, silvered surface of the shell lifter almost shouts from its shrouded confines. By pushing down on the shell lifter a small lever located at the mouth of the magazine tube allows the rounds to be easily unloaded.

The bolt shows a single, forward rising locking lug that engages in the roof of the chamber extension. It sits on a carrier with twin forward extensions that locate around the mag tube. There is no return spring in the butt just one around the tube. The 28” barrel is gloss black, well struck and crowned with a 5 – 7mm vented, tapering rib with an extended, interchangeable high-vis bead and a set of five flush-fit multi-chokes.

The barrel ring sits between a doughnut – shaped metal washer and a short, stiff spring located within the mag cap. Together, these regulate the amount of energy required to cycle the Roman dependant on the load, the Guerini equivalent of a gas regulating valve. A word of warning, don’t over tighten the mag cap or it’ll lock itself in situ.

Shooting the Roman soon became a technical experience. Guerini’s dimensions ensure the gun should comfortably fit most shooters, the 7lbs 2oz weight balancing directly beneath the mouth of the 3” chamber whilst drops at comb and heel of 1 5/16th and 2 1/8th allied to a length and weight of pull of 14½” and 6lbs 4oz respectively make for a full sized, flat shooting semi of adult-sized proportions.

Looking exactly where you do and delivering its charge of lead with what at first seemed an overwhelming punch, a less than impressive round of clays was the initial result. Why this should be so was answered after each of the flush-fit multi-chokes had been tried along with a selection of ammo and varying shot sizes from Express, Eley, Hull and Gamebore. The end result was somewhat unusual, the Roman performing its best when fitted with ½ choke and firing 28g Express Supremes or Hull Sovereign but only when filled with 6½ size shot whilst showing complete contempt for any and all 24g loads or smaller.

Recoil-operated shotguns do tend to suffer from intermittent operation with light loads, as the energy they create might not be enough to fully cycle the action. It’s a tricky balancing act and even the vaunted Benelli suffers from this symptom at times. Likewise you need to hold the gun solidly so as to offer resistance so the recoil forces can work to their full potential. A loose grip will allow the gun to literally bounce in the shoulder so exacerbating the situation.

Once you’ve come to terms with these facts you can adapt your style accordingly by taking a firmer hold of the forend and pulling the gun a little more into the shoulder. From there on in 90%+ scores resulted, the Roman picking targets off with ease even at 50-yards with ½ choke giving not the slightest problem. The central mass promoting quick yet precise movement as it pivots around its own axis. Similarly, whilst the Roman makes no particular claims to be one of the fastest cycling semis, it would seem to be up there with the best only the physical speed of the trigger finger impeding progress.

Given the gun’s preference for punchy loads and taking into account the fact that Italian hunters would probably use it for boar with slug loads, we tried some with Cylinder choke fitted. Returning to ½ a selection of non-toxic gave it some real stopping power. Taken as a whole though, whilst the Roman eventually acquitted itself more than admirably as a clay breaker, its true metier is that of a hunting shotgun, a distinctive and stylish wildfowling companion or for any outing where heavy loads will be used.

View of the Senate

Whilst Guerini’s Roman MMIII won’t suit everyone by virtue of the fact of its operating system, it’s well worth taking a close look at one. At £1,175 it’s not badly priced, looks good and is extremely efficient once you’ve got used to its little foibles. Equally, you could save a few quid and opt for the more basic black actioned MMI or add a couple of hundred and go for the top end Gladius, a shotgun worthy of a Milan catwalk.

All in all a good, functional yet stylish 12 bore with bags of entertainment value thrown in for free. The only thing then required for a trouble free life is to find out what it likes to shoot!

We Reckon:
• Italian style at a budget price
• Get the right ammo
• Another comprehensive Guerini package