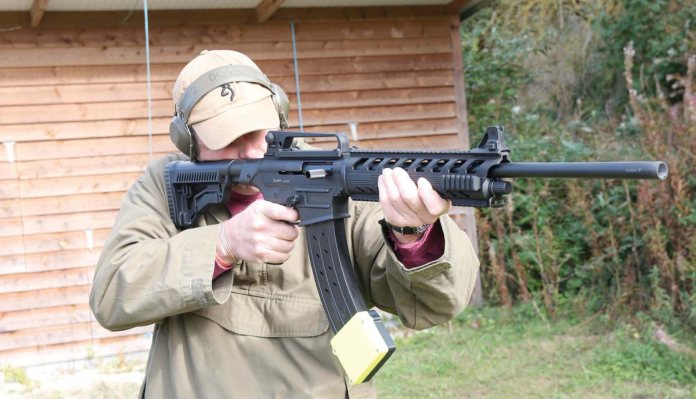 As a young Practical Shotgunner (PSG) back in the early 1980s, we all used sporting pumps and autos with big magazine extension tubes to get the capacity up.

But what we really wanted was a box mag system that would speed up reloading no end. But, and despite much talk and BS, it was not to be! The first box mag gun to appear was the SPAS 15; essentially it used the same, selectable pump/ auto operating system of the earlier, tube-magazined SPAS 12.

However, the 15 never took our world by storm, as they were expensive, few and far between and only offered a 5-shot mag. I tested one and came away feeling a tad disappointed, as the dictates of a box magazine system for a big 12-bore cartridge are not as positive as you might think! Carrying a belt full of what were huge yet low capacity magazines – you’d need at least 10 for a jungle run pushed the word practical to its limit, plus, factor in the ease of losing them in the long grass. But it still had a wow factor.

The next incarnation of the box mag PSG gun came with the Saiga 12; essentially a big, 12-bore AK47. Cheaper than the SPAS 15 and more available, they came with an 8-shot mag as standard and had an appeal. However, they initially suffered from the sour grapes syndrome of the then UKPSA, who felt they gave an unfair advantage over tube magazine guns.

But eventually they became accepted but in truth were still in the minority. Next came the MOLOT Vepr 12; essentially an improved Saiga; better perhaps but certainly more expensive and not that common. But the box mag gun had arrived and was now officially recognised and accepted into the fold albeit grudgingly by some people! So what next?

One out of two

With the unlikely name of the Akdal 1919, a new box mag gun appeared in the UK in 2013 from Cactus Arms. And pleasingly it looked like an M16 A2 rifle, with some similar controls and a fixed butt, round forend and iron sights with a D-handle at the back and an A-frame foresight almost on the muzzle. The gun was Turkish and used a gas/piston operation system with the military styling covering a standard, semi-auto mechanism. It ran on 5- and 10-shot magazine; the latter being massive, the gun proved reliable. Unusually the lower receiver was all polymer and incorporated the pistol grip.

The 1919, in many ways was a revelation but not cheap at around £1000, as I recall. It was followed a year or so latter by what was in effect the same thing but with slightly better cosmetics – the Bora Barak 99. Imported by Low Mill Ranges, the major changes were the rectangular forend with an integral Picatinny rail at 12 o’clock and a QD foresight moved to the end of the forend. The D-handle remained, though the butt now had a vestigial comb/cheek piece. Plus, the price was £700!

So now the PSG shooters had the option of a wellpriced and reliable box mag machine. The evolution from tube to box feed had only taken 34-years; well it is Britain and we don’t rush anything!

Recently, my advertising department asked me to speak to ACP Shooting, as they had a new box mag semi-auto shotgun, the unlikely named ‘Escobar’ (yes the notorious Colombian drug lord) made by HDM. Guns are imported into the UK by Cactus Arms (Ron Flint) and ACP is one of their retailers. I thought it looked familiar, as yes it’s an Akdal or Bora Barak in a slightly more modified form, and better for it. Also and in this day and age it’s cheaper and includes 2x 5-round mags; a snip at £650!

There are however four major changes! An alloy, freefloat forend with a full length Picatinny rail at 12 o’clock and shorter sections at the front and rear. This alone feels solid and more reassuring. Gone is the fixed A2 butt, replaced by a CAR15 telescopic-type that offers a decent rubber recoil pad and 5-position length of pull, so will fit anyone. The standard C-shaped and small cocking handle has been replaced by a big tube-type design and the mag button by a larger and swept back catch, which is just that bit easier. The safety is located on the left above the trigger, and forward of that is the automatic last round hold open and manual bolt reels as before. A rear D-handle and front QD sight are included; the only problem is the flat top receiver’s Picatinny rail is about 1/8-inch lower than the one on the forend. Barrel length is 24-inches dead with a set of screw-in multi chokes. Though near identical to the Akdal and Bora, the HDM looks and feels by far the most shootable variant so far!

The gun is offered with 2x 5-round mags as standard, with 10-rounders as optional extras at £40 each. The fives are of reasonable size and weight though a tad low on capacity, with the tens probably on the edge of practicality. Though larger/ heavier you don’t need to carry so many, but if you really want to get silly a 3-round mag extension is available, giving a 13-rounder. It’s a bit like the bastard child of Mr & Mrs Bren gun magazine! But given most tube magazine extensions on PSG guns are a minimum of 10, usually more these days, then the HDM needs to stay competitive! Saying that, it’s a bit long if you have to go prone.

The Escobar has a 3-inch chamber and is only available in 12-gauge, but seemed to feed most shell lengths I used easily. Filling the high cap mags is a bit of a thumb buster as they stack up towards the end, but the ability to quickly slap in a full mag, as opposed to fumbling with loose ammo brought a smile to my face.

Loading is pure AR15 – lock the action open using the hold open catch and push in the mag until it locks, then press the bolt release to chamber the first round. When the mag is empty, the bolt automatically locks open. Unlike an AR, the magazines do not free fall out but have to be pulled. I traced this to the hinged, holdopen actuator at the rear of the mag platform. The fives pulled out easily enough but the bigger 13 barely dropped and required more effort; not stiff, just cumbersome!

The Escobar ran reliably, shooting 70- to 76mm bird and buck shells easily enough, also slug, but that proved livelier. The trigger was a bit heavy and I had a few stoppages with the 13-rounder, but that seemed to run in as it smoothed up after a few boxes. Taking the mech down showed it has a self-regulating system, so should be agreeable to most cartridge types, apart from the really light stuff. In truth, the iron/plastic sights are a bit superfluous for most PSG shooting, which uses birdshot, as they tend to obscure the target.

But for slug work, do the job; though I’d prefer a compact red dot sight, I fitted a Vortex Razor 3MOA unit, which proved ideal! Strip down is a bit fiddly – lock the action open and unscrew the forend cap and remove the forend retaining plate. Now pull off the forend to reveal the gas system. There are two caps, the front (smaller) one retains the gas system and the larger one behind is hollow and is the top section of the self-regulating mechanism.

Both proved hard to move due to fouling and the larger one also has a spring pushing against it. A squirt of lube before you start is advisable. With these two removed as well as the spring, the barrel can be pulled forward and off and the floating piston in the gas block removed. Press the bolt release and allow it forward under control and pull out the cocking handle. Moving to the left of the receiver, rotate the stripping catch from its 2 o’clock position to 6 o’clock and hinge the action open, then slide out the action rods and bolt/carrier assembly. On reassembly, the only hassle I had was trying to compress the regulator spring with the cap, as there’s not much to get hold of. I found pushing down with a spanner gave me enough distance to engage and rewind the thread.

I have to say I like the HDM Escobar and had a lot of fun with it and would have loved one in the glory days of PSG. Not saying it would have made me a better shot but who cares, as back then we shot it for the fun of the discipline, or as a friend of mine described PSG: “It’s the most fun you can have with your clothes on!”