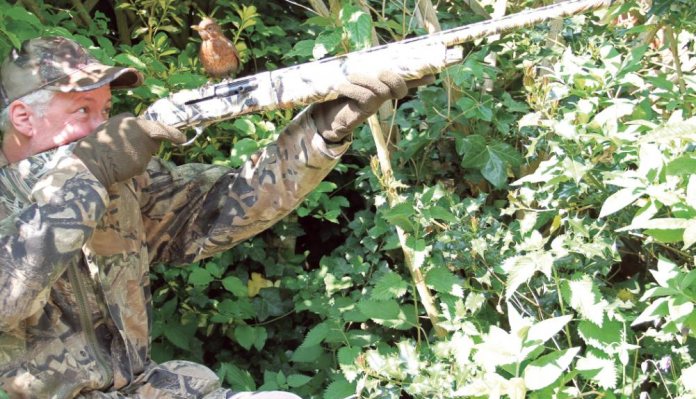 Range Right Ltd. bring in the Huglu range of both over/ under and semi auto Turkish shotguns. The semi-automatic range is split between blued steel and walnut stocked versions and those shod in camouflage. I had the Huglu GX 512 model in camo, which is a gas-operated, semi-auto with synthetic stock and comes with an ABS case and six flush-fitting chokes and one extended. Best of all is the price of £475, making it very affordable indeed.

First impressions are usually what count, and as many a Turkish shotgun that turns up for review, it is difficult to see how they make the gun for the money. The GX outwardly looks like any other semi and it is really, but it does feel very solid, without excess weight and all the workings seem similarly well-made.

What strikes you first is the camo clad appearance, which in Mossy Oak Shadow grass and is probably my favourite finish. It really does look natural with very good contrast between the long winding blades of grass/reeds, intertwined with a background of small grasses. You also have a shadow black to some of the blades, which really does make the finish look 3D, which is exactly what you want.

The butt section of the stock has a length of pull of 13.75-inches, which is a bit shorter than a double but common to semis that will find their way into tight spaces, such as pigeon/duck hides.

The pistol grip has moulded in stippling instead of chequering, which is better and offers a good grip, as it also has a good palm shelf to both sides. There’s a raised scallop in the stock that supports the soft part of your thumb, stopping it slipping.

You also have a solid black rubber recoil pad with deep ribbed profile that reduces recoil but can catch on the jacket as you mount the gun; so, maybe a bit of insulating tape to the top tip. The forend is 12-inches long and again has the moulded in stippling, with a subtle forwardslanted finger ledge for the supporting hand to grasp better.

Overall, I really like this stock; it has a good solid feel to it, not at all hollow, with a nice grip and really good effective camo cladding.

The Huglu GX comes with either a 28- or 30-inch barrel in only 12-gauge calibre. I had the 28- inch tube, which is high-tensile steel and chambered for 3-inch 12-gauge shells. These barrels have the Fleur de Lis proof markings, so good for steel loads too. This has also been thought about with the choking system, as there are six that comes with the gun- nice one! The usual complement of cylinder to full and one extended 0.020 Modified that sticks out of the muzzle by ½-inch and is good for patterning steel loads.

This 28-inch barrel is similarly camo clad as the stock and neatly done too, with an 8mm top rib with 8 large vents beneath for ample cooling. To sight or lead the eye, is a single red Day-Glo bead at the muzzle.

The barrel is secured to the magazine tube by a large, black knurled ring that needs to be removed to lift off the barrel.

There are twin steel action rods/bars to the piston, which is well polished and 1.25-inches in lengthened then two split rings gas seals. These rings catch the expanding gases from the twin ported barrel after firing a round and was very easy to clean.

The alloy action construction keeps the weight down and strength up and again camo clad and with a nice rounded end of the action top but not drilled or tapped for a scope mount. The ejection port is quite wide and high to facilitate an easy ejection and this is done by the small ejection spur in the action wall as the bolt is cycled backward.

The bolt body is blacked and blued as a contrast to all that camo and has the Huglu logo embossed onto it.

There is a single claw extractor, which dealt with all the ammo tested. For easier functioning and loading, the bolt handle is 24mm circular/ hollow and extended and the load ramp is blacked, vented and has plenty of room to load a shell. A small inset button to drop a round from the mag for an instance reload if you like.

There is an enlarged bolt and load ramp release button to the right side for easy use, even with gloves on.

The trigger is smooth and blackened and quite heavy but crisp enough at 5.5lbs weight and there is a simple cross bolt safety to block the trigger blade movement.

I had no issues at all, everything functioned as it should, it loaded, fired and ejected without fault and threw some nice patterns.

Due to the price and tough camo clad finish, it is nice not to have to worry about scratching or resting on wet ground, so you can just concentrate on hunting.

As usual, I fitted the ½ choke but this time the extended version and set up the pattern boards at 30-yards. Being a pigeon or duck gun, I started with a few good pigeon cartridges and one steel load.

First up, were the Hull Steel Game Extra, so no more than ½ a choke size for steel shot, due to their harder surface. This is a 70mm black case with high 20mm rim and is designed for shotguns proofed to high pressure steel 1320-bar.

I had the 32-gram load of FE3 shot size 3.6mm load that held approx. 180 pellets. This gave a total pellet strike of 152 pellets, distributed 79 inner hits to the 15-inches and 73 outer, so really well distributed but a little high due to the lighter, fast steel shot.

A good pigeon load is the Hull Superfast Pigeon, which is a high-performance Pigeon load with high velocity, more effective range and harder hitting potential and is marketed especially as semi-automatic friendly.

Velocity is reputed to be 1425fps, so good for pigeons over decoys. I had the 70mm fibre wadded case that held 29-grams of No. 6 shot, a plastic wad is also available. I had a total of 231 No. 6 shot within the 30-inch with an even spread, where 151 pellets were in the outer sectors and 80 within the inner 15-inch circle. They cycled extremely well and gave lovely patterns, a good all-rounder this one, also good for pheasant.

The Eley Grand Prix HV were also good patterners and just shows even cheap guns can pattern well when fed the right diet. I know they are a bit old fashioned and have been with us for years but the new components still make them very good performers out in the field. I had the 32-gram, No. 6 round load, so good for pigeon or pheasant alike, crows rabbits, you name it really. At 30-yards, I had a total of 202 pellets hit the board, with 128 outer density spread and 74 inner circle hits with no holes. An oldie but goody in my book.

In testament to how good the Mossy Oak Shadow Grass camo clad Huglu was, I was in a bush on the edge of the farm, waiting for squirrel with the camera set on remote for the pictures in this article. Suddenly, a flap of wings and a bird landed directly on the Huglu GX’s action and stared right at me! If that’s not good camo, I don’t know what is!

I liked the Huglu 410 I tested recently and I like this GX semi also; what is there not to like? Its good value, its reliable, it shoots great patterns and that camo cladding is very effective, ask the bird population! I have had some Turkish semis that were a bit iffy but this Huglu is not one of them; it shoots better than its price tag would suggest.