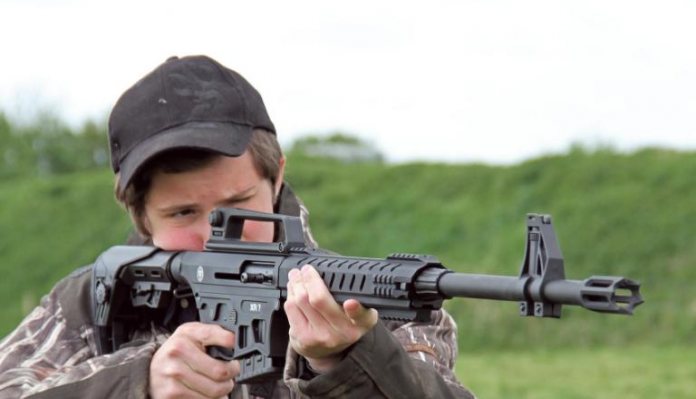 Not my normal fare, but a type of shotgun that is gaining in popularity at the practical shotgun shoots that are more mainstream these days.

There is no doubt that the AR15 type platform has spurned many a rifle copy over the years and this has transferred to the shotgun scene too. Range Right Ltd. import the Huglu range of shotguns and this 12g semi is very much in the Tactical style and functioning bracket.

The XR7 has various guises with differing lengths, finishes and sight options, as well as FAC options with short barrels. It is a gas operated, semi-automatic shotgun that uses an exoskeleton of aluminium with removeable open sights and Picatinny rails to maximise the sighting options. The detachable box magazine will appeal to practical shotgun shooters and it all come in its own ABS case with hat, sling and three magazines, all for £695!

Despite its size, it’s not that heavy and is actually quite wellbalanced, which gets better when a full complement of 12-gauge shells is loaded into the magazine, as it centres the XR7. It follows your typical AR15 or M4 platform, in as much as it has a pistol grip, retractable butt stock, elevated handle come rear sight and detachable magazine with a plethora of aluminium rails. I can’t say it’s my style, but it is well executed and overall finish is good.

The main chassis system that the barrel and stock bolt to is made from aircraft grade aluminium, but the action is made from 7076 steel for strength. The top of the action on this model has a Picatinny rail, so that the ‘AR15’-esque carry handle could be taken off and a scope or red dot sight attached. The bolt itself is large and has a nice polished blued finish and extendable bolt handle that is hollowed. The extraction is good with large claws and the bolt holds open on the last round.

There are three securing cross bolts that secure the ‘upper’ to the ‘lower’ and the rearmost can be removed to allow access for cleaning and stripping. The lower chassis has a perforated design around the magazine well that looks good and sheds a few ounces too. The magazine release button is on the righthand side, as a small dished form and on the left side is a toggle type override to release the bolt.

You have to give the button a decent push to release the magazines, as they are held quite firmly but after a few boxes of ammo it either loosens up or you get used to it. Also, on the left side of the action, is the characteristic safety switch. Horizontal and the XR7 is on SAFE and in the vertical position the Huglu is ready to FIRE.

The trigger is smooth and quite small and, typically on this type of semi, is heavy; the scale fell at 6.55lbs but, as with all shotguns, in the heat of the moment you will not notice this.

The pistol grip has the usual upright gait and flat rear section with a ridged front that has two finger ribs/rests to aid in good grip. The semi-panelled rubberised sides also gave an assured grip if sweaty or wet.

The butt stock section is held to the action via a central threaded spur that can be removed and exchanged for an aftermarket alternative if you like. Actually, the XR7 stock has all one needs anyway. It’s adjustable for length of pull and cheekpiece height. Below the central supporting arm is a nylon/ plastic sprung lever that can be pushed up to release and the separate butt section can be slid fore or aft to increase or decrease the length of pull. This helps for quick use on the range as short as possible and when fully extended, 15.25-inches, it is great for a precise slug shooting session.

You also have a cheekpiece that sits flat to the central stem but a turn wheel on the right-hand side allows it to be elevated 1.5-1.75-inches. It’s a bit thin but does support the cheek and, coupled to the extension option of the butt, allows a good choice of options to suit your build or style of shooting. To finish off the butt, there is a wide, black rubber recoil pad that has very defined ridges for good grip to the shoulder.

The forend is quite interesting, as it surrounds the barrel and houses the gas piston operating system inside. The forend is a part grip and part attachment station. You have a secure fitment to the action spur via two securing Allen screws and on top there’s a short Picatinny rail. On the sides are 10 upper and eight lower slanted vents to each side for cooling and the forend section slightly swells to accept four short Picatinny rails for lamps, red dots lasers etc. In front of this, is the end cap that retains the innards of the operating system that can seen through the forend vents.

Gas is bled off the barrel and captured in the piston that is forced rearwards with the pressure and the articulating rods thus operates the bolt to cycle the action.

The barrel is 24-inches on this model, but you can have longer or shorter as you wish, or FAC certificate allows. It is bored cylinder i.e. true for slug use, I guess, which is sensible, especially at the ranges such a shotgun might be used at.

There is a very large muzzle brake fitted that has huge vents and claw like extensions at the end, very formidable but not very practical but it does unscrew.

Sight-wise, you have a foresight that fits via a collar around the barrel with two Allen screws to tighten. It is tall to line up with the rear sight and has an adjustable height bead in between two protective ears. The rear sight is operated via a thumb wheel set into the rear of the carry handle on top of the action and adjusts the sight for shot placement.

Finally, the magazines, which are single stack versions of 2-, 5- and 10-shot, the latter being a banana style. They are metal with synthetic followers.

As I stated earlier, the XR7 fully loaded is actually a nice handling gun with quite good balance. It is important to note that with the sights high above the barrel that point of aim is very different from that of a conventional shotgun. You need to raise the aim via the sights. I shot three pattern boards at 30-yards and all I succeeded in doing was plough a furrow in the field, it was so low! Duly corrected I shot a couple of bird shot and slug loads through the XR-7.

It has to be said that it is a bit fickle with the loads it likes. 28-gram and below and I had a few non-cycling of the bolt. However, stiffer loads were no problem at all and after a few sessions, things did loosen up a bit, for the better. Recoil is well dampened on firing and a second, third or four etc. shot is easily corrected for in the aim.

At 30-yards, the cylinder choke spread the Hull High Pheasant load of 32-gram No 6. shot as you would expect. I only had about 60% of the original shot weight hitting the board. It was well distributed but too thin and no surprise its not a game gun!

So, on to proper ammo for the XR7, slug, where I used my go-to, all-round slug, the Winchester, which is one of the better Foster type slugs, as it has a better overall diameter to the cylindrical slug that matches better to a 12-gauge cylinder choked gun. At 25-yards, I had key-holing groups of three and light recoil it has to be said. At 50-yards, groups were around two-inches, so no problem for some steel plate challenges.

The Brenneke slug from RWS is expensive but very good and I had a tighter fit all together and groups at 25- and 50-yards were 1- and 2.5-inches respectively. The Lightfield hybrid shot is superb in a rifled shogun barrel and this semi sabotted slug type shot one big hole at 25-yards and 1.75-inch at 50-yards.

An unusual looking and functioning 12g shotgun that will certainly appeal to the growing trend in practical shotguns of this type. The overall quality was good, as was the function. The magazines were fine and quite easy to remove and after a sight adjustment the slugs and centralised shot patterns were aligned. You have quite a few options with the Huglu XR7, including some nice colour options and a sound moderated version (that I’d like to test) would be a good gun also.