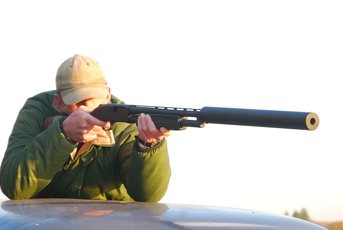 Several years ago I was fortunate enough to test a moderated Mossberg pump action .410 from the Saddlery & Gunroom. This company specialises in moderating smooth bores – single or double barrel and pump-actions, as they take the basic gun, port the barrel and then fit a dedicated moderator. I liked it so much I bought it and this very quickly became my primary rabbit gun off a quad bike. Although looking long and clumsy everything seemed to come together when shooting in this way, which is a very different form of pest control and can install bad technique.

The only limiting factor with the .410 is effective range, most warreners will know that cleanly shooting broadside, running rabbits out to 35 meters is a doddle. But for sitters, or ones running away it’s not so easy. On some of the ground I am responsible for the rabbits were understandably becoming rather jumpy! Especially as I had to go out on nights which were far from ideal, no wind, bright moon and so on. But I had little option as I had to stop their predations…

Also in East Anglia we have huge populations of hares which cause serious economic damage to arable crops, the old saying is;  ‘seven rabbits or four hares is equal to one sheep eating crops off’, so imagine what happens to a 40-acre field with 10 or 20 rabbits round the edges and over 100-hares feeding all over! The end result is the same - one irate landowner! Understandably the .410 is not quite enough gun for these situations, I have used the 12-gauge version but was not struck by its overall length and have said to friends for years what was required was a 20-bore, which is what I have here.

At first glance the Mossberg with something that looks like a drainpipe for a barrel appears to be cumbersome, only when handling does the shooter realise what a little cracker it is. The overall length is 54 1/2”, with the can contributing 19 3/4” to that, though it comes back over the barrel down to the magazine tube. The butt is 13 3/4” which for long armed shooters like me is too short, but it’d not a problem getting an extension pad to add more length.

Apart from the big can the gun is a standard Mossberg 500, with a plastic tang-mounted safety catch (metal would have been preferable) and a crisp trigger. Butt and forend are in a tough black plastic with a rough finish to provide grip. Underneath the moderator is a 24” multichoke barrel which comes as standard with Full choke, my advice is to get Half as Full is a little too tight. The first night out I found that one could easily miss rabbits at 35 meters and punch a hole in the ground next to them the size of a small orange, and the ones shot at close range were hard hit. Not important some might say, but considering we are getting between 50 to 90p per carcass, having to throw away hard hits ones is annoying, likewise hares that around a fiver each.

Shooters are advised to use fibre wadded cartridges, as the petals on the shot cup of plastic wads could get caught in the barrel porting. If this has happened news has not reached me yet, but it would give cause for concern when one thinks about firing into a blocked barrel. Anyway we should be doing our bit for the environment and livestock farmers will not thank anyone for leaving their fields scattered with plastic shot cups for animals to swallow.
Long term testing

I have been fortunate enough to have this shotgun for several months, and what a cracker it is, using 25 and 26-gram loads of #5 or 6 shot has proved deadly for rabbit and hare alike. A close range fox even succumbed one night when shooting from the back of a pickup truck despite several rabbits having already been shot on the field. This leads me on to noise, yes there is a subdued cracking sound on firing but certainly no loud bang meaning rabbits and people alike suffer less disturbance. I have tried normal cartridges and sub-sonics and to the human ear at distance I could ascertain no difference, but the subs did not kill as cleanly due no doubt to their reduced velocity.

At sensible distance of 40 meters or less this 20-gauge is a very capable gun, again from the back of a truck we were shooting rabbits lying in fields one night with no problems in achieving clean kills. As any experienced rabbit shooter knows these are some of the hardest shots to achieve a clean kill with! The furthest one paced out was 42 meters however they averaged at 34, the half choke combined with 25-gram #5s proved to be more than adequate.

In the early summer I was called in to control rooks on some maize, the plants were just emerging from the ground and the rooks went along pulling each one up in the rows. This meant starting at first light and as there are homes near to one of the sites I went for the quiet option. I am glad I did, though shooting flying targets takes some getting g used to with the Mossy! But once you get it together it’s very satisfying. After three hours I had shot just under 60 corvids and 10 pigeons for just over 90 cartridges fired, pretty good for me!

Twice now I have mentioned there is a different style of shooting required when using these silenced shotguns.  By this I mean one literally pokes at the target with little attempt to swing through or use maintained lead as, as with me, it seems to induce missing. This style takes a lot to get the hang of but when you get on you will surprise yourself, however, you’ll need to readjust when going back to a normal shotgun.

My final thoughts are that if you need a quiet shotgun that is capable of shooting quarry cleanly at sensible distances then this is the gun for you. For the professional pest controller the Hushpower should be given very serious consideration as it is an excellent tool for specific jobs. Having thoroughly tested this gun and considered all its points I have only come to one conclusion, I shall have to purchase one as they are well worth the money, well done Saddlery & Gunroom for putting together such a sweet package of the 20gauge Mossberg and Hushpower moderator.

The Mossberg Hushpower range is available in 410, 20 and 12-bore. You can buy the basic, moderated gun or get the kit that comes with a spare, full length ported/multichoke barrel so giving the best of both worlds. All guns come in the choice of Section 2 (shotgun) or Section 1 (firearm) capacities.