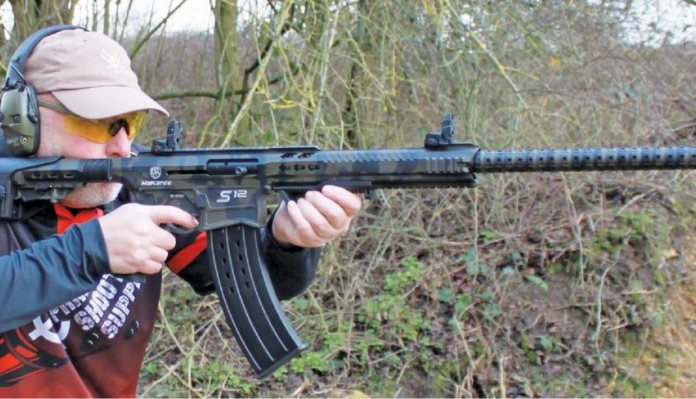 There has been a relative rash of semi-automatic 12-gauge magazine fed shotguns reaching our shores. Quite a few come from Turkey and the Balikli Makarov S 12 is one of those. Turkey has a long-established firearm’s manufacturing base. I own Turkish firearms and many, many airguns from that country, they make quality gear. Magazine-fed shotguns are, very popular in practical shotgun competitions. That’s what I use mine for, they have the advantage of the user not having to spend hour upon hour practicing manual reloading or learning new techniques as they are always evolving, not to mention having to buy the latest method of carrying the shotgun cartridges in a way to suit the new manual re-loading method. With the magazinefed guns you just need to have a belt system to carry the magazines and that’s really it.

The Makarov S 12 is an impressive-looking shotgun. The one I tested came in the cool-looking black and dark green camouflage paint pattern. The gun is very good value for your money. You get a hard case with two, yes two 10-round magazines. Other makers make the shooter stump up for another magazine if they want two. But two magazines is not all you get, they also give you an orange breech flag, Allen keys and a barrel spanner. Plus, you also get a full set of choke tubes and an instruction book. That’s not all, the S 12 is fitted with open sights, and not fixed ones either. The front and rear sight fold down and, lastly, they throw in an A2 raised rear sight/carry handle. Wait, I also forgot the front angled grip fitted already to the underside of the forend, essential to control this beast of a gun. You really get your money’s worth with the Makarov.

The S 12 looks like an AR, it even splits apart with an upper and lower part of the action with the same two pins. Taking the rear pin out the upper action tips up from the trigger mechanism. On ARs you can now take the bolt out of the back of the action, not so on the S 12. There is no opening at the back to let the action out, you can blow or wipe out the moving parts but to take the bolt out it means stripping the action from the barrel end. For the UK the S 12 has a 24-inch long 4140 stainless steel barrel – they do supply a full set of chokes. The action is made out of lightweight magnesium/aluminium 7075-T6 alloy and they state it is made for 70mm (2¾-inch) 76mm (3-inch) shotgun shell cases from 28- to 52-grains of charge.

On getting the gun out of the hard carry case you realise it really is a beast of a gun. I had the green and black camo model to review but is also comes in full black or full green. The 24-inch long barrel extends 330mm from the front of the action. Around the steel barrel is a barrel shroud, this actually holds the forend on and screws tight against a collar in the forend. A single 3mm Allen screw clamps the rear of the forend to the action. Then there is a barrel nut ring that Balikli have given you a spanner for. Take the barrel off and everything can be stripped out of the front. Reverse the process to re-assemble. All of this takes a lot of time so it’s not a quick task to do a deep clean.

The end of the barrel shroud is shaped with pointed scallops forming a door breecher shape. The forend has a Picatinny rail running the full-length underneath. It also has 50mm long sections on each side and the top. The front folding sight fits on the top one. It also has rows of three KeyMod holes on the rear of the forend, left right and top.

As for the functionality, it is very AR-like. There’s an ambidextrous pistol grip and extending rear stock. It has four detents that extends the length of pull 350- to 430mm. It goes further as the rear stock also has an adjustable cheekpiece, this goes up and down by 25mm. The stock has a rubber buttpad, which is useful as the S 12 shoots big cartridges very fast.

It does not have the central two-fingered bolt of an AR, a single extended bolt handle comes out of the bolt on the right-hand side. The manual safety catch is only on the left-hand side, horizontal up position for safe and vertical down position for fire. The 10-shot magazines are easy enough to load.

I shot the El Presidente drill with the S12 (three targets, two shots on each magazine change then two more shots on each). I did it in 5.98-seconds, 12 shots and a mag change in less than six-seconds first time shooting it; the Makarov is a quick gun! As with all semi-autos you need to fine-tune it to the ammunition. It liked the Practical Shooting Supplies practical shooting ammunition. They are 67mm long. The box magazine is designed to take up to 76mm long magnum cartridges, so it does not like the shorter 63mm shells. Also, as with all semiauto shotguns, don’t try using anything under a 28-gram shell. It needs a powerful cartridge to move the bolt backwards, it also says so in the manual, it recommends 28- to 52gr.

The massively long MILSTD- 1913 Picatinny rail on the top of the action will accommodate any range of sight you wish to use. The rail is 265mm long with 205mm of that on the action, the rest on the top of the hand-guard. Of course, it does not have any form of bead sight on the gun, this is a purely practical/tactical shotgun, as mentioned before, in that it comes with open sights with a few options. The A2 rear sight looks good on the gun but I left it with the folding sights on and tried shooting like that, as well as with the red dot sight.

For range testing I fitted a Barska red dot, a set of three steel poppers proved a great testing target. Switching to the open sights it still proved accurate. It has an indented wheel for windage, the front post is adjusted up and down if you have an AR front post tool. It is a last shot hold open weapon; the bolt release catch is on the left.

Overall, I was impressed with the S 12, if you are looking for a mag-fed shotgun that will not cost you an arm and three legs, then the S 12 is one to consider. The price is real value for money and black and camo ones are only £735, whilst the green is £760. Coupled with the three-year warranty, you are onto a winner.

Thanks to Richard at Practical Shooting Supplies for help with production of this article.