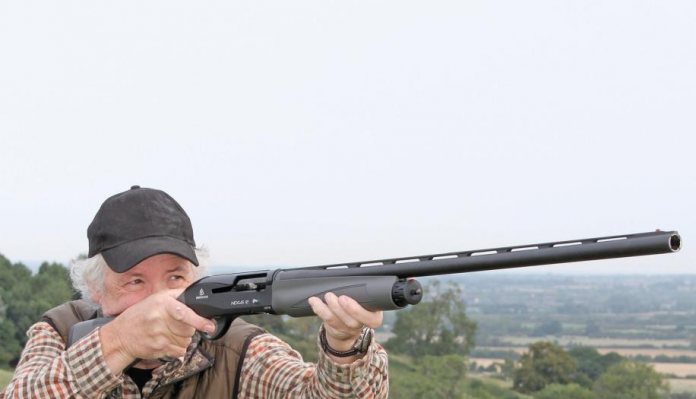 I liked the Marocchi First O/U that I tested last year and now it is the turn of the new Nexus model, which is a semi-auto shotgun. It has a classical semi look to it with a slim and swept back action, a satin smooth blued barrel and satin/polished black action. The nice feature of this model is the polymer synthetic stock that has a greyish/green colour with soft touch finish and sure grip cheekpiece.

The Nexus uses the inertia operating system that is good for medium to heavy loads when the gun is shouldered and comes with five chokes (the test gun’s were missing) and has a 76mm 3-inch chamber.

I like the stock; it has no cast at all but does come with additional spacers to alter to your preference and body frame. These, like the chokes, were missing in the test gun but these would allow a good degree of ‘own fitment’ to best align the eye down the rib. The stock is also fairly ambidextrous also, with no palm swell to the pistol grip and a low, straight comb. The length of pull is 14.25-inches and the pistol grip is quite short, like a lot of semis, with impressed chequering that is more of a ‘dimple’ profile. The stock, as with the forend, is made from a strong polymer in two moulded halves with a greyish/ green colour, which I really like.

It has a nice soft touch finish that gives extra grip and a warm overall feel. The top of the cheekpiece also has a small thin inset on top; this is black rubber that wraps over the top of the stock and, being rubber, it has a more tactile and grippier feel, even than the soft-touch finish of the stock.

To finish it off, there is a moulded-in sling swivel eye for sling fitment with a metal version in the forend end cap. You also have a black, soft rubber recoil pad with chevron profiled surface for grip but it allows correct shouldering too.

The forend is 10.5-inches long and has small, tapered, chequered patterns like the pistol grip and the same soft-touch finish. Grip is also gained from the typical bulged profile that forms around the magazine tube and thus fills the palm of the supporting hand.

A well-designed and comfortable stock that is both good looking and practical and transfers the recoil away from the face.

This model wore a 30-inch 12-gauge barrel, although 32- inch versions are available. It is a multichoke barrel and chambered for the 76mm 3-inch rounds and steel proofed, so good for pigeon to Goose. Marocchi make their own barrels and attention to detail shows in the pattern board tests; they are chrome lined also for uniformity and longevity. One interesting point is the chokes are made with the same steel as the barrels, so 100% compatible. This test gun only came with ½ choke fitted, although five and a wrench come with a new gun.

There is a 7mm rib that has the serrated surface finish to reduce glare and culminates at the muzzle with a single red Day-Glo bead 1-inch from the muzzle before the rib swamps down. There are eight identical vents below the rib and the overall finish of the barrel is a satin black blued surface; this is practical and also complements the dual tone action finish and stock, it also looks pretty scratch resistant too.

The action is made from 7075 T6 aluminium, so it’s light yet strong and able to cope with the repeated cycling of the bolt and able to handle even those big 76mm loads. It has a good finish too, with the top half being polished black anodised and the bottom section left satin black. The top half also has twin dovetail rails of 11mm for a red dot or scope, popular for slugs and boar in Europe.

The bolt is equally well appointed with a highly polished blued finish and small, smoothedged bolt handle. Despite that smooth finish, it still grips easily. The bolt is a two-section system with the front half being a separate rotating head; this locks twin large lugs into the barrel recesses after about a 20-degree turn. Extraction is maintained by a single claw extractor in the bolt head and cases are ejected by the traditional spur inset into the inner wall of the action.

You also have a cocked indicator that falls just in front of the trigger guard to the right with a red dot to show the Nexus is cocked and ready to fire. The trigger guard is again typically polymer and better for it, as it will be rested on soil or damp ground in field use and so will not rust; it does however have an odd grooved profile and bulbous look, which a lot of Italian semis tend to have these days.

The magazine follower is a polished steel affair and vented to reduce weight and is operated or unlocked, as is the bolt, by a small button on the right side of the action.

The trigger is a blued steel unit with a curved profile and smooth finish; it’s actually not too bad for a semi and has minor creep and a weight of 5.35lbs when tested. The safety is a cross bolt affair, sited in the rear of the trigger guard, pushed left is fire and to the right makes the Nexus safe.

Semi-autos of all types tend to like a stiffer payload to function correctly and especially an inertia type operating system and the Nexus was no different. 28-grams and above were no problems at all; below this, a few ejections but none cycled rounds. However, as with all new guns, things loosen up and so a run-in period is recommended to ascertain the lightest load to use. I only had a ½ choke with the Nexus, so I used this on the pattern boards at 30-yards.

The first up, was the Eley Grand Prix HV cartridge, with its No. 6 shot size and 32-gram payload. I had a total of 247 pellet strikes, with a distribution of 85 inner hits within the 15-inch circle. The remaining 162 pellets spread across the 30-inch circumference. This load spread very evenly indeed and would be a very good all-round, do any game load.

For a good Pigeon load, the GameBore Clear Pigeon is always a consistent performer. I used the 30-gram fibre wadded load with No. 6 shot and had a total pellet strike of 134 pellets, a bit sparse but nice and evenly spread again; it just shows that you need to shoot every load on boards to see what really happens.

The inner hit rate was 76 pellets and the rest, 58 pellets, around the circumference. The Clear Pigeon functioned perfectly and gave noticeably less recoil and so again a great Pigeon load for shots over stubble when a high volume is common.

Finally, the Hull High Pheasant Extreme with a 32- gram load of No. 5 pellets in a 70mm cartridge size. Stiffer recoil and good ejection and a superb pellet distribution form the Marocchi Nexus barrel.

I had 78 inner strikes and 121 outer hits, so a total of 199 Pellet strikes, a really good hard-hitting load for pheasants, ducks or even pigeon.

I like the simplicity of the Nexus and that’s not a flippant comment; sometimes, just good design is all you need, without extras you don’t. It handles and points very well, especially with the 30-inch barrels and recoil was mild, even with heavy loads. The stock not only looks good, but the colour is nice and that soft touch finish offers real benefits.

On the pattern boards, the Marocchi performed very well and, as with its O/U brother, shows those Italian barrels are well made and throw great patterns, which, at the end of the day, is what a shotgun is all about.