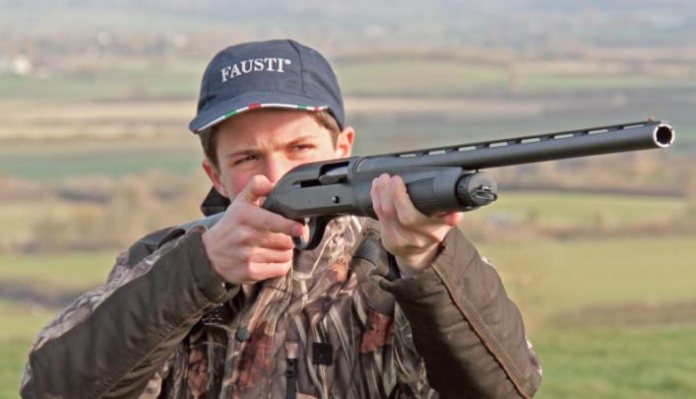 Marocchi are making a real point of offering great guns at a realistic price point that will appeal to a wide range of shotgun shooters. Often, the semi-automatic shotgun gets a bad press amongst traditionalists; I love them, and I really like the simplicity of a good recoil or inertia operated 12-gauge. This Marocchi XTR is one such semi, built around a lightweight alloy action with multi choked barrel and synthetic sporter stock, the inertia system is reliable. This XTR is a rugged semi that can be used for rough shooters, wildfowlers or clay shooters alike and will certainly appeal to smaller-framed shooters, due to the lighter recoil.

The overall look of the XTR is one of subdued, yet purposefulness elegance; it is all black and the stock is a big part of that. It has a typical Sporter type trim with a small amount of cast and despite being a right-handed gun, the low comb allows use in both shoulders from a hide if necessary, to get the job done. Length of pull is 14.5-inches, which is a good length for a semi, allowing smooth shouldering and a natural hold to the XTR without fatigue.

The pistol grip has no palm swells but its nicely curved rake feels natural to hold and the moulded in diamond style chequering works well. This is actually enhanced and works because the whole of the stock is covered with a soft-touch black finish that gives an overall tactile feel. Along the comb, is an inset rubber black strip five-inches long that not only cushions the recoil to the face but provides the correct cheek weld for correct eye alignment. The overall finish is hunter-friendly, and that soft-touch is appreciated in the cold weather, as it is less cold than a standard plastic stock.

The stock is a moulded construction, as is the forend, made from a strong polymer in two moulded halves that keeps it lightweight, but it feels very solid, without added weight, a good overall ratio. The recoil pad is huge and a full 1-inch of soft, tactile black rubber to absorb any recoil from stiff loads. It can drag a little at the top when you shoulder sometimes but a small piece of electrical tape smoothes that out.

To finish it off, there is a moulded in sling swivel eye for sling fitment, with a metal version in the forend end cap. I like a sling on a semi, as carrying decoys to a hide or picking up geese on the marsh allows the shotgun to be slung but still handy if something else flies over!

The forend is 10.5-inches long and has the small chequered pattern and finish as the butt stock, not complete coverage, some underneath might be nice but that softtouch almost negates the need for chequering anyway and there is the rounded profile that fits around the mag tube for a good grip.

It’s a good stock; no frills but all you need and feels very comfortable and able to take a few knocks too.

I had the 28-inch barrels, which are really about 27-inches end of chamber to muzzles. They are multi-choked and supplied with four chokes and chambered for the 76mm/3- inch rounds and steel proofed, so good for pigeon to goose.

Marocchi make their own barrels, which I have mentioned before and, as such, their chrome-lined barrels give uniformity and longevity. The chokes are made with the same steel as the barrels and as such are 100% compatible.

There is a slim, 7mm rib that has a shallow, serrated surface finish to reduce glare and a single red Day-Glo bead 1-inch from the muzzle before the rib swoops down. There are eight identical vents below the rib and the overall finish of the barrel is a satin black bluing. The rear tang of the barrel, which holds the locking abutments and ejection spur, is highly polished and blued, which makes sense, to allow a slick movement and stop debris sticking.

The action is very nicely profiled and looks smart with its allover satin black anodised finish and the top has a 5.5-inch dovetail for scope mounts for red dot or scope use, doubling the usefulness of the XTR.

It’s a strong, yet light action, being made of 7075 T6 aluminium and will handle all heavy 76mm loads and countless lesser rounds for a long reliable serviceable life.

The bolt is typically Marocchi, with a highly polished, blued finish and medium length serrated edged bolt handle. The bolt is a two-section system with the front half being a separate, rotating head. This locks large, twin lugs with rounded profiled tips into the barrel recesses/ abutments after about a 20- 25 degree turn. Extraction is via a large, hardened single claw extractor in the bolt head and cases are ejected by the traditional spur inset into the inner wall of the action.

You also have a cocked indicator that falls just in front of the trigger guard to the right with a red dot to show the XTR is cocked and ready to fire, a feature of this and the Nexus models. The magazine follower is a polished steel and vented to reduce weight and is operated or unlocked, as is the bolt, by a small button to the action on the right side. The trigger is a blued steel with a smooth, curved profile that has a very clean break on the scales at 5.15lbs, with little or no creep, not bad at all. The safety is a cross bolt affair sited in the rear of the trigger guard; pushed left is fire and to the right makes the XTR safe.

As with any inertia or recoil operated shotgun, the load weight and how you hold the gun influences how the action cycles. You need a solid or defined object i.e. shoulder for the inertia system to act upon to cycle the action reliably. Loads from 28-grams and above proved no problems at all but below this I had the odd non-eject.

First up and with the ¾ choke fitted and tested against pattern boards set at 30-yards. The Hull Imperial Game is a great load, but its 26-gram load struggled to fully cycle the action all the time but shot nice tight patterns of a total of 200 pellets dead. There was a bias right high, due to the very strong winds and I had 135 outer strikes with the No. 6 shot and the remaining 65 pellets in the inner circle.

Next up were the Special Pigeon load with its 32- gram No. 6 make up. Perfect functioning and little recoil too. I had 208 good pellet strikes with the ¾ choke and distributed 147 outer and 61 inner strikes. A great all-round load and perfect function in this semi.

Last, were the Clear Pigeon loading of 30-grams No. 6 and again super slick function and good patterns. 71 inner hits and 161 other hits on the pattern board for a total of 232 hits, best showing sometimes less pellets but the wad make a difference to the overall pattern.

What’s not to like? The Marocchi is made in Italy and thus holds a good pedigree for quality components that all work together for a reliable and likeable semi auto. No frills but it works with a great stock and good patterns despite the strong winds and proves the point that inertia systems do like a stiffer load. This XTR is a semi suitable for all ages and shotgun duties and is very well priced.