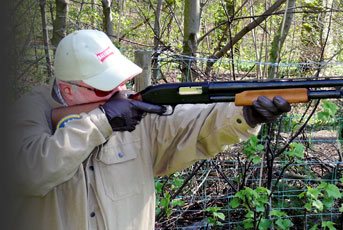 For whatever reasons, apart from military and practical applications the pump-action shotgun has never truly found favour in the UK. However, the Americans have been in love with them since they were invented, Mossberg’s Field Grade 500 pump personifying why. It’s simply because they’re cheap, at heart rudimentary, reliable and will as a rule feed any and all ammunition you care to load them up with.

Like all of Mossberg’s shotguns the 500 pump comes in a whole host of synthetic, camo and gauge variants including the 500 Field spec version seen here. Minimalist in the extreme, even the gun’s cardboard box evades Mossberg’s familiar blue and yellow hue, just gun, chokes, security padlock and owner’s manual contained within.

With a kit as unpretentious as this you’re immediately aware that the 500 Field was intended as a starter gun for an American teenager, or as an out and out worker. Apart from the removable sticker on the stock, you’ll actually be hard pushed to find the Mossberg name, all four surface of the black receiver being completely devoid of any form of adornments to a degree that it would seem even the manufacturer decided that something had to be done to improve matters.

Timber wise, the woodwork fits well with acceptable machine chequering although the internal surfaces may require the odd burr removing. Lurking within the black expanse lies a chrome-finished bolt and skeletal shell lifter with the Mossberg name and model number stamped just forward of the loading gate. By stark contrast the trigger blade is gold plated whilst the base of the trigger group is anodised. Where this Mossberg scores maximum points is in the location of its two controls. The safety is on the tang and well placed for operation by the firing hand thumb with no loss of grip or position. The action release (opens the gun when it’s cocked and chambered) is to the rear of the trigger guard and exactly above the shooter’s middle finger.

Interestingly for a basic gun, three inches or so back from the muzzle eight porting holes occupy each side of the barrel just below the vented rib. A feature usually reserved for more upmarket shotguns, this recoil reducing feature adds considerably to the 500’s ability to handle large magnum loads without causing as much harm to the user as it will to the intended target. A laudable addition on a shotgun of this price, if you intend taking the 500 clay breaking do forewarn your friends, porting causing the infamous ‘telephoning’ effect for anyone stood to the side of you during discharge.

Before I plunge into the actual shooting experience its worth highlighting some serious dos and don’ts with the 500. Firstly, do lubricate the action since most Mossberg’s seem to leave the factory bereft of oil or grease. Secondly, when firing, do make sure you keep your nose out of the way otherwise the back of your thumb will smack it due to the diminutive stock dimensions, even though the barrel porting does dial out a degree of flip and recoil.

Now the don’ts; the main one being to keep the cycle between rounds as slow and deliberate as possible. Next – high brass shells, this particular 500 showed a distinct dislike of them. Taking these two ‘don’ts’ together the reason is that the narrow extraction claw can’t hook onto the wider rim of deep brass meaning it can’t extract or chamber them correctly so jamming the action.

Taking all this into account a change to Express D&J fibrewads was called for in order to continue the evaluation. Leaving the ½ choke in situ, once some favourable ammo had been sourced, the 500 set to breaking clays with reasonable ability, with the typical flat-shooting attitude of all guns of this type coming to the fore. Lining up the two beads in the usual inverted ‘8’ saw most birds despatched. All Mossberg’s pattern extremely well through their short Accu-Chokes. Overall performance is more than acceptable, though what makes the 500 slightly difficult to use is its short butt! With the natural position of the ‘thumb around’ grip meaning the view along the high rib is somewhat obscured.

Conversely, if you hold your head farther back it eliminates the correct sight picture, whilst dropping the butt out of the shoulder pocket increases felt recoil. As to whether the synthetic versions of the 500 come with more user friendly stock dimensions I couldn’t say! But before you went out and bought a 500, please do check the suitability of the measurements, with the current factory offering definitely erring towards the teenager or female shooter.

Most potential buyers of the Mossberg 500 pump will be doing so with a specific task in mind. Probably the most popular reasons would be as a general purpose vermin control or as a knock about gun. Its two main draws are the name and price. What I personally would say is that if you have an urge to own an historic name for a tad over £400 and are prepared to iron out a few teething problems, then away you go. The choice is yours, but for myself there are similar guns at comparable prices that are far better built.

If you’re after a basic multi-shot, the 500 could be it
A serious no frills American shooting iron
As rudimentary as it gets