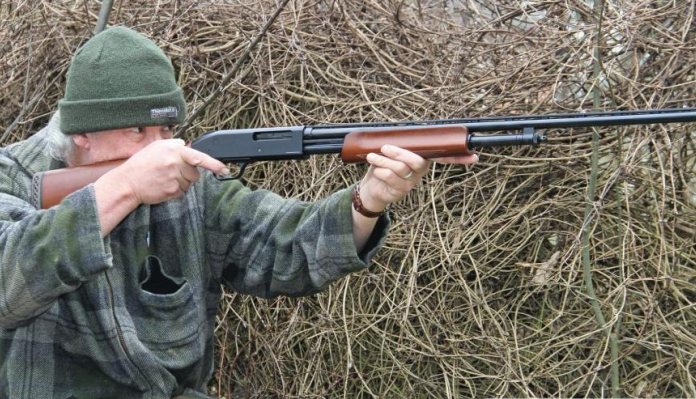 When I think about a pump-action shotgun, I instantly picture either the Remmy 870 or the Mossberg 500, which are both iconic pumps that are still in production today, in one guise or another.

Mossberg’s 500 series is the real backbone of the pump-action design as it has been utilised for so many purposes including sporting, turkey, wildfowl and tactical. There have even been slug and silenced versions.

I usually shoot the Mossy 500 as a fully silenced version as the pump-action configuration and easy barrel replacements afford a very cost-effective and reliable silenced shotgun outfit.

Mossberg pump-action shotguns are available in 12 and 20-gauge but it was the smallest 500 model, chambered in .410, that I wanted to test. It left the factory with no moderator attached and as such, it makes for a really handy, lightweight shotgun capable of all vermin and pest control duties.

In my opinion, you can’t have too many different 410’s, buy one 12-gauge and then use the smaller calibres to really hone your skills. The smaller cartridge creates less recoil and noise while also making a successful hit that more satisfying.

The uncomplicated, almost tactile feeling of a pump-action is reliability personified, and with a full choked barrel, wood stock and great lightweight handling for £402, it’s hard to go wrong with this little Mozzy.

I have always liked the simple nature of a pump-action, albeit not the most elegant of designs. Its functionality and reliability certainly have much to do with their use as a vermin tool, they don’t tend to jam like a semi at the inopportune moment.

Being a .410, Mossberg has sized the action to scale with the cartridge and thus the aluminium action seems small and trim but with thick walls. Let’s be honest, it’s plain, with a black painted finish and slab sides with no decoration except a serial number and cross pins to secure the ejector and trigger mechanism. But that does not matter, you can scratch it and not worry.

The top of the receiver is not drilled and tapped for a scope mount like its larger brothers, which still bothers me as this calibre is crying out for a red dot sight fitment for ratting. Aftermarket options aren’t as good. The action slopes at the rear and houses the sliding safety catch, which is big and heavily ribbed for good adhesion. However, it is a little notchy to use and it’s not quiet. It operates with or without the action cocked and just blocks the trigger blade movement, but that’s all you need.

The trigger mechanism has a good-sized polymer guard and shows a smooth blued blade, which has a fair amount of take-up before the sear is released, but no problem at all.

There is no loading gate as you would find on a semi-auto, just a big hole to the underside of the action itself. So, two cartridges are easily fed into the magazine and then a lifter or carrier drops from below the bolt as you cock the action and a cartridge pops out on to it. As the action is closed, the lifter puts the cartridge into the path of the bolt as it closes, thus chambering the round.

The bolt itself is blued and has two large extractor claws opposing each other. A sprung steel ejector spur is screwed into the left inside face of the action wall and the bolt system runs smoothly on twin action bars fed from the forend.

Once cocked and loaded, the bolt is locked shut until the trigger is pulled. There is a small bolt release lever behind the trigger, protruding from the action, and it can be depressed to release the bolt to unload the shotgun if needed. The actual bolt throw is 4”, it is simple and very hard to jam, which makes these Mossberg pumps so user-friendly, even in the dark. In use, 2, 2½” or 3” shells work remarkably well, try that in a semi!

It is available as a section 2 shotgun, so 2+1 (one up the spout and two in the mag) or alternatively, there is a 5-shot FAC version.

The .410 500 model is fitted with a 24” barrel. This makes it really lightweight and it handles much better, especially around the farmyard.

The 3” chambering comes as standard, but as mentioned, you can shoot any size .410 cartridge with no problems. The full choke is tight at 0.3895” and the barrel has thick 0.12” sidewalls. The rib is quite broad in comparison to the barrel diameter at 10mm, so all you see is the rib and the two sighting beads. There is a white bead near the muzzle and a brass one halfway down the rib when you mount the gun. In fact, it’s perfect as you are not distracted by the arcing curve of the barrel and just concentrate on the sightline.

The finish of the barrel is a sensible matt blue and attaches to the magazine tube by a single protruding collar. It is fastened by an end cap with QD swivel attached.

This model has a hardwood stock, which I prefer over the synthetic as it balances the gun better, plus it is still tough for rough usage. The forend is 8” long and 1.85” wide, with a rounded profile and scalloped finger rail to the top. There is a generous spread of chequering to the underside but it does not protrude enough for maximum grip, this is echoed on the pistol grip too.

The butt stock includes a QD swivel mount and has a slim pistol grip with no cast, plus quite a low comb. This works fine with the sighting arrangement and with the length of pull, which measures in at just over 14”. Overall, it doesn’t feel too small to handle. The large ventilated rubber recoil pad is very grippy and the overall matt lacquered finish is plain but practical.

The gun is light at 6.25 lbs, making it a joy to tout about. The fact it is not a show queen makes it ideal for rough shooting in all weathers. Yes, the action cycling is loud then the report is too, but this Mozzy’s agility and ability to use any .410 load negates those downsides anyway. I shot the short little 2” Eley fibre wad cartridges, loaded with 9-grams of #6 shot at a distance of 20 paces. There were only 23 strikes in the inner 15” ring of the pattern board while the other 43 appeared in the 30” circle. They were quite noisy, as the smaller payload still had a good charge behind it. Going to the Eley Fourlong, which is a 2.5” case, increases the load to 12.5 grams and now you have a choice of 5, 6 and 7 shot sizes and thus a more effective cartridge.

I still love the Hull Cartridge High Pheasants in .410, as they are superb performers and always hit hard and pattern well. This is a magnum 3” cartridge this time, with a plastic wad and loaded with 19-grams of #6 shot, so roughly 188 pellets. Shooting at 30 yards this time, we had great density to the patterns and 150 pellets struck within 30”. The split showed 82 inner hits and the remaining 68 around the periphery. That tight choke and plastic wad certainly keep the pattern together.

If you are after a subsonic load, quieter but not silent, then the Lyalvale Express Magnasonic are always impressive. These show 17-grams of #5 shot and at 30 yards with the full choke, the Mozzy patterned 34 pellets in the inner circle and 68 pellets in the outer regions, giving a total of 102 pellets. Again, a nice tight pattern and hardhitting with the bigger #5 shot. So, squirrels beware!

I really like it, I think everyone should own a good little .410 pumpaction as it spices up those vermin trips to the farm and won’t break the bank either. This Model 500 .410 is reliable, lightweight, shoots good patterns and is cost-effective, shame about the non-scope mount option though.