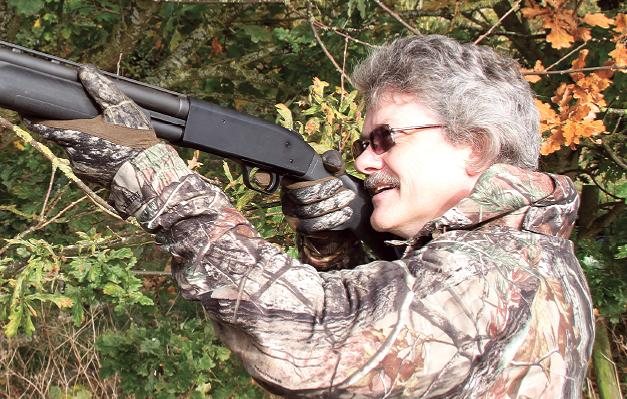 I have tested plenty of suppressed rifles over the years, be they full bore or rimfire and also a handful of shotguns. A suppressed shotgun usually takes the form of a single barrelled .410 cal., with a large over the barrel moderator that extends down to the forend.

York Guns offer a range of suppressed shotguns from single barrelled Baikals, to pump actions, ranging from .410 to 12 gauge and also their 20 gauge, which I had on test. These ‘Stealth’ models are all based on the Mossberg pump action Model 500 chassis; it makes sense to use these relatively inexpensive shotguns because of the additional costs of adding the silencer. Also, Mossbergs have a reputation for sturdiness, they aren’t the most refined of shotguns but they are reliable and are made to take the knocks. The barrel is ported and a sleeve added that also contains a one-piece baffle section.

Available in wood or synthetic stock, I had the synthetic version that further added to its usefulness as a serious vermin control tool.

Action All The Way

I wanted to test the 20 gauge version, as these give a good blend between noise reduction, weight, handling and range performance, which extends the range over the .410 version. The action remains unchanged in the suppressor version and is available as a Section 2 i.e. two shot only mag restriction and one in the chamber, or FAC version with the full load complement. The action is steel and finished in a tough matt blacked coating and the action top is drilled and tapped for scope mounts. This is actually not a bad idea, as with the moderator fitted the sight line is adjusted and so a single red dot or prismatic dot/ reticule sight would work well.

The safety is fitted back on the tang, typical Mossberg, which I like as it’s easily operated and viewed if ON or OFF, no in between.

The 20 gauge cartridges are loaded the standard way, down through the sprung loading gate and up into the forend magazine. Rack the forend to open the action and close and then load another in the mag or rack first to load the chamber and then two up the mag, both methods work. The bolt is black also and extraction is established by a positive twin claw extractor at the nine and three o’clock position. These gripped all the 20 gauge cartridges on test with no malfunctions and ejection is by a simple spur set into the left-hand side wall of the action that can be removed by a single screw from the outside. Once cocked and loaded, you have a manual override to unlock the action if required. A bolt release lever is sited on the left side just behind the trigger.

The Mossberg pump is ideally suited for suppression use, as the single barrel protrudes enough from the forend to allow a larger diameter moderator sleeve to be added. The original barrel is utilised and then heavily modified. The sound moderator sleeve is machined from one piece of high-grade aluminium and has a two-inch diameter and is 17 inches total length. It is fitted over the barrel and extends downwards by 10.5 inches from the muzzle and 6.5 inches in front of the muzzle. The moderator mounts to a threaded Ali bush that is welded to the barrel at the barrel lug. Total barrel plus mod length is 33.5 inches. There is an aluminium collar that fits around the muzzle end to support the sleeve and behind this on the forward section of the barrel there are ports. Here there are eight ports drilled through the barrel walls, four on either side in a row.

These are here to bleed-off the expanding gases from the firing process and thus vent rearward down the rear section of the moderator, cooling as they go to reduce the overall noise levels when they finally vent through the front end of the moderator.

To further enhance noisereduction there is a one-piece billet of aluminium, machined with four lozenge shaped apertures to each side (eight total) that form expansion chambers and baffle sections, to again slow the easement of the combustion gases. These then escape after the shot charge has exited the barrel through a 2cm hole in the front end of the sleeve. The barrel’s rib is machined down to accommodate the sleeve and on top is a silver bead for aiming. The sleeve is also blacked to match the action and synthetic stock work.

I chose the synthetic stock version, as this best suits the Stealth vermin credentials. With a black synthetic stock fitted and matt-blacked action you won’t be worrying about scratching this shotgun’s best walnut stock! The forend is nine inches long and has moulded in stippling instead of checkering and is actually quite grippy. The rear butt section is short though (for me at least) at 13.5-inches length of pull.

It is an ambidextrous design with moulded plastic twin sections glued together and feels a bit hollow to hold but can be shot from either shoulder, which is handy if using it in a barn or constricted space. There is a large, soft, black ventilated recoil pad to cushion the already mild recoil and a set of sling swivel studs is fitted.

It’s not unduly heavy at 8.25lbs, but that extra barrel length does make it muzzle heavy, which is accentuated by the lighter synthetic stock, whereas wood is heavier. However, you soon get used to it. No surprises in operating the Mossberg, which gets smoother the more you use it.

Having a sound moderator fitted it is obviously best to use subsonic ammunition for maximum sound reduction, but you can safely shoot full-power loads through the Stealth as well, but these will be noisier. The mod has been designed for use with both plastic and fibre wadded loads also. I had a choice of 20 gauge cartridges available, I bought the majority of them from Just Cartridges, which had a very good range of all types of shotgun shells.

Subsonic-wise, which is where I concentrated, I had Eley, Lyalvale, Hull Cartridge and Game Bore subs to try. I set up some pattern boards at 30 yards to ascertain shot pattern density with most of the loads. You have to ignore the silencer diameter, as the bead sits on the rib; with both eyes open it’s easy to do, otherwise the shot pattern will shoot low. The outer sector is 30 inches and the inner sector is 15-inches diameter to give an idea how even and dense the patterns were.

These are 24 gram loads of No7.5 shot, fibre wad with a 67mm case. When shot, they were nice and quiet and gave an even pattern with only a slight bias to the 6- 9 o’clock quadrants. Total shot count was 298 pellets with 182 in the outer sectors and 116 pellets in the 15-inch inner sector.

These are 30 gram loads of No 5 shot, fibre wad with a 65mm case. Total shot count on the boards was 216 pellets, with a very even and welldistributed shot pattern, no bias.

These are 21 gram loads of No 7.5 shot, fibre wad with a 67.5mm case. A little noisier, a bit more of a boom, but a total pellet count of 262 pellets with 180 outer sector spread and 82 inner sector concentration. Here there was a distinct bias to the 9-12 o’clock sectors.

These are 23 gram loads of No 7.5 shot, fibre wad with a 65mm case. Good, quiet, dull report, just what you want and very dense patterns with the best overall shot count of 304 pellets. 155 of which were in the outer sectors and 149 in the inner sectors, so almost the same density of shot, and so no holes for pigeons, rabbits or clays to escape! Very slight bias to 6-9 o`clock position.

I was impressed with the overall noise reduction of the Stealth and any concerns that shooters would have being a subsonic load, with regards range, are largely unfounded. As can be seen from the pattern results, at 30 yards most of the loads shot good overall tight patterns, although as usual 30 yards is max anyway for this type of shooting.

You soon got use to the overall length and adjusted sighting pattern to connect with the game and at £645 is good value for money.