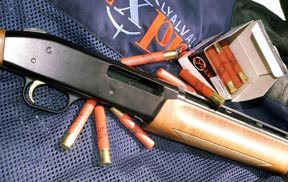 It would seem that for most people, their main experience of .410s tend to have been as children, these diminutive shotguns are often regarded as ideal for junior to cut their teeth with. Likewise and for those who don’t actually know, the .410 is the only shotgun and cartridge that’s known by its calibre not its bore or gauge.

Enjoying an enthusiastic following, especially in America, whilst the rest of us move onto 20’s and 12’s as soon as possible, there’s an actually clay shooting world championship for the .410’s. Those sufficiently experienced with them are more than able to extract levels of performance way in excess of the cartridges theoretical bounds, which if nothing else demonstrates one overwhelming point. If you’re accurate, you’ll hit most things with a .410.

Likewise, besides the ubiquitous .22 rimfire, it’s rare to find a gamekeeper who doesn’t have a .410 within their vermin control armoury. Given its diminutive size and almost effortless use, numerous rats, bunnies and other associated ner’do wells fall victim to this little cartridge seemingly on an hourly basis. Equally, if you need to get some practice in, the average price of a box of 25 shells is £1.72 for 2½” or £1.90 for 3”, so you can afford to get good.

Whilst you can acquire yourself some extremely elegant examples of the .410, if it’s a true working shotgun you’re after, you’ll go a long way to better Mossberg’s 500E pump-action. Tipping the financial scales at a mere £329 in pure cash terms, this little gun is nearly as cheap as the ammunition it uses. Likewise, when you appear at your local clay shoot, I guarantee you’ll have a cue of inquisitive shooters all wanting a go, a variety of Coniston SG’s regulars eagerly waiting to try their hand.

Existing Mossberg owners will feel immediately at home with the 500E, as the .410 is a scaled-down version of the more familiar 12-bore version. In the case of the tester, the 24”, fixed, Full choke barrel is toped off with a 9mm vented rib complete with a white bead that sits 20mm back from the muzzle which in turn is complimented by a smaller brass pip further back. Whilst this might seem more Trap gun like to many, this bead format actually allows the user to virtually rifle this .410 on static targets, reinforcing its working underpinnings.

One practical feature is the tang-mounted, ambidextrous safety catch. Located where you place your thumb, this sliding catch is fast and easy to operate. Add to this the mandatory action release catch that all pumps use and the layout is pretty standard. Useful too is the skeletonised shell lifter, which sits tight under the bolt when the action is closed. This, in the event of a feed jam allows you easy access to the cartridge and shell stops to clear it quickly. One thing common to all Mossberg pumps is the fact that the barrel nut, which attaches the tube to the gun is fixed and screws directly into the front of the magazine.

Now for just over £300 nobody’s expecting high grade walnut but Mossberg have managed to ensure the woodwork is attractive (if a bit light), well chequered, cleanly finished and moreover, fits exactly as it should. The forend is of a good and practical size and well rounded whilst the scaled down butt is reasonably comfortable, given its reduced dimensions. Drop at comb and heel is 1½” and 2¼” respectively whilst length of pull is a reasonably secure 14 1/8”. Although short it’s more than manageable, given the .410’s almost imperceptible recoil, offset even more by the fitment of a large, vented recoil pad.

The receiver is what you might refer to as one click off shiny. Bereft of any form of decoration, only the Mossberg script and model information embossed into the floor of the action just forward of the loading gate. However, for those who yearn for some bright work, the black anodised trigger guard does a more than adequate job of protecting the smooth gold – plated blade that breaks at 6lb 6oz.

As ever I went to Coniston Shooting Grounds. Loading up with Express’ 2½” .410’s, the first thing you have to remember is that on average you’ll only be discharging a 140 or so pellets of 7’s into the air. Most who use the 410 calibre tend to opt for a 3” #6 load, as that seems to strike a good compromise for this diminutive calibre. But what ever way you go, remember this accuracy is an absolute necessity and not something you hope for!

Like all American pumps and autos, the Mossberg shoots slightly high, especially noticeable when shooting at a static target. Aim dead-on and you’ll see the ground kick up about two feet behind your intended object. Likewise on rabbits, in front and this side of it will result in a clean kill. However, on close-in flying birds the elevation of the shot does let you to keep your target well in view allowing for quite a relaxed style when the clay’s an incomer.

With full choke, the little Mossberg hits surprisingly hard whilst the 6lbs 4oz weight plays its part in refining the 500E’s swing. Equally, the gun will cycle as fast as you can pump the forend, ensuring that if you missed with the first round, there’s every chance you’ll nail it with the second or third. What I would suggest is that if you’ve got the paperwork you opt for the 5-shot Section 1 version. Likewise, if you’re going to transport the 500E around in the back of a 4x4 or across the front of a quad, go for the full synthetic version.

But whichever you decide to buy, whether as a functional tool or as an inexpensive shotgun for junior, I promise you it won’t be long before most of the rounds fired through it are by you. Also, if you’re a member of a DIY shoot, ownership of the Mossberg is the perfect excuse to volunteer for controlling the vermin providing you with some additional and often entertaining out of season sport.

So for around the cost of a new set of tweeds or shooting suit, wear last year’s and invest in a Mossberg .410. The rats won’t be too delighted but the 500E will put a smile on your face and dramatically improve your shot gunning precision for not a great deal of outlay.