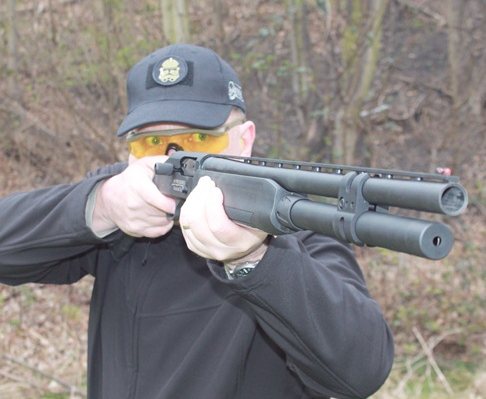 Anyone who is a fan of shooting must have heard of Jerry Miculek, he is a legend and someone who knows about shooting fast. Well, he has teamed up with Mossberg to make a practical shotgun that is capable of winning events ‘straight outof- the-box’: the Mossberg 930 JM Pro Series Tactical Class. It’s a bit of a mouthful, but when a guy such as Jerry goes in the design room with shotgun giants like Mossberg, you know it is going to be a bit special.

The gun has everything a practical shotgun should have. First the basics – the Mossberg 930 is a gas operated semi automatic shotgun with a tubular magazine under the barrel. It’s chambered in 12 gauge for both 2.75-inch and 3-inch long shotgun cartridges. The stock and forend are black polymer, the receiver and trigger guard are anodised aluminum, and the cylinder bore 24-inch barrel and magazine tube are phosphated steel.

Unlike a lot of modern shotguns the Mossberg does not have a rotary bolt, such as found on my Benellis. Instead the bolt locks into the barrel extension using a large single locking lug. The gas system bleeds off halfway down the barrel. This high-pressure gas is directed against an annular gas piston. This piston surrounds the magazine tube, the gasses force the piston backwards, which then presses against action bars like in a pump action shotgun. The action bars then unlock the single massive locking lug and drive the bolt backwards. As the bolt moves back, it compresses a heavy mainspring inside the stock. The empty shell is pulled out of the barrel by the extractor and ejected. The mainspring returns the bolt forward to chamber the next round, and so on.

The operating controls on this gun are where it shines and JM’s influence can be seen. It has a very larger rotating cocking handle on the bolt. This is 21mm long and 16mm in diameter. You can operate this with the left hand if you are a right-handed shooter keeping your trigger hand in position – trust me this makes a difference. Also the bolt release button below the bolt is raised and enlarged, the 8.7mm diameter button sticks out by 5mm. The safety catch is on the top of the tang and is therefore ambidextrous. Mossberg semi automatic shotguns don’t go for pistol-grip styling, because they don’t work well with the Mossberg’s tang mounted safeties. One design feature that intrigued me greatly is the small cocking indicator which protrudes inside the front of the trigger guard – when the bolt is closed and the hammer cocked, this rounded steel pin sticks into the front of the trigger guard.

It doesn’t stick out if the bolt is open or the hammer is already down. What this does is let you check if the gun is cocked without taking your eyes off the target or your hands off the gun, neat.

It’s loading where competitions are won or indeed lost, and that’s why the loading gate of the shotgun has beveled edges. The difference this makes to the loading is huge. Practical shotgun owners usually have to spend hours with a Dremel to get the loading gates smoothed out, it’s already done for you here on the 930 JM.

Speaking of loading, the gun takes nine cartridges in the magazine and one in the chamber, making it 9+1. This puts it in the standard class for practical shotgun.

The magazine extension tube has a clamp fitted near the end of the barrel which fits around the mag and the barrel. Be very careful not to tighten this up too much as it will crush the magazine and affect the loading.

The tube itself sits 12mm or half-inch back from the end of the barrel. The pull length is 355mm or 14-inches and Mossberg also give you shims to alter the fit of the gun. There are four shims with four matching spacers for the rear stock, a 0.125, 0.250 and 0.375 rise and, lastly, a 0.250 drop, all of which means you can make the gun shoot where you are looking. I say that as I do not aim when I shoot practical shotgun, unless it’s a slug or buckshot stage shot on paper targets or a long, long plate with standard shot.

Speaking of slug etc. the 930 JM also comes with an adjustable choke system, three chokes are provided: Cylinder, Improved and Modified chokes along with a key to fit them, Mossberg really have given the shooter everything them need in one box, even a safety lock and plastic bright orange barrel safety flag device.

The standard front fibre optic rod sight is 2.3mm in diameter and 15mm long, and it does stand out well. You can also fit a sight rail as the top of the action has four screw holes which are blanked off with slot headed cut off screws.

I took the 930 down to the range with a selection of cartridges and some steel plates to see just how it shot, and just as importantly how easy it was to speed-load. I did have to fine tune the magazine extension, but every shooter with such a gun knows they have to do this. Once done the gun just performed like a demon. The controls came as second nature in a very short time and it was easy and quick on re-loading. I could grab four cartridges off my belt and stuff them in as quickly as my slicked and tricked-up 12 gauge which I have shot for years.

I tried it with low recoil rounds too and these worked, even before the gun had fired a box of ammo from new. The recoil was tame compared to my inertia-operated guns and the thick rubber butt pad cuts down on this even more. It was a pleasure to shoot and the safety under the thumb was in a much better place than on the rear of the trigger guard like most practical guns; when it’s behind the guard you have to take your hand off the stock to put it back on.

Finally, shooters in the UK have a practical shotgun they can buy and shoot without modification. They are literally flying off the shelf at York Guns, and at £730 it is really great value for what it does. I had to wait my turn to get hold of this one, and I can really see why now having shot it. Well done Mr Jerry Mc and well done Mossberg, it’s a corking gun!